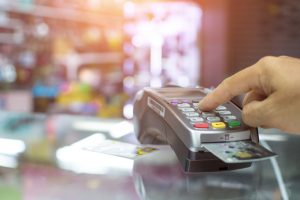 I spend a lot of time thinking about money. That shouldn’t come as a shock. After all, I spend most of my time writing about investing in startups, crypto and cannabis stocks. And investing is all about making money.

But even before I joined Early Investing, I spent much of my time thinking about money. That’s because I worked in industries where digital payments were the key to success. And when you rely on digital payments, you worry about how people will pay for services – and how money moves around the payments ecosystem.

And, to put it charitably, the payments ecosystem is a hot, stinking mess.

The best way to think about payments is to start with cash. Cash is terrific – especially if you have access to the banking system. I can go to the bank and withdraw cash. Then I can go to 7-Eleven and buy some donuts and a cup of coffee with that cash. It doesn’t cost me anything to give 7-Eleven money. And it doesn’t cost 7-Eleven any money to accept my cash. There’s no transaction fee for cash. And the transaction is instant. The money moves from me directly to 7-Eleven.

But cash also has plenty of drawbacks. As a consumer, you don’t always have access to cash. And cash takes up a lot of space. Carrying the cash you might need for a week, or for larger purchases, can be impractical and unsafe. And for businesses, cash transactions make little sense. Paying employees with bags of cash just doesn’t work. The same is true for paying suppliers and vendors. Cash payments are wildly impractical. That’s why we have a digital payments system.

In theory, moving money around digitally should be pretty easy. After all, if you can watch movies on Netflix, you should be able to move money around.

Unfortunately, moving money around is far more difficult than it needs to be.

Charging for the Right to Pay

The biggest problem? Interoperability. Banks and financial institutions, through evolution and design, have created individual systems that can’t communicate directly with each other. That means when you pay $50 to buy something on Amazon using a debit card, the money doesn’t move directly from your bank account to Amazon’s. Instead, the money gets routed through middlemen who take a cut of the transaction.

Now, it probably doesn’t bother you that Amazon is losing a little bit of money on the transaction. But now let’s think about a convenience store. For the sake of this discussion, we’ll call it the AG Convenience Store.

But let’s say you pay via a credit or debit card. Most credit cards charge the store 2% to 4% of the transaction or $0.40 (whichever is higher). In this case, the $0.40 would be higher. And AG would end up with $0.22 in profit. When you factor in overhead and the cost of labor, AG ends up losing money on the transaction.

That’s why you see many convenience stores requiring you to spend at least $10 if you’re using a credit card. Some gas stations charge extra for fuel for people paying by credit card so they can pass the transaction cost on to the customer.

These transaction fees hurt merchants and customers alike. And there’s just something wrong about charging people for the right to accept or pay money. It’s un-American.

On top of that, the money from the transaction won’t show up in the store’s bank account right away. That could take a few more days.

Another way to think about the movement of money is to think about payday. In theory (there’s that phrase again), if you’re receiving a direct deposit, this should be a simple process. Your company hits a button. And the money moves from its bank to your bank. But by now, you’ve figured out there’s nothing easy about this process.

For direct deposits to actually work, companies need to send the payments out a few days early. That way, the banks can verify and approve the transactions so you’ll actually be able to access your funds on payday.

The inability to move money instantly is a serious problem. Convenience stores (like AG), for example, often pay more for the goods they sell. That’s because suppliers don’t trust that their payments will clear in a couple of days. So they charge them more money. But if the payments cleared instantly, there would be no need for a premium. And these stores could charge consumers less.

This process replays itself over and over throughout the economy and supply chain. From the automotive industry to the agricultural industry, the inability to move money instantly and cheaply causes all sorts of problems. It’s a mess. And it doesn’t have to be that way.

Banks know it doesn’t have to be this way. That’s why they invested more than $1 billion in a system to fix it. Their new system, built under the Clearing House Payments Company, will move money around the banking system ecosystem instantly – through a third party. It will also cost money to use the system – money credit unions, e-commerce businesses (like Google) and others would rather not pay. And I don’t blame them. It should be easy to move money around instantly in the digital age. And people shouldn’t have to pay through the nose to do so.

The Fed agrees with me. It recently announced it’s building its own instant payments system called FedNow. In theory, the system will be ready to go in 2023 or 2024. But the government isn’t known for delivering products on time. And competition from the Fed should drive down Clearing House Payments prices. Big banks are not happy about that.

Of course, crypto could render both FedNow and Clearing House Payments obsolete by 2024. It will probably take longer than that. But still, moving money around quickly, cheaply, efficiently and securely is one of the things crypto is designed to do. And who would you trust – the banks that deliberately created a messy system so they could profit from it, the government or a decentralized cryptocurrency that can’t be controlled by a single entity?

I don’t know about you, but right now, I’d trust a decentralized system way more than either the banks or the government.

The post A Broken Payments System That’s Bad for Everyone appeared first on Early Investing.

Bitcoin Is The New Gold. Or Is It The Other Way Around?
Scroll to top