Crypto Blog
You are here: Home / Crypto Blog / Bitcoin / A New World for Startups? My Five Intrepid Predictions for 2018 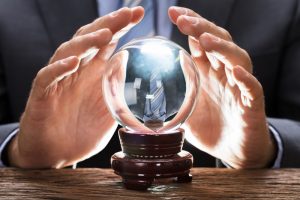 My crystal ball doesn’t always get it right. But I like dusting it off at the beginning of the year and having a little fun with it.

There’s no dearth of issues on people’s minds…

Is a crash imminent? What will the new hot technologies be? What industries have lost their luster?

And, of course, what inside tips do I have about getting the most out of your startup investment dollars in 2018?

Here are my five intrepid predictions for 2018…

The Crash Will Continue

What? You hadn’t noticed? With the stock market still going up and cryptocurrency hogging everybody’s attention, this has been about the quietest implosion I’ve ever witnessed. But, believe me, it’s real.

Our friends at PitchBook have been tracking the numbers. Since 2014, the number of early- and seed-stage rounds worldwide has nearly halved, from just over 13,000 to more than 5,000 today. That’s a stunning 56% drop. 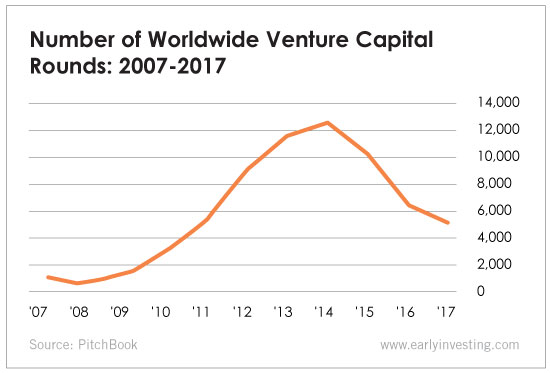 The shift to mobile, cloud and software attracted billions of dollars these past few years, but these aren’t new trends or business models anymore. Suddenly, new ideas aren’t as plentiful or as fresh.

Case in point: The prospect of funding consumer apps no longer excites investors.

The Next Hot Technologies Will Finally Meet Expectations

These include medical and healthcare, smart home, automotive, factory and voice-recognition-related applications.

These technologies were expected to make an impact earlier. But tech problems took longer to resolve than expected. Those are finally getting ironed out.

I personally think medtech is going to explode. The medtech market should be getting a boost from a host of advancing technologies whose time has come. I’m keeping an especially close eye on robotics, wearables and digital health, genomics, and artificial intelligence.

Big Data and Analytics Will Emerge

The last three companies we’ve added to our portfolio (for our paid members only) generate their own proprietary data. Big data, analytics and artificial intelligence will have all kinds of uses – from healthcare to industry to advertising – in the years ahead.

For example, one of the companies we recommended – a business-to-consumer-to-business startup – developed an extremely user-friendly way for companies to survey their customers and provide instant analytics with the results.

Fintech 2.0 Will Continue to Make Inroads

According to TechCrunch, traditional financial technology, or fintech, funding activity has dropped nearly 10% since 2014. This year the drop will be even more pronounced.

That’s because exciting new fintech technology is centered on the blockchain. We think it has immense upside (no secret there for those of you who have read our recent articles). But much of the raising is done outside traditional venture capital channels via initial coin offerings.

We’ve made a few deeply researched cryptocurrency recommendations to our members that have already scored sizable profits. And we’ve made a couple of “pick and shovel” recommendations that could play a key role in moving blockchain technologies toward mass adoption.

With $98 billion to spend, the Vision Fund is the largest technology investment fund ever. Sequoia’s new $5 billion mega-fund pales in comparison. Masayoshi Son, head of SoftBank, said in October that his company could commit as much as $880 billion to tech investments in the coming years!

That’s a lot of money sloshing around startup land. Add the global sovereign wealth funds that are just now looking at startups with serious intent and China’s “PayPal Mafia” equivalent (Alibaba and Tencent, which are spending big money on startups) and it’s hard to imagine the valuations of late-stage startups NOT going through the roof.

And that, my friends, makes the seed and early rounds the places to be.

In the hunt for bigger game, investors are leaving this space – which is all the better for us. When the big money leaves, it drives valuations lower and increases quality and choice for the investors who remain.

More than ever before, there’s no reason to compromise on entry prices. I’m not necessarily looking for incredible bargains. But this year I expect to be overwhelmed by a flood of quality startups raising funds at extremely reasonable valuations. Which means only one thing…

It should be a very good year for early-stage crowdfunding investors.

The post A New World for Startups? My Five Intrepid Predictions for 2018 appeared first on Early Investing.

Cryptocurrencies, Internet Both Grappling With Regulation