Crypto Blog
You are here: Home / Crypto Blog / Bitcoin / After Recording A 3-Week High, Bitcoin Loses $700: The Crypto Weekly U...

Bitcoin’s price went on a rollercoaster during the past week. After surging to its three weeks high at slightly above $7,400, the cryptocurrency saw a sharp decline upwards of 5% over the past 24 hours. This got it to where it currently trades at around $6,880.

During the last week, altcoins managed to hold their grounds as Bitcoin’s dominance decreased by about 1%. It’s also worth noting that two of the top 10 cryptocurrencies, Bitcoin Cash and Bitcoin SV, saw their halvings take place on Wednesday. However, so far, this hasn’t caused any positive change in their price. On the contrary, both of them are down more than 10% in the last 24 hours.

On another note, the spread of the novel coronavirus (COVID-19) continues as there are more than 1.6 million cases worldwide. The US has taken the unfortunate lead, as the number of infected people there increases every single day.

Countries continue to be in recommended or mandatory lockdowns until the situation gets better. This has already taken its toll on the markets as more than 6.6 million job loss claims were filed in the past week alone.

As governments continue to move forward with their plans to print money to help their economies, more people are afraid that this would have a devastating deflationary effect. As such, some experts, Tim Draper included, believe that this is exactly Bitcoin’s time to shine.

It remains interesting to see if the halving will have any effect on the price as it’s now one month away. 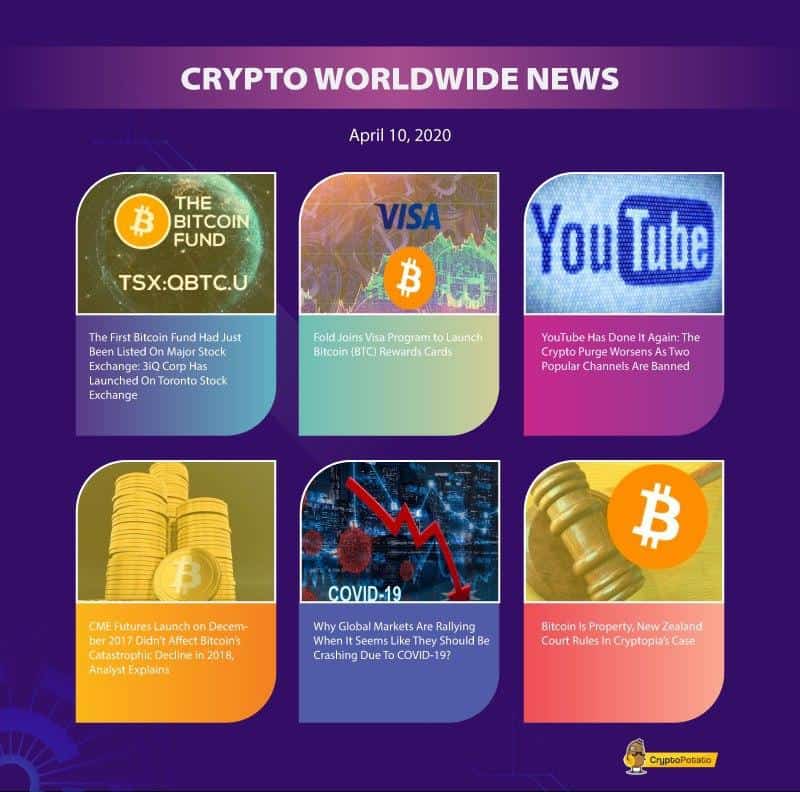 Fold Joins Visa Program To Launch Bitcoin (BTC) Rewards Cards. In another major step for blockchain adoption, the bitcoin-friendly shopping app Fold has partnered with Visa to launch a debit card that would provide users with cashback in the form of BTC. It will launch in the summer, but there’s already a waiting list opened.

YouTube Has Done It Again: The Crypto Purge Worsens As Two Popular Channels Are Banned. YouTube, the world’s most popular video-sharing platform, resumed its cryptocurrency purge. However, unlike before, this time, the platform straight off terminated certain crypto-related accounts, raising major concerns in the community.

Bitcoin Is Property, New Zealand Court Rules In Cryptopia’s Case. Upon reviewing the upcoming distribution of cryptocurrencies left in the storage of the hacked exchange Cryptopia, a judge from New Zealand’s High Court classified Bitcoin and other altcoins as property. In a step forward, users of the exchange can claim the remaining funds.

CME Futures Launch in December 2017 Didn’t Affect Bitcoin’s Catastrophic Decline in 2018, Analyst Explains. According to a popular Bitcoin analyst, the launch of Bitcoin futures trading contracts on CME and CBOE back in December 2017 did not affect its price. Instead, he thinks that the price of BTC back then fell perfectly into his stock-to-flow model.

Why Global Markets Are Rallying When It Seems Like They Should Be Crashing Due To COVID-19? Despite the fact that the whole world is under lockdown and millions are losing their jobs every single day, stocks are rallying over the past few days. While some believe that this may be a result of the fact that the crisis is already priced in, others consider it to be a “dead cat bounce.”

This week we have a chart analysis of Bitcoin, Ethereum, Ripple, Waves, and Matic – click here for the full price analysis.