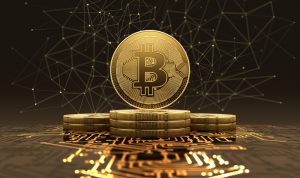 He put a number on the potential value of the blockchain market.

If you think, as I do, that blockchain technology will expand from dozens of uses to hundreds and then thousands, how can you calculate a precise market value for that?

It’s like Thomas Edison trying to predict in the late 1800s how much the electricity market would be worth a few decades into the 20th century.

Did he realize at the time that almost everything we now make and use, not just lights, would be electrified?

Probably not. How could he?

(And the one thing he thought would be electrified – vehicles – didn’t catch on until more than 100 years later!)

I believe at some point in the future (10 years? 20 years?), most of the services we’ll be using on a daily basis will be enabled by the blockchain.

Again, how can you put a price on such a ubiquitous technology?

A Report From Deep Inside Wall Street

It doesn’t come from crypto investors talking their own book… initial coin offering companies hyping their future growth… or blockchain evangelists espousing best-case scenarios as a given.

Mitch Steves, the author of this report, is a traditional Wall Street equity analyst. He works for the RBC Capital Markets subsidiary.

His only connection to blockchain and crypto?

Among the companies in his bailiwick is NVIDIA because it makes graphics processing units for mining cryptocurrency.

By the way, he says the $4 billion-plus market for mining cryptocurrency is here to stay.

Steves says that blockchain technology is misunderstood – that store of value and payment use cases are the most commonly cited but “the least interesting.”

The single most “positive technology” breakthrough is the one staring us in the face: The blockchain, the underlying technology, HAS NEVER BEEN HACKED.

(And, in my opinion, it WILL NEVER be hacked.)

This is no small thing. Steves compares Box, a content management platform, with Filecoin, a decentralized blockchain equivalent, to highlight the differences…

With Box, your data is owned and controlled by a third party that has access to your information (a photo loaded can be retrieved by anyone with access to Box servers – employees). With Filecoin, your storage is distributed and decentralized, making the holders unable to retrieve your photo (they would need to hack every computer on the decentralized network – blockchain). Your information is now secure, and without your private keys, it cannot be accessed.

He says that same concept can be applied to a “wide variety of decentralized applications (aka ‘dapps’).”

What Steves is saying is reasonable and, frankly speaking, not entirely novel. People who aren’t paying close attention may be confusing hacks of exchanges and individual wallets (which has happened) with hacks of the blockchain itself (which has never happened).

But insiders have well understood the security benefits of putting data, transactions, assets, documents and sensitive information on the blockchain… and how the blockchain makes it fast, easy and secure to track these things.

But it’s nice hearing this confirmed by a big bank with no vested interest in the crypto or blockchain markets.

And because Steves hails from outside the crypto community, he openly acknowledges the “many risks to crypto.” No rose-colored glasses on him.

Among the risks, he lists the possibility of an attack if a single entity were to garner more than 50% of the computing power (which, I should add, would be near impossible).

Other risks mentioned? Coordinated attacks to manipulate prices… and the potential for smartphone wallet hacking.

The Worth of the Market?

How he arrives at this big round number turns out to be the most disappointing part of his 38-page report.

He basically took a third of the roughly $30 trillion in assets held in offshore funds and gold. Just a rough stab, in other words.

But perhaps that’s as it should be. At this early stage, trying to do anything more would be a reach.

We simply don’t know how big this number will be. Anybody who says differently is lying to themselves or everybody else.

However, I believe it will be a big number. Blockchain technology is driving a surge of innovation in the development of new protocols and blockchains.

There’s a long way to go. And nothing is a given at this point. But decentralized computer technology has the potential to reinvent huge swaths of the global economy.

With that kind of upside, even a modest investment could yield quite a large return.

When Product Origins Matter (and When Consumers Don’t Care)

Founders Can Just Say No to VCs

Why Startups Should Be in Every Portfolio

Bank of Japan Turns Back on State-Issued Cryptocurrency