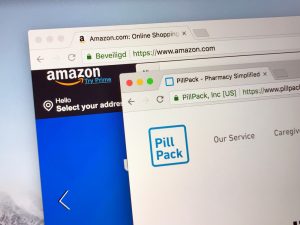 Our kids packed their bags about a decade ago and left home.

We’ve “replaced” them with our three dogs and a cat. Inviting them into our lives has worked out pretty well.

But I don’t remember issuing an invitation to Amazon. Guess it didn’t need one. This weekend – a typical one for us – is as good an example as any.

On Saturday, we got a package from Amazon – something my wife ordered. Don’t ask me what. We get three to four packages a week from the company. I stopped keeping track a long time ago.

We shopped at Amazon subsidiary Whole Foods Saturday afternoon. And Sunday evening, we binge-watched Amazon Prime’s (Prime Video) original show Goliath. (It stars Billy Bob Thornton as a brilliant lawyer who spends more time in his favorite bars than in the courtroom. It’s a great show. Check it out.)

Amazon has done such a great job insinuating itself into our daily lives that it left me wondering if there are any big parts of our lives remaining for Amazon to take over.

I just got my answer – our daily diet of pills. Amazon bought PillPack last week for a cool $1 billion.

PillPack mails out medications. Its niche is that it presorts them by day. That’s particularly useful for seniors, who can have trouble keeping track of the multiple pills they take every day.

So now Amazon is entering the online pharmaceutical delivery business – a $450 billion space, according to Pew Research Center.

The immediate reaction from “experts” has been overwhelmingly positive. “They really have deep skills and ability to increase the efficiency of the supply chain. I think it’s the perfect entry for them into the prescription drug field,” said Marianne Udow-Phillips, executive director of the Center for Healthcare Research & Transformation at the University of Michigan.

Most other comments were equally effusive. “This one plays right into everything they know how to do,” former Apple CEO John Sculley said. “It’s in their wheelhouse.”

It’s just a hop, skip and a jump to go from the perfect market entry strategy to a future with Amazon dominating the pharmacy space. “In our view,” said Neil Saunders, managing director of GlobalData Retail, “this is only the first play in what will be an increasingly aggressive strategy… [It’s] incredibly bad news for traditional players like Walgreens and CVS…”

I get it. Amazon is one of the biggest and savviest players at this moment. But in this case, Amazon doesn’t deserve rave reviews.

On a scale of 1 to 10, I’m giving Amazon a 4 on this acquisition, and only because I’m feeling generous. Here are my five reasons why.

Bottom line: From here on in, its choices become much tougher.

Instead of ushering the pharmacy business into its high-speed, high-convenience future, Amazon bought a mail-order company. That’s about as old-school as you can get.

The retail pharmacy business is growing by $20 billion a year in the U.S. By contrast, drug delivery via mail orders has declined in the past five years.

I expect prescription usage will continue to grow, thanks to aging boomers, increased life expectancy and an expanding universe of people eligible for the Medicare prescription program and new drug therapies.

It’s no wonder Amazon is drawn to this market’s massive size and growth. It’s also wary of its complexity.

PillPack offers some convenience… it gives Amazon some industry know-how…

Kicking the Can Down the Road

It’s not a complete waste of time and money. But it’s a tentative half-step undertaken by a company that could easily afford the $1 billion purchase price and clearly wants to keep its options open.

Amazon smells a vulnerability that is very real.

Traditional pharmacies are overripe for disruption. According to a 2013 industry study, the median wait time at a pharmacy is 45 minutes. A third of visits require a return trip.

The business model is clearly outmoded.

But Amazon, for all its strengths and past success in moving into new markets, is not particularly well-equipped to take on the pharmacy industry.

It does, however, raise a fascinating question. If not Amazon, then who?

Mailbag: Decriminalizing Marijuana, Bitcoin Halving
Bitcoin Offers All the Benefits of Gold and None of the Drawbacks
The SEC’s Crypto Market Manipulation Fears Make No Sense
Medicine’s Future is a Good Investment
Massachusetts Turns to Marijuana to Stay Warm
The World Bitcoin Was Created For
Profiting Off Misunderstanding
SoftBank Is No Longer Getting a Pass