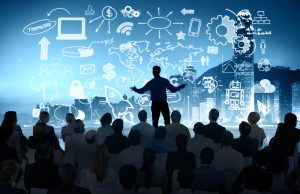 The city was in the midst of a brutal heatwave, the smog was heavy in the sky, and crypto markets were sliding downward for the second day in a row.

Despite some adverse conditions, the meeting was positive and constructive. We came out of it more convinced than ever that the industry will survive this downturn and come out of it stronger. Naturally, some of the weaker coins won’t survive, but those that do will be better for it. The projects that survive and thrive will come out leaner, tougher and more committed to their mission.

The event was put on by Republic, one of the few platforms in the world conducting regulated and legal coin/token sales. Republic has done three token offerings so far, and each has sold out quickly.

These crypto investment offerings were conducted using what is known as Regulation Crowdfunding (aka equity crowdfunding or Reg. CF). And the reason that Republic’s first three offerings sold out so quickly is currently, you can raise only up to $1.07 million in Reg. CF offerings. (There is an ongoing effort to raise this limit to $5 million. If you’re feeling motivated, contact your Congressional representative.)

OK, let’s get back to the event itself. The first session was a fascinating one titled “The Death of the Main Sale.”

Some background is required here. “Death of the Main Sale” is a reference to the “death” of initial coin offerings (ICOs) in the U.S. and much of the world. You see, toward the end of last year, people started to get concerned about the ICO market. Projects were raising huge amounts of capital (more than $500 million in some cases) in unregulated token/coin sales.

Many observers said it was likely that these assets would be considered “securities” like stocks. And that the SEC and/or other regulators would eventually step in and put a stop to them.

So all of a sudden, we started seeing warnings like this on token sale pages: WE CANNOT ACCEPT USERS FROM NORTH KOREA, IRAN, CHINA OR THE UNITED STATES. At first it seemed like a bad joke.

But the ICO market quickly slowed to a trickle. And almost all sales since late last year have excluded U.S. retail investors.

So for about the last year, the only U.S. investors participating in token sales have been venture capitalists, hedge funds and other institutional or accredited investors.

That makes the current ICO market a lot like the old private equity world, with only wealthy investors allowed to participate. Republic is looking to change this and open up crypto and startup investing to everyone.

So, much of last week’s discussions focused on how to move toward a system where everyone can invest in a regulated, yet efficient, manner.

One of the big topics was raising the Reg. CF limit from $1.07 million to $5 million, or even $20 million. This would allow for much larger rounds of equity crowdfunding and larger rounds of regulated token/coin offerings that could fund entire projects.

This would be a huge step forward for retail investors who want to invest in private startups and regulated token offerings, as well as entrepreneurs who want to raise money in a more democratic fashion. In the future, we’ll look for ways the Early Investing community can support these important initiatives.

Overall, RepubliCon was a great event, and I learned a ton. Most importantly, I learned there are some very serious efforts taking place to move this industry forward. I talked with people building “security token” platforms, which will allow for the issuance and trading of tokens that represent an ownership stake in a company (just like a stock). There’s a ton of potential here to create greater efficiency and security in the issuance and trading of stocks.

If you’re interested in seeing Republic’s upcoming crypto and equity offerings, you can sign up here and view its current offerings here. This is a platform to pay attention to. It has top-tier deal flow in the equity crowdfunding world. And I can’t wait to see what it does next.

Have a great weekend, everyone!

Startup Investments Can Be a Good Inflation Hedge