Bitcoin’s price made yet another positive week of continuous gains. In the past seven days, BTC is up more than 4%, finally breaking above the essential technical and psychological resistance of $10,000. The price shot up to as much as $10,500 but failed to claim this level and retraced to where it currently trades at around $10,200.

As it stands, Bitcoin might need some more time to regain its momentum and try again for the crucial ascending trend-line resistance. In any case, it’s important to pay attention to the $10,000 support level from below and the $10,500 resistance from above, which is also this year’s high.

Altogether, the entire cryptocurrency market performed very well. It crossed $300 billion for the first time in six months, as altcoins continue to mark serious increases. BTC’s dominance is declining, however, which signals that altcoins are, indeed, booming.

Ethereum (ETH) has been on the go for the past week, gaining more than 23%. Ripple is also catching up to the party with 17% weekly increases, while Tezos (XTZ) remains the absolute champion, charting an increase upwards of 50% in the past week alone.

The market’s recent performance has most definitely caught retail attention again. Google queries for the critical phrase “buy Bitcoin” are at their highest level since last June. Moreover, it appears that Bitcoin and cryptocurrency trading books comprise almost 20% of Amazon’s best sellers in the “Online Trading & Investing” section. This could be a serious sign that the market is currently moving in the right direction.

At the same time, Steven Mnuchin, the U.S. Secretary of Treasury, recently said that the country plans on rolling cryptocurrency “requirements” soon. They will supposedly aim to push technological advancement while also preventing cryptocurrency-related fraud.

It remains very interesting to see how the market will perform in the coming months as we get closer to Bitcoin’s halving. 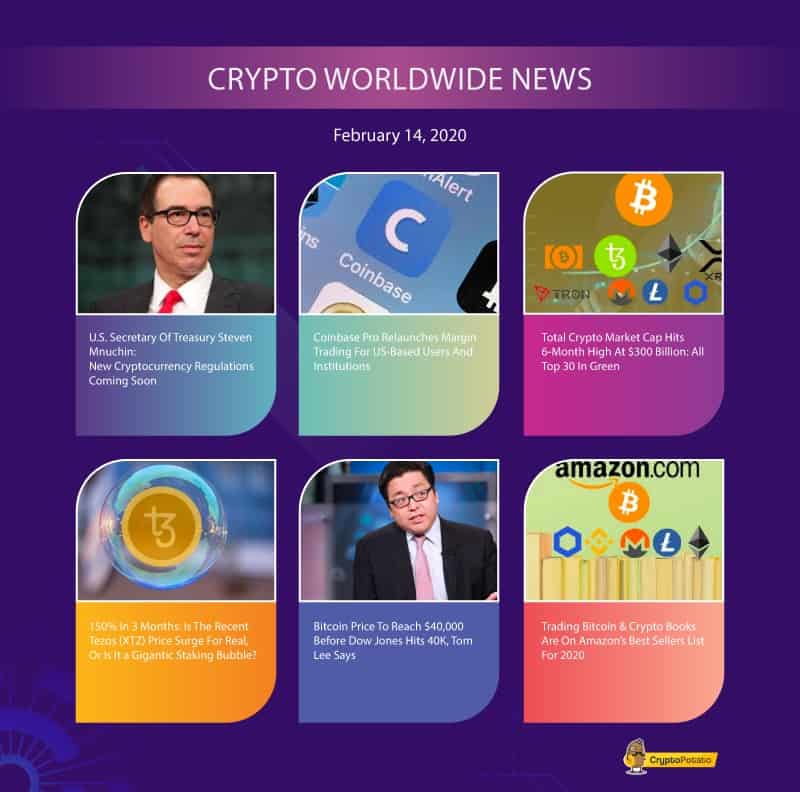 Coinbase Pro Relaunches Margin Trading For US-Based Users And Institutions. The leading US-based cryptocurrency exchange, Coinbase, has relaunched margin trading for traders and institutions in the States. The new feature will be available on Coinbase Pro, allowing U.S. citizens to finally trade cryptocurrencies with margin.

Total Crypto Market Cap Hits 6-Month High At $300 Billion: All Top 30 In Green. Bitcoin and other cryptocurrencies surged in 2020. This has caused the entire market capitalization to increase to as much as $300 billion. This number hasn’t been seen in the past six months. However, Bitcoin’s dominance continues to decline as altcoins are booming.

150% In 3 Months: Is The Recent Tezos (XTZ) Price Surge For Real, Or Is It a Gigantic Staking Bubble? Tezos has been one of the best-performing cryptocurrency over the past three months. It surged by more than 150%. However, it’s essential to take a look at its specifics to understand whether the price surge is substantiated or if Tezos is a gigantic staking bubble.

Trading Bitcoin & Crypto Books Are On Amazon’s Best Sellers List For 2020. As the prices of cryptocurrencies continue to increase, so does the retail interest in them. Almost 20% of the books in Amazon’s “Online Trading & Investing” best sellers section are related to trading Bitcoin and altcoins.

This week we have a chart analysis of Bitcoin, Ethereum, Ripple, Litecoin, and EOS – click here for the full price analysis.