News in the crypto market continues to pop as Bakkt’s futures caught the headlines this week. However, launching the platform failed to affect the price as many expected and it seems to have become a “sell the news” event as Bitcoin continues its downward trend.

Following the SEC lawsuit against KIK raising capital through an ICO, the company fired 70 employees from its subsidiary Kin and CEO Ted Levingston announced that the company would close its messaging service.

An important BITWISE report created for the SEC, analyzed Bitcoin actual and fake trading volume on different exchanges. According to the report, CME’s entry into the market played a significant role in price volatility.

After the recovery that altcoins made and their sharp increases last week, this week we saw a correction of many of them with an attempt to create support. Although some altcoins managed to hold at their support, all eyes are on Bitcoin in an attempt to understand its next move.

To sum up, the trend in Bitcoin has been reversed since the beginning of the year and, naturally, regulators see the trends and continue to work their way for compliance. Meanwhile, the price of Bitcoin lost the support at around $10,000, despite the technological and regulatory infrastructure that is being created. Are we on the path to adoption in a more significant order?

Altcoins Finally Shine as Binance US Situation Gets Settled. It appears that altcoins finally had their moment right after Binance deployed its trading platform for citizens of the US. All of the large- and mid-cap cryptocurrencies saw serious gains against both the USD and Bitcoin. Meanwhile, Bitcoin’s dominance started to drop. 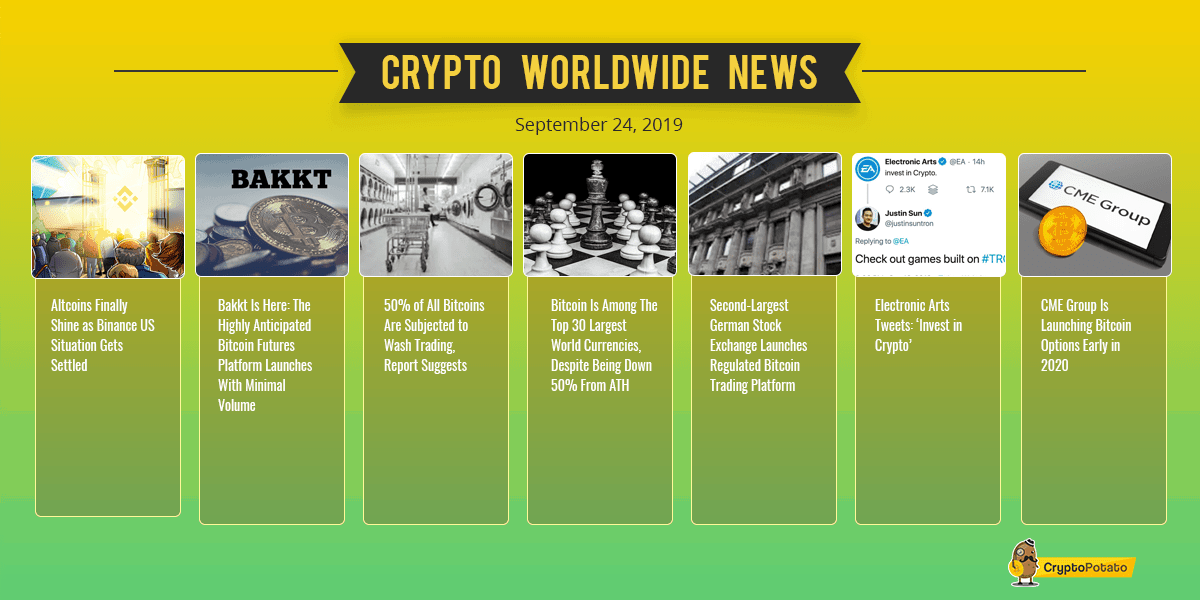 Bakkt Is Here: The Highly Anticipated Bitcoin Futures Platform Launches With Minimal Volume. The long-awaited launch of Bakkt, the Bitcoin futures trading platform took place yesterday, September 23rd. However, the trading volume remained low throughout the entire first day as only 72 contracts were purchased. It’s interesting to see if the volume will increase and if Bakkt would live up to the hype.

Bitcoin Is Among The Top 30 Largest World Currencies, Despite Being Down 50% From ATH. Bitcoin has managed to make its way among the top 30 largest world currencies. More impressively, it did so despite being 50% down from its all-time high value. Given its brief 10-years history, Bitcoin has become a factor that can no longer be ignored easily.

Second-Largest German Stock Exchange Launches Regulated Bitcoin Trading Platform. The second-largest stock exchange in Germany – the one in Stuttgart, has launched a regulated Bitcoin trading platform. At first, the venue will only offer regular market and limit orders but more options are expected to be added soon.

Electronic Arts Tweets: ‘Invest in Crypto’. One of the largest game publishers, Electronic Arts (EA) has recently tweeted “invest in Crypto.” While it appeared as a surprising endorsement for the cryptocurrency field, it turned out to be a promotion for the new season of Apex Legends and a character called “Crypto.”

CME Group Is Launching Bitcoin Options Early in 2020. The CME Group recently announced that it will offer options on its bitcoin futures contracts somewhere in the first quarter of 2020. According to the reports, the move aims to provide more tools for proper hedging and trading to its users.