Crypto Blog
You are here: Home / Crypto Blog / Bitcoin / Bitcoin Stagnates At $8,000 As Altcoins Are Waking Up: Weekly Crypto Market...

We saw a week full of concerns for Bitcoin as it plunged below $8,000. The volatility around this price level and the technical behavior on the charts gave traders room to do their business.

We can see that the fear of a potential return of the bear market also increased this week as the price continues to wane. There are, however, optimists, who think that the correction is healthy for the market. In addition, the saga around Tether and big market manipulations also added up to the tension.

Altcoins are in a mixed trend. There are some of them, like Chainlink which went up around 30% and XRP which gained 7%. At the same time, their decline against Bitcoin halted and some altcoins even show signs of bottoming. In any case, we can conclude that 2019 has so far been rather bad for the altcoin market.

Telegram’s cryptocurrency is also to be launched soon which could bring in fresh money and new hype. Also, the hype around Decentralized Finance (DeFi) is also gaining momentum through the ecosystem as cryptocurrency fundraising is moving towards a new model. However, the question of whether or not this model will succeed or it would be another bubble remains.

October started slow and we are entering the last part of 2019. In the cryptocurrency market, however, this is just enough to get a whole new picture. 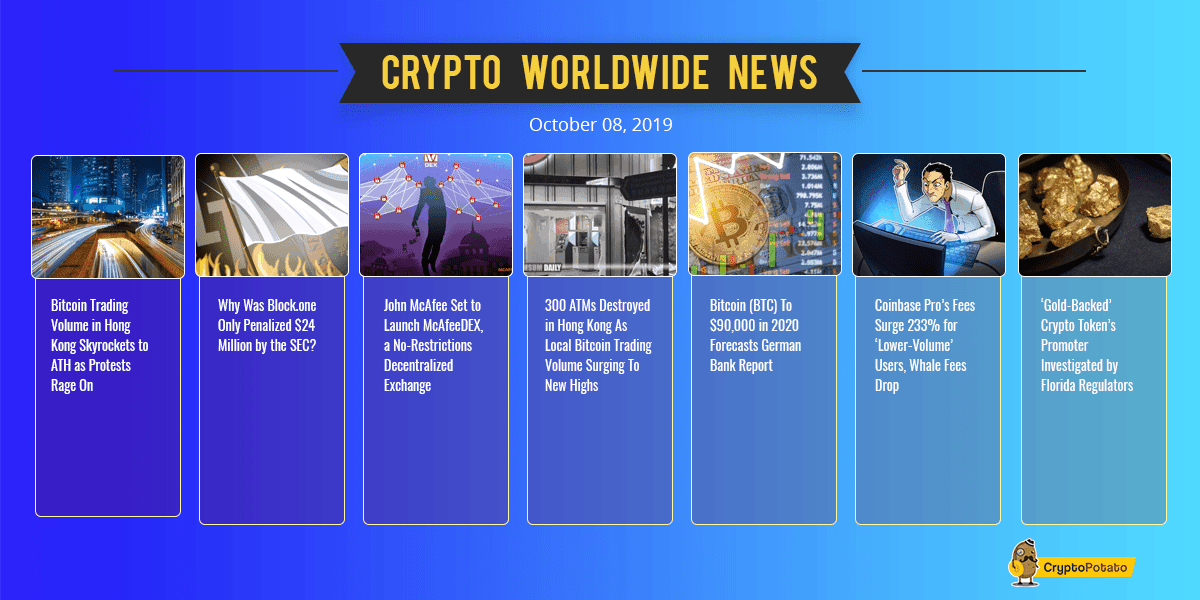 Bitcoin Trading Volume in Hong Kong Skyrockets to ATH as Protests Rage On. The political turmoil in Honk Kong continues to rage despite the recent developments between the protesters and China’s government. Amid these times of economic and social uncertainty, Bitcoin trading volumes on P2P exchang LocalBitcoins has surged to an all-time high.

Why Was Block.one Only Penalized $24 Million by the SEC? The SEC has fined Block.one, the publisher of EOS, with $24 million for violating security offering regulations. An industry expert weighs in on the matter, explaining why the fine was only $24 million, given that EOS raised upwards of $4 billion in its initial coin offering (ICO).

300 ATMs Destroyed in Hong Kong As Local Bitcoin Trading Volume Surging To New Highs. As the protests in Hong Kong keep on going, 300 ATMs have been destroyed. While the officials are working on putting the situation to bed, Bitcoin sees serious increase in its trading volume on peer-to-peer exchange LocalBitcoins in yet another week.

Bitcoin (BTC) To $90,000 in 2020 Forecasts German Bank Report. Bitcoin is hitting $90,000 next year. At least that’s what the seventh-largest financial institution in Germany thinks. Bayern LB published a report on Bitcoin and it predicted this rather serious number accordingly. It uses the popular stock-to-flow ratio and says Bitcoin is a harder form of commodity money than gold.

Coinbase Pro’s Fees Surge 233% for ‘Lower-Volume’ Users, Whale Fees Drop. The leading US-based cryptocurrency exchange Coinbase has announced that it will be increasing the trading fees on Coinbase Pro – its professional platform. Maker trading fees for low-tier trades below $10,000 will increase with as much as 233% according to the most recent updates.

‘Gold-Backed’ Crypto Token’s Promoter Investigated by Florida Regulators. Regulators from Florida are investigating a German company that has been promoting a token that’s tied to a cryptocurrency bank in Miami without any banking license in the state. Prior to entering the crypto space, the company used to sell gold products online.

Paypal Exits Libra – Mastercard and Visa May Follow. PayPal has announced that it won’t go on supporting Facebook’s cryptocurrency and that it leaves the Libra Association. Reportedly, Visa and Mastercard are also uncertain about their connections to the project.

The post Bitcoin Stagnates At $8,000 As Altcoins Are Waking Up: Weekly Crypto Market Update appeared first on CryptoPotato.