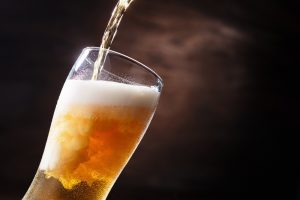 When the history of blockchain technology is written, 2018 will be known as the year it arrived. How do we know that?

This vending machine is cool. If you’ve ever used your phone to pay for something with Apple Pay or Google Pay, it works a little bit like that.

Everything starts with setting up your phone. You have to download the Civic app and set up an account that verifies your age and identity. It’s almost like signing up for a digital driver’s license or ID. Once your account is created, you can use the app to verify your age at the vending machine (or any service that accepts Civic). Then you transfer some bitcoin, and the machine gives you a can of cold beer.

And it’s important that Anheuser-Busch is involved. Its beers – from television commercials to consumption – dominate American culture. And when a major sector or company embraces a new technology, it’s an early indicator that mainstream consumer acceptance is on the way.

Consider the e-commerce landscape in 1989. Yes, there was e-commerce in 1989. The web wasn’t around. But dial-up services like Prodigy, America Online and CompuServe still connected people to the internet.

It was in that environment that American Airlines offered its easySABRE service on Prodigy. The service allowed you to book flights on 300 airlines, make reservations at thousands of hotels and even rent cars. It was ahead of its time. (Yes, I used it. Don’t judge.)

In 1996, with the web still in its infancy, Travelocity and Expedia were launched, making the travel sector the first to truly embrace e-commerce and the internet.

Civic and Anheuser-Busch are charting a similar path. And beer isn’t the only sector where large established players are getting into blockchain.

In finance, Nasdaq is actively using blockchain tech to settle certain transactions. In medicine, Quest Diagnostics has launched a pilot program with UnitedHealth, MultiPlan and Humana to create a data-sharing platform. In shipping and logistics, UPS and Maersk are investing heavily in blockchain to develop systems to track and manage global shipping and supply chains. In fact, they’re so vested in blockchain technology that they testified before Congress last week about its importance.

So as you watch blockchain take off this year and beyond, take time to appreciate that it all started with an ice-cold beer.