It’s an understatement to say the current price of the world’s largest cryptocurrency pales when compared to its past glories – at $6,700, bitcoin is down roughly 60 percent from its all-time high.

That said, market conditions aren’t the same as they have been in years past. Indeed, bitcoin’s 2017 boom has brought new attention, and with it, traders and investors who are left wondering if the asset can ever return to its former glory.

Certainly, there’s no shortage of ways to approach the question, but one effective method is to look at the charts for historical patterns that could speak to investor psychology, and perhaps, yield valuable hints and clues about future performance.

Applying these theories, a market might be expected to “bottom,” or reach a new low, after a speculative bubble bursts in a moment often referred to as “capitulation.” Consisting of extreme selling over a short time period, the infamous 2014 bitcoin bear market finally bottomed out after it lost more than 40 percent of its value in less than three days at the top of 2015.

Since such an event could be measured and understood in…

Here we go again. Bitcoin has hit what chartists call a “support line.”

Here is the chart: 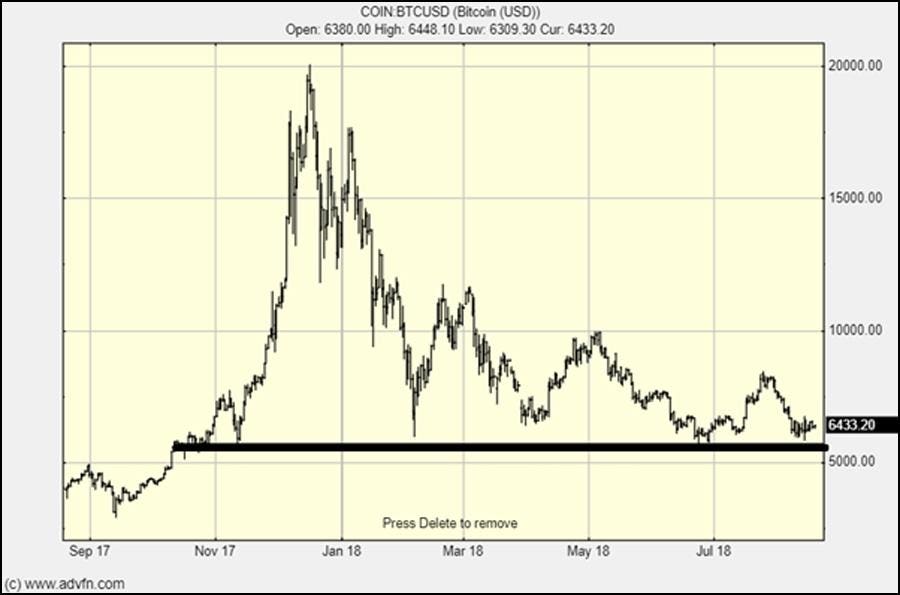 “Support” is meant to be a psychological level created by people watching for bottoms in markets. It is meant to be harder for a financial instrument to break down through a previous bottom, than to bounce up from it, so ‘support’ is a potential rallying point.

[Ed note: Investing in crypto coins or tokens is highly speculative and the market is largely unregulated. Anyone considering it should be prepared to lose their entire investment.]

The idea is that support and its brother indicator “resistance” become self-fulfilling prophesies. People trade when they see support and resistance, and thereby turn these points into…

In the digital currency space, it’s common for many coins and tokens to move in similar patterns. When bitcoin (BTC), the largest cryptocurrency by market cap, goes up, other digital tokens tend to increase in value as well. When BTC declines, it’s likely that other players in the space will drop at the same time.

In recent weeks, as many cryptocurrencies have fallen even further in what has already been a tough year so far, this pattern has held. However, as a report by Zycrypto.com indicates, something interesting has been happening: ethereum and other altcoins have been hit harder than bitcoin, overall. Why is it that altcoins are suffering more significant losses than the top digital currency?

The report indicates that bitcoin has commanded more than 50% of the total cryptocurrency market cap in recent weeks. One important turning point for the crypto space was the announcement that the U.S. Securities and Exchange Commission (SEC) would delay any announcement of a decision regarding the approval of a cryptocurrency exchange-traded fund (ETF) until the end of September. While this announcement, which took place earlier in August, spelled trouble for all digital currencies, it seems to have had a longer-lasting and more significant impact on ethereum and other altcoins.

While investors sold off digital currencies following the SEC announcement, bitcoin was able to hold its value better than other coins. Ethereum dipped to its lowest price in about a year, falling below $300.

Since hitting highs of over $1,400 in mid-January, Ethereum has been locked in a bitter downtrend, punctuated only with relief rallies to meet a series of lower highs. At present, the cryptocurrency is trading under $300—a price not seen since November 2017.

To put this into perspective, the loss represents the removal of just over a hundred billion from Ethereum’s market cap, a value bigger than the GDP of Slovakia, and not far from the entire net worth of Jeff Bezos. In terms of its share of crypto’s total market cap, Ethereum now sits around 14%—a long way from its high of 32% in June last year, when it was fast closing in on Bitcoin, which at the time held 38% (since then Bitcoin has recovered to 54%).

But is it fundamentals or technicals driving this downturn? Does the drop in price reflect a fundamental flaw, or is Ethereum just caught on the wrong side of yet another tumultuous market cycle?

Ethereum’s path to decentralisation remains impeded by unanswered questions, and critics of the cryptocurrency are not lacking in ammunition—pointing to unresolved issues around scaling, concerns over insecure smart contracts, and burgeoning competition as more and more organisations choose to build their own blockchains.

Perhaps the most glaring evidence of weakness has come from…

Bitcoin and cryptocurrency adoption rates around the world are growing, but not quickly enough to prevent the bitcoin price from falling — and now the chief executive of San Francisco-based Coinbase, one of the world’s largest cryptocurrency exchanges, has warned that widespread, mass bitcoin adoption for payments is going to be a long time coming.

The bitcoin price is currently just over $6,000 after falling below the psychological barrier yesterday for the second time this year. The bitcoin price is down some 70% from its highs at the end of last year and many of newer cryptocurrencies that have been created in the last few years have been all but wiped out.

“I think it will be quite some time before you cross the street to Starbucks in the U.S. and pay with crypto,” Coinbase’s Brian Armstrong warned in an interview with Bloomberg at the Bloomberg Players Technology Summit in San Francisco.

Starbucks was recently forced to row back from reports it is working with Microsoft and New York Stock Exchange owner Intercontinental Exchange on a new digital platform that will allow its customers to use bitcoin and other cryptocurrencies at its outlets.

“Customers will not be able to pay for Frappuccinos with bitcoin,” a Starbucks spokesperson said after it was announced the coffee chain was involved with a new cryptocurrency venture called Bakkt.

Armstrong estimated that only about…

The price charts resemble battlefields, with red arrows raining down relentlessly. Since the start of the year, the price of bitcoin has fallen by more than 50%, cutting more than $100 billion from its market capitalization. At the time of writing, Satoshi’s digital gold trades for around $6,400 per coin, a far cry from the $100,000 that some analysts predicted at the beginning of the year.

And it’s not just bitcoin.

For instance, since recording an all-time high of more than $1,400 in January 2018, ether has similarly plunged. In the past month alone, ether has shed nearly $11 billion in market cap (that’s equivalent to 55,000 Lamborghini Huracáns). Ripple’s XRP, which once hovered near $4 per unit, has also succumbed to gravity, crashing some 90% from its January peak.

It’s hard to pinpoint a single reason for the declines, and some coins are already bouncing back from the depths plunged earlier this week. Here are a few of the factors market watchers believe may be contributing to the crypto carnage…

Bitcoin touched below $6,000 and dozens of smaller digital tokens including Ether retreated as this month’s sell-off in cryptocurrencies showed few signs of letting up.

The largest digital currency fell as much as 6.2 percent to $5,887, the lowest level since June, before paring some of the drop, according to Bloomberg composite pricing. Ether sank as much as 13 percent, while all but one of the 100 biggest cryptocurrencies tracked by Coinmarketcap.com recorded declines over the past 24 hours.

The total market capitalization of virtual currencies dropped to $193 billion. That’s down from a peak of about $835 billion in January.

“Most cryptocurrencies have been overvalued for a very long time,” said Samson Mow, chief strategy officer at blockchain developer Blockstream Corp. “It’s hard to pin this move on any particular factor, but it feels like the opposite of last year when money piled in as people felt FOMO. Now it’s piling out as they sense…

A sell-off sent the ethereum price plunging below $300 on Monday, forcing the second-largest cryptocurrency to its lowest mark in more than nine months.

Ethereum had traded as high as $323 earlier in the day, but a flurry of sell orders began to pummel the market at approximately 15:00 UTC, driving ETH closer and closer to $300, a level it had not touched since 2017.

Renaissance Macro Research’s head of technical research Jeff deGraaf concluded it may be “game over” for Bitcoin (BTC) in a new analysis, CNBC reports August 9.

In a note to clients, deGraaf, who has received multiple accolades for his trading insights in the past twenty years, claimed Bitcoin’s price movements suggest the largest cryptocurrency is “permanently impaired.”

CNBC quotes deGraaf as writing that Bitcoin’s “parabolic moves are notoriously dangerous for short-sellers,” adding that a top normally develops with the appearance of a “descending triangle over months, with reduced volatility and little [fanfare],”

“Once the top is complete on the support violation, the security in question can often be considered permanently impaired or even ‘game‐over’. We are of course referencing Bitcoin as exhibit ‘A’ in today’s market.”

Bitcoin captured the attention of investors, celebrities and even NFL playersin 2017, as its price soared from below $1,000 for a single coin at the start of the year to over $19,000 in December.

The digital currency underpinned by blockchain technology — a decentralized ledger managed by a network of computers through complex math problems — has since fallen to trade near $6,430 at 10:00 a.m. EST Thursday morning according to Coindesk. For long term holders of bitcoin, that price is still a huge gain; a single coin was worth less than $100 in 2013.

However, it’s important to remember that its value can fall all the way back to zero. In fact, there is a 0.4 percent chance bitcoin will become worthless, according to a new report by two Yale University economists.

“The current implied daily disaster probability is about 0.4 percent for Bitcoin, 0.6 percent for Ripple, and 0.3 percent for Ethereum,” according to the report by Yale University economics professor Aleh Tsyvinski and economics Ph.D. candidate Yukun Liu.

By studying the price data for bitcoin from 2011 to 2018, along with that of Ripple’s XRP and Ethereum’s ether from the newer currencies’ inceptions in 2012 and 2015 respectively, Tsyvinski and Liu were able to calculate the probability that the price of a cryptocurrency would…