Crypto Blog
You are here: Home / Crypto Blog / Bitcoin / Copy the rich, become rich: 5 ways to do it

Rich people are doing something right: If nothing else, they’re good at making (or, at least, having) money.

That’s why when it comes to money, it’s worth taking a look at what rich people do…

Here are five rich-people traits that are worth acquiring…

The idea behind diversification is simple. It means putting your eggs in different baskets. That is, spreading your risk across different types of assets, so that a decline in value in any one holding isn’t so bad – because there will likely be other holdings that rise to help balance out the losses.

But diversification goes beyond just holding a number of different assets… what about your “personal equity”? Is it diversified?

Equity is what’s left after you add up the value of everything you own, like stocks and stamp collections and your flat. Then you subtract what you owe (on your mortgage or to the taxman or your ex-spouse, for example). What’s left is your net worth, or your equity.

So when I say “personal equity”, I’m talking about a much more broad definition of your assets – financial and personal and professional experience and prospects and earnings power… personal equity is about how you’re going to build your equity in the future.

It’s about where you’ll be earning your living – adding to your savings – in coming years. Where is your paycheck coming from? What other sources of income do you have? Where is your professional network – and how strong is it? How transferable are your skills? How many languages do you speak – and how easily could you work in a different country?

Most people work in the same country where they have almost all of their assets. And even if you do hold some foreign shares or own real estate in another country… when you factor in where and how you’ll be earning money in the future, you’re probably a lot less diversified than you think.

So if the banking sector goes bust… their home currency massively devalues… the real estate market crashes… or the government starts searching for ways to plug a massive budget deficit, their assets are safe. They’re flexible, financially, professionally and personally.

2. They learn from others

If you want to be a successful at anything, the first step is learning from other successful people. This is true whether you want to learn to fix a car, make chocolate chip brownies, or burp a baby. It’s also true when it comes to investing.

Rich people take a look at what other successful people have said and done… how they’ve overcome struggles… the mistakes they’ve made… and the wisdom they’ve gained. Understanding how others have succeeded can dramatically shorten your learning curve.

Experience is a great teacher. But as an investor, learning the hard way can turn out to be a very expensive lesson. (I’ve certainly done my fair share of learning, as I wrote here, when I lost US$50 million of other people’s money.)

So instead of learning from your own mistakes, look to generally successful investors who’ve succeded, and how have made some mistakes along the way, and learn from them.

3. They find their own way

People tend to follow the herd. It’s human nature to think that if the majority is doing something, then it must be the right thing to do.

This crowd, or mob, mentality is one of the reasons that market bubbles form. Everyone gets excited about a stock or an industry, the media starts talking about it and prices skyrocket. You don’t want to miss out, so you jump on the bandwagon just as prices are peaking… and you end up losing big.

It can work the other way, too. When a market starts to fall, the crowd sells everything because it’s worried about heavy losses. You panic and follow suit, solidifying your loss.

So just because everyone else is doing it doesn’t mean it’s the right thing to do. Rich people know this and they find their own way.

But some investors interpret any bad news, or market correction, or stock decline, or literal blood on the streets, as good news in disguise.

That kind of attitude – knee-jerk contrarianism – is a great way to lose a lot of money, because sometimes – and maybe even most of the time – the boring, plain, they’re-all-saying-it conventional wisdom is, in fact, correct. 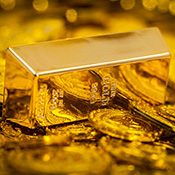 Did you know you can buy gold in a “cash-flow-able” form?

That’s right, instead just buying physical bricks and just waiting for gold to go up… you can generate a passive income of 12% to 26.4% per year with GOLD & SILVER.

What’s more? This strategy is so simple you can do it from a bar on your cell phone.

Find out how in this complimentary training webinar (100 spots only)…

4. They pay attention to what they pay

A fantastic asset that is expensive may be a lousy investment. And a lousy asset – beaten up, poorly managed, a terrible history – may be a fantastic investment.

Rich people know that the price they pay, more than anything else, will determine whether or not they wind up making, or losing, money. And they know that a high quality asset doesn’t always generate to high returns… and that a lousy asset that’s on the right track to improvement might be a much better, if riskier, investment.

And price matters. Study upon study has shown that cheap beats expensive when it comes to profiting from markets. In the stock market, one of the best ways of measuring value is to use the cyclically-adjusted price-to-earnings (or CAPE) ratio, which smooths out short-term price fluctuations.

Investing in markets that have a low CAPE, on average, results in much better returns than buying stock markets with high CAPEs. Of course, this is the same for stocks… all else being equal, your odds of making money improve when you buy a stock that’s cheap, rather than a stock that’s expensive.

In the short term, anything can happen to the price of an asset. More people rushing in to buy an already-expensive “hot” stock will push the price up higher. And negative sentiment towards an out-of-favour market or stock can mean that it takes a while for a cheap asset to rise in price. But in the end, price will prevail.

5. They use the power of compounding

Compounding is the most powerful force in finance. Albert Einstein is said to have called it “the greatest mathematical discovery of all time”. And it’s probably helped more people build wealth than all the other investment strategies in the world put together.

Compounding is a simple idea… in short, it means reinvesting returns instead of spending them. Over time, the original investment gets bigger and bigger as more returns are reinvested.

It’s like a snowball rolling down a hill. The further it rolls… the bigger it gets.

Just like a snowball, the investment is getting bigger every year. And I’m earning interest on top of interest.

In the short term, that doesn’t sound like a lot. But now look at the magic of compounding over several decades… and the more decades, the better.

If I started investing when I was 25 years old with an annual investment of $20,000 (and I reinvested the interest each time) at 65, I’d be sitting on a nest egg of about $2.5 million.

But if instead I’d started investing the same sum each year, on the same terms, at 35 (rather than 25), I’d have about $1.1 million less when I retired – because compounding has had less time to work its magic, as the graph below shows. That’s a huge difference.

So when it comes to compounding… time is the secret to success. Starting as soon as possible and reinvesting interest over several decades can build life-changing wealth.

Individually, none of these traits will make you rich. But if you combine them, they can help you become a successful investor – and wealthier.

The post Copy the rich, become rich: 5 ways to do it appeared first on Stansberry Churchouse.

What happens when the next recession hits? Here’s where China’s headed over the next five years
Scroll to top