People from every walk of life are interested in investing in the cryptocurrencies. Before the recent hype, it was only young people who understood the technology that wanted to invest in cryptocurrencies. But now, all kinds of people want to invest their life savings in crypto exchanges.

Many are fueled by the mistrust of government institutions. Most of the investors from Brazil are in the 30-40 age bracket. These people lost their savings during the economic plans of the 1980s and 1990s, which were launched by the Brazilian government in the face of hyperinflation.

There are currently only 3 main cryptocurrency exchanges in Brazil, these exchanges deal with almost 90% of the bitcoin transactions that are carried out in Brazil. On average, around 500 bitcoins are being traded on the Brazilian exchanges every day. This amount is equal to around 75 million USD.

The largest Brazilian exchange, Foxbit, has more than a million users. However, the exchange has been known for its degraded service and last year, it lost almost 30 Bitcoin or $270,000 at that time, due to a bug. The exchange also shut down its operations at the start of 2018, when it was unable to handle the traffic due to Bitcoin’s high price.

Considering these incidents, it is evident that the exchanges that are providing services to Brazilians are unreliable. These old exchanges are unable to cope with the increasing demands of their users and do not provide them with the latest functionalities.

Keeping this in mind, Ramon Vailatti came up with CriptoHub, which he envisions, will resolve the issues that are faced by Brazilian investors when dealing with the old exchanges. The exchange is currently in the development stages, and its ICO is planned for May.

Unlike the existing crypto exchanges, CriptoHub vows to provide quality service to its customers. The team clarifies that the exchange is being built with only one thing in mind, and that is quality. The team behind CriptoHub is experienced in developing great products that users can enjoy using.

To get the initial traction and attract users to their new platform, CriptoHub will be using a number of strategies:

First of all, CriptoHub has their own SEO specialist, who deals with large-scale digital campaigns. The platform wants to get out there and let people know that there is a new exchange in Brazil, which offers quality service while providing all the functionality an investor expects from an exchange.

Secondly, CriptoHub has an intuitive indicator program, which rewards investors for bringing in more investors. Whenever a user is indicated of bringing in another user onto the platform, he will be rewarded with the exchange’s native tokens. This will create instantaneous marketing for the exchange and will support the virtual community of bloggers, who can refer users and earn financial rewards in return.

The performance marketing approach of CriptoHub means that the exchange is expecting to attract a large number of users in a relatively short time. The exchange will use different SEO tactics to attract investors to use their exchange.

The exchange itself is being developed by a team of experienced web-developers. The team is developing an exciting exchange with tons of features. The exchange will have a web presence as well as an application, allowing users to access the exchange easily from whatever device they want.

Although there are more than 1,300 digital assets in the world, the current exchanges in Brazil only offer around 11 crypto assets to their users. CriptoHub says that it is committed to offering its users an increased number of pairs. This will allow greater diversification of investments and provide investors with more opportunities to make profits.

In the future, Criptohub is planning on launching a pre-paid debit card for its users. The debit card will allow users to easily buy physical items with the help of their exchange balance. This will allow users to use their crypto earnings for payment in the usual commercial establishments, within Brazil. For high worth investors, CriptoHub will provide special care and help them in trading and making the right decisions related to their investments

Currently, the exchange is in the development stage and will launch 30 days after the ICO,. The investors will be able to trade their tokens after the 30-day lock period. The Exchange will begin its operation in June 2018, and the debit card is expected to launch in April 2019. 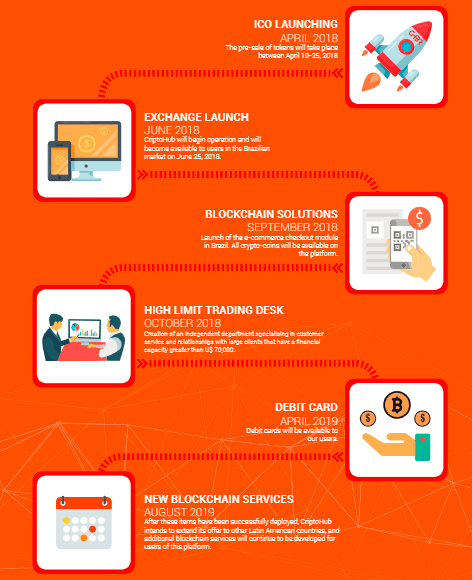 The exchange will be powered by an ERC-20 based digital token, which will be known as CriptoHub Coin (CHBR). By using the ERC-20 technology, the exchange provides additional security and features to its users. The token holders will be given exclusive discounts on brokerage fees and other services.

The role of the token on the platform is to allow investors to obtain discounts on trading fees. The tokens will also be used for the development of the exchange. CriptoHub has already made a token distribution, which explains where the tokens will be used.

The following figure explains it: 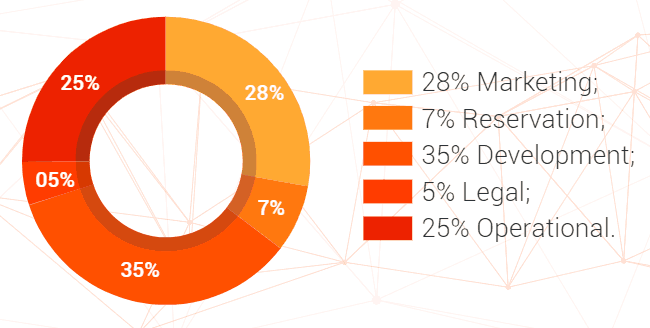 The following are the main team members of CriptoHub.

He is the CEO of CriptoHub, and the exchange is his brainchild. He has prior experience of building two companies and more than 10 years of web experience.

He is the CMO and is responsible for ensuring the marketing of the platform. His main duty is to fulfill CriptoHub’s vision of expanding its userbase through aggressive marketing.

She is the CFO and the administrator and financial manager of the whole project.

The following are the main advisors for the CriptoHub.

He is a Certified Bitcoin Professional (CBP) and has more than 30 years of experience in business and technology.

He will be advising CriptoHub in the capacity of legal advisor and is an experienced lawyer, based in Brazil.

Following are the main details of the tokens being issued by the CriptoHub in its pre-sale and public sale.

Payment Methods: Ethereum and other cryptocurrencies

The unsold tokens will be destroyed after the public sale.

Houbi Marks US as Its Next Target, a Special Interview

China’s CCIEE Chair: We Will Be The First To Launch Central Bank Digital Currency

Ripple Price Analysis Feb.6: The Bearish H&S Is Still Alive – Might Turn Into a Disaster for XRP