Crypto Blog
You are here: Home / Crypto Blog / Bitcoin / Crypto Is a Work in Progress, Not a Finished Product 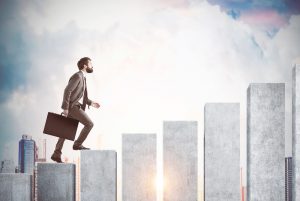 Humility isn’t a quality you often associate with Las Vegas.

Yet there I was in Las Vegas earlier this week, attending a fintech conference filled with humility.

Bankers. Venture capitalists. Crypto executives. Andreessen Horowitz. Coinbase. Litecoin. American Express. HSBC. One by one, they all came to the stage and uttered some variation of this:

Crypto/blockchain is still in the dial-up stage.

The dial-up stage refers to the early stages of the internet, where people used painfully slow modems and phone lines to connect to go online. Back then, downloading a picture in less than 10 minutes was a major accomplishment.

The dial-up analogy was offered with much chagrin. These people – the leading lights and advocates of crypto – seemed embarrassed by the way crypto markets surged in 2017. Crypto wasn’t ready for prime time. And they knew it.

Crypto in 2018, they argued, is just like the early stages of the internet. There are problems with speed, usability and scalability. And these are the same types of problems the internet faced in its early days.

How do I know? I was there during the internet’s dial-up days. In fact, I was more than just there. I was one of the internet’s true believers. It was my job to create online news content and business models for an audience that was just learning how to use email.

It was my job to convince publishers, advertisers AND consumers that the internet had a future.

Think about that for a minute. My job was to convince people the internet had a future.

More than 20 years later, it seems laughable. But back then, it was a serious debate.

And most people didn’t believe me.

The online experience was terrible. It was slow. It was clunky. It wasn’t user-friendly.

“Why would anyone read a newspaper on a screen?” people would ask. “The newspaper is perfect. It’s portable. And it’s easy to read.”

Newspaper publishers and reporters were even more pointed.

Several editors yelled at me for publishing breaking news. Apparently, I was supposed to wait 24 hours so the newspaper could publish the news first.

I routinely ignored that rule.

Looking back, it seems ludicrous. But this was life in the ’90s. And still, many in the news business can’t believe what’s happened. They now write and report for the web. And newspapers are shrinking – or disappearing.

Crypto is in the exact same spot the internet was 23 years ago – struggling to overcome its limitations to gain mainstream adoption.

Critics treat crypto like it’s a finished product instead of an evolving product. It’s the same mistake internet critics made. People were so busy defending the status quo they couldn’t see the internet’s potential. They saw only the flaws.

And much like we did in the dial-up days of the internet, we’re just beginning to explore all the different things crypto can do.

We don’t know yet which coins or projects will emerge from these early days as the dominant players. In the early days of the internet, people thought AOL, Netscape and Microsoft (remember the browser wars?) would be the big winners. Oops.

But we do know that the people who focus on creating quick, efficient, user-friendly experiences will ultimately win the day. That’s what happened for internet companies. That’s what will happen for crypto.

The post Crypto Is a Work in Progress, Not a Finished Product appeared first on Early Investing.

Startups Are Ready for Private Equity Crowdfunding
News Fix: The Fed – and the Feds – Are Confused
News Fix: The Two-Minute Drill Version
Institutional Crypto Addresses, Bitcoin Holdings Have Increased Despite the Bear Market
Stay on Top of Your Invited Deals
Mailbag: Why Wisdom of Crowd Beats Analyst Expectations
The Power of the Private Market
Cannabis Moms Strike Back

The Daily: September Losses for Most Traders, Crypto Debit Cards Shipped in... 10 Years On: Five Things Needed for the Mass Adoption of Bitcoin
Scroll to top