Crypto Blog
You are here: Home / Crypto Blog / Bitcoin / Crypto Market Update Dec.4: Ready for the next episode after a calm we...

It’s been a quiet week for the market after the price drop of recent weeks, the downward trend has stopped, and the entire market is ready to see what happens next. It seems that weak hands are real and money is changing hands as new players enter, and the order book is renewed. In addition, mining difficulty fell by 15%, the sharpest decline since 2011.

The alternative coins, Altcoins, had a slightly more turbulent week with a mixed trend, with many of the altcoins showing a positive trend, especially when trading against Bitcoin.

Ethereum Classic’s development team announced that they are abandoning the development due to difficulties in financing their operations. It will be interesting to see how long ETC will continue to star in the top 20 even though its developers have abandoned ship.

A 51% attack on Vertcoin reminds us of the weakness of small and unsafe Alt networks.

The ICO phenomenon continues to lose momentum, and despite the SEC’s warnings, many companies are trying their luck in the airdrops scene.

The market cap is around $128 billion, and the trading volume is stable at $14 billion 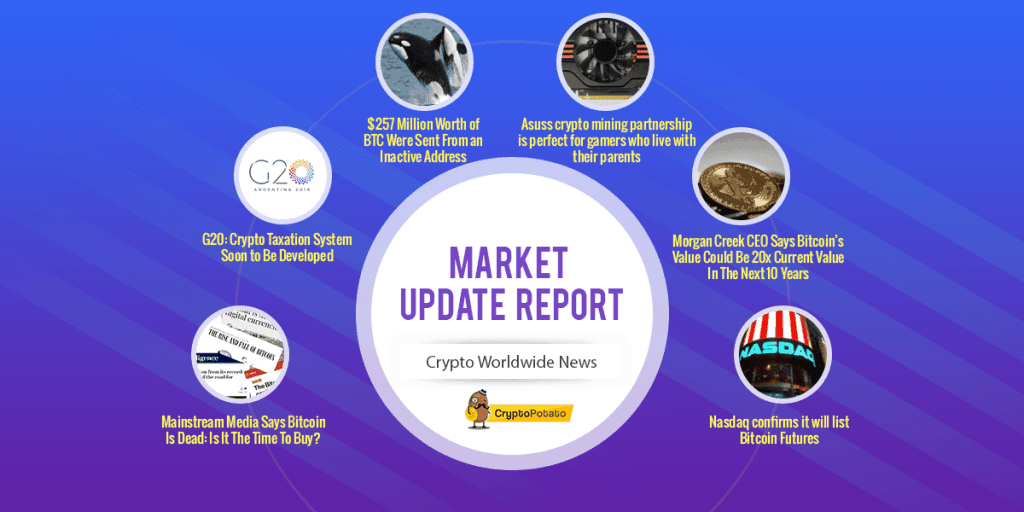 Mainstream Media Says Bitcoin Is Dead: Is It The Time To Buy? The media have incorrectly described Bitcoin’s recent plunge as a “dead” end for the cryptocurrency. However, it is not what it seems, and this may just be the best opportunity to buy low.

G20: Crypto Taxation System to Be Developed Soon. G20 member nations plan to release a system that makes it easier for cryptocurrencies to be aligned with the global tax system.

$257 Million Worth of BTC Were Sent From an Inactive Address. One of the top twenty wealthiest Bitcoin address moved 66,233 BTC ($257 million) for a transaction fee of less than $50 after being inactive since 2014. Who owns the wallet?

Morgan Creek CEO Says Bitcoin’s Value Could Be 20x Current Value In The Next 10 Years. In an interview on CNBC’s Fast Money, Mark Yusko said the current state of the market makes Bitcoin a good investment choice for both the long-term and short-term. A 20x increase in the next ten years is attainable, according to him.

Nasdaq confirms it will list Bitcoin Futures. Previously, it was a rumor, but Vice President of Nasdaq’s media team, Joseph Christinat has confirmed that Bitcoin Futures will launch on the world’s second largest exchange in the first half of 2019.

The weekly charts had moved here.

The post Crypto Market Update Dec.4: Ready for the next episode after a calm week appeared first on CryptoPotato.

Atomicpay Launches Private Beta of Digital Currency Payment Gateway What Is SALT Lending? | A Guide to the Blockchain Loan Platform
Scroll to top