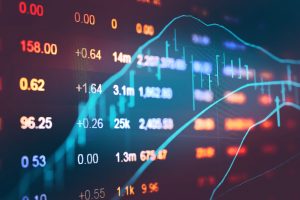 Jeremy Grantham is a bit of a legend in the investment world. He famously called both the 2000 and 2008 bubbles, and his firm, GMO, manages around $74 billion in assets.

Grantham is known for his historically accurate calls on future stock market returns. In 2017, The Wall Street Journal wrote, “Mr. Grantham has already cemented his legend by arguing that U.S. stocks were overvalued in 2000 and again in 2007, anticipating the market’s two most recent crashes.”

Today Grantham says U.S. markets are poised to return 2% to 3% per year for the next 20 years. He believes this is the case because American stocks are overvalued today and growth looks to be sluggish.

I agree. As a whole, U.S. stocks are definitely richly valued. The 10-year average price-to-earnings (P/E) ratio on U.S. stocks, known as the “Shiller P/E” or “CAPE ratio,” now stands at 29. I watch this metric closely because I believe looking at 10 years of P/E provides a more thorough picture of valuations than a one-year snapshot does. 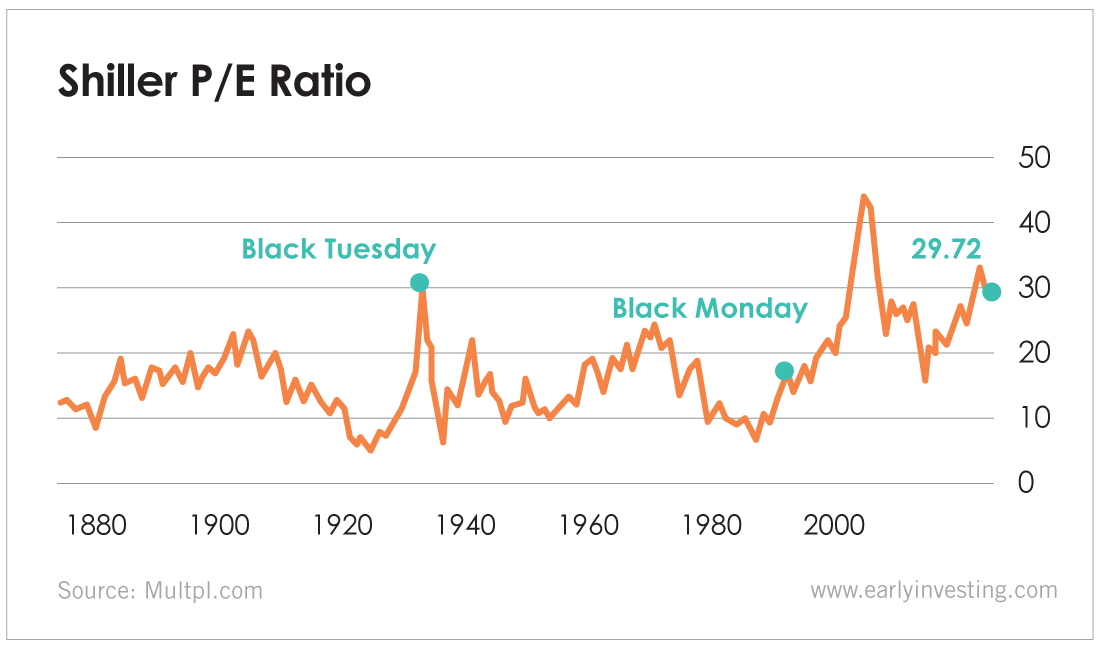 As you can see, the Shiller P/E tends to peak along with stock markets. Today we’re at pretty darn high levels.

Stock buybacks are also at record highs, with more than $1 trillion in new buyback programs announced in 2018. This is another indicator that we’re near a top. 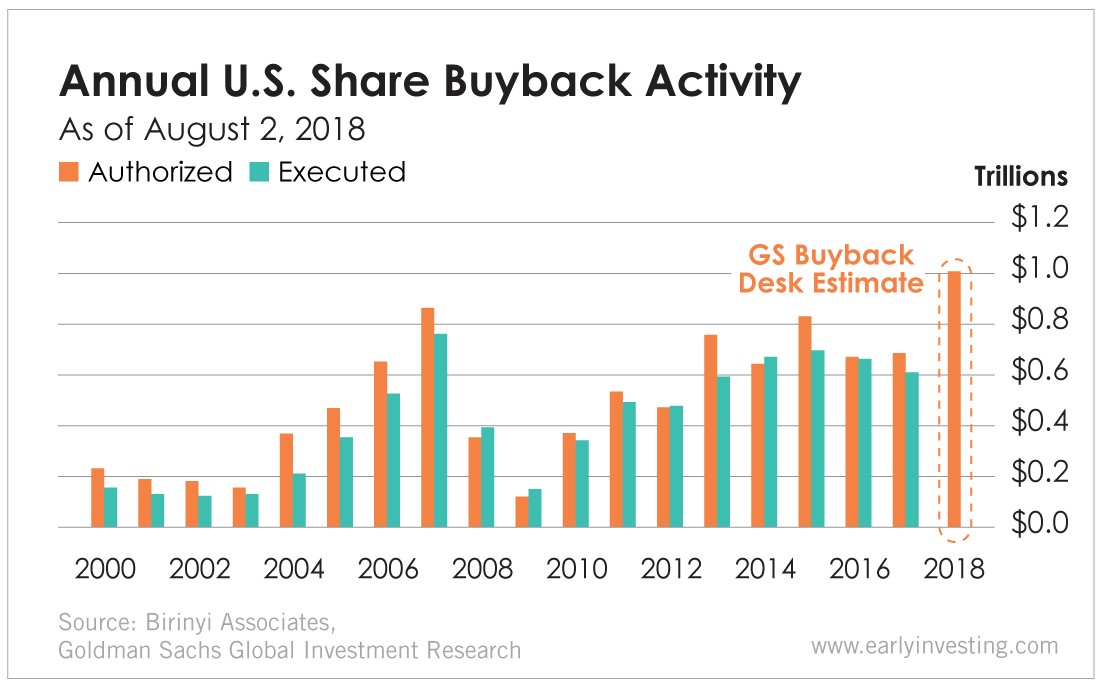 Grantham believes emerging markets (EMs) are the place to be and says EM stocks are “one asset that is reasonably priced in a generally very high-priced world.” Grantham specifically mentions China as a place where you could get 6% to 8% average returns going forward. 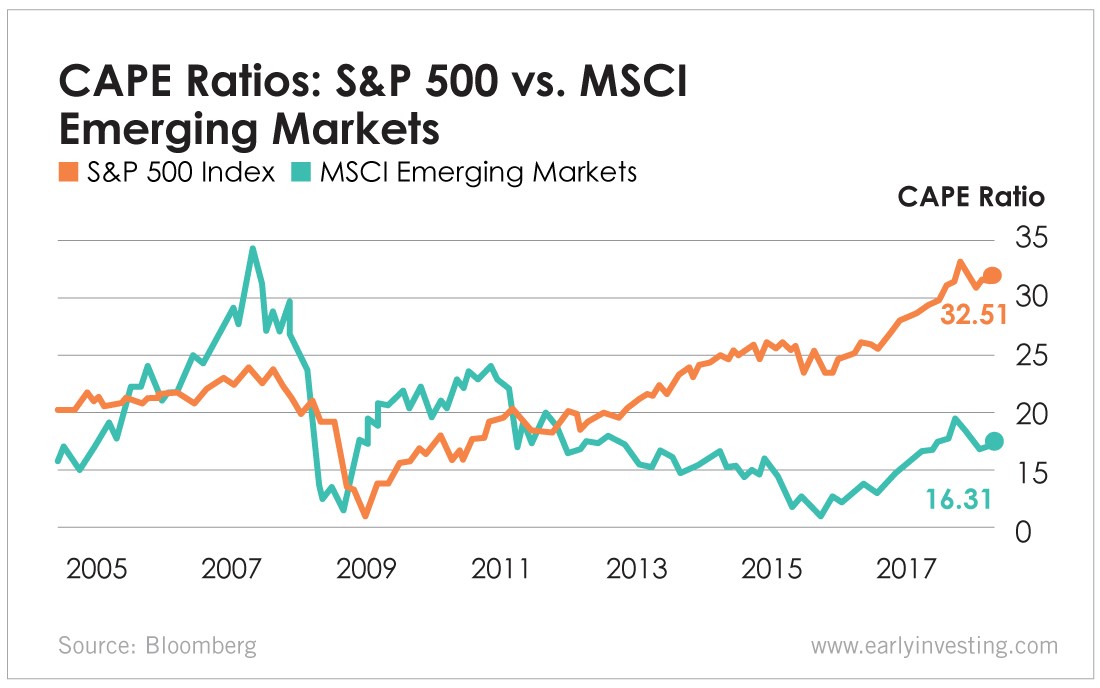 Grantham is putting his money where his mouth is, keeping 55% of his family’s funds in EMs. GMO’s largest fund has “only” 27% exposure to EMs because Grantham says he is limited by “what a substantial majority of investment people think is normal behavior.” It’s strange how most investors believe there’s far more risk in emerging markets than in the U.S. market. I see plenty of risk everywhere. But when one looks at valuations, EMs are a screaming buy.

Grantham’s contrarian views have led to lackluster returns for the firm over the past year and a half. These disappointing returns have caused GMO’s assets under management to drop from $124 billion to $74 billion, according to Institutional Investor.

Still, I’m with Grantham on this one. EMs are a good place to be.

Vanguard, one of the largest fund managers in the world with more than $3 trillion in assets, is also predicting 2% to 4% real growth in U.S. stocks per year over the next decade (factoring in 2% inflation). Vanguard says international stocks should return 5.5% to 7.5% per year.

The U.S. has been dominating international stocks for the last decade. U.S. stocks have outperformed by about 70% since 2009!

But does anyone believe it’s a coincidence that this period of outperformance happened during the lowest interest rate period of our history?

Clearly the Fed goosed stocks higher with these low rates. Now it wants the party to continue and is likely to cut rates down to zero or near to it (eventually I think it’ll go negative). But how long can the stock rally continue? Will the economy thrive with low rates and no return for savers? I have my doubts, so I’m limiting my exposure to U.S. stocks.

What if Grantham is right and U.S. stocks do return an average of 2% to 3% per year for the next decade or more? What if the same low-interest-rate, high-debt problems plague Europe as well? What if stagflation (recession plus inflation) hits?

It’s a scary thought, but it’s a risk we have to consider.

Most American investors have 90% of their portfolios in U.S. stocks. I’d guess their average exposure to EMs is under 5%. And everybody’s still running the traditional investment playbook because it’s been working incredibly well. But I believe the time has come to throw out the traditional playbook.

The S&P 500 is not the place to be for the next 10 years. U.S. stock markets have had an incredible run, but I believe it’s time to start thinking about alternatives like EMs, disruptive startups, cannabis, crypto, and gold and silver. Precious metals should also be a part of every investor’s portfolio, and they’re a bargain at today’s prices, in my book.

It’s been an amazing run, and it may continue for a while longer. The combination of record stock buybacks, low interest rates and loads of new debt is a force to be reckoned with.

But let’s be honest with ourselves and recognize that a large debt-fueled bubble is forming. And it will eventually pop.

The post Emerging Markets vs. U.S. Markets – Which to Buy? appeared first on Early Investing.

This Week in Cryptocurrency: June 14th, 2019 New SLP Token Allows You to Transact in BTC But With BCH Fees
Scroll to top