Crypto Blog
You are here: Home / Crypto Blog / Featured / Ethereum Is About to “Moonshot” After Surging Past This Key Level

Ethereum (ETH) may be on the cusp of seeing a massive parabolic rally, with the crypto’s recent bullishness laying the groundwork for what could be a violent upwards movement.

The firm uptrend that ETH has been caught within throughout 2020 has allowed it to slowly grind up towards the $200 level – a price region that has not been seen since September of last year.

Analysts are now widely noting that ETH’s decisive break above $200 could lead to a “moonshot” rally, with a recently formed technical formation also suggesting that ETH could be on the cusp of seeing parabolic returns.

Ethereum Smashes Through $200 as Analysts Eye a “Moonshot” Rally

At the time of writing, Ethereum is trading up just under 10% at its current price of $204.81, which marks a massive climb from daily lows of $188 that were set just prior to the momentum that was incurred earlier this morning.

This bull-favoring momentum has come about in tandem with Bitcoin’s climb to highs of $9,800, which appears to be a near-term resistance region for the cryptocurrency.

It is important to note that $200 was previously a critical resistance region for Ethereum, and its decisive break above this level seems to suggest that its 2020 rally is about to turn parabolic.

Crypto Rand – a highly respected cryptocurrency analyst on Twitter – explained in a recent tweet that investors should expect a “moonshot” if ETH decisively breaks through $200.

“If ETH breaks $200 expect a moonshot,” he said while pointing to the chart seen below.

If $ETH breaks $200 expect a moonshot 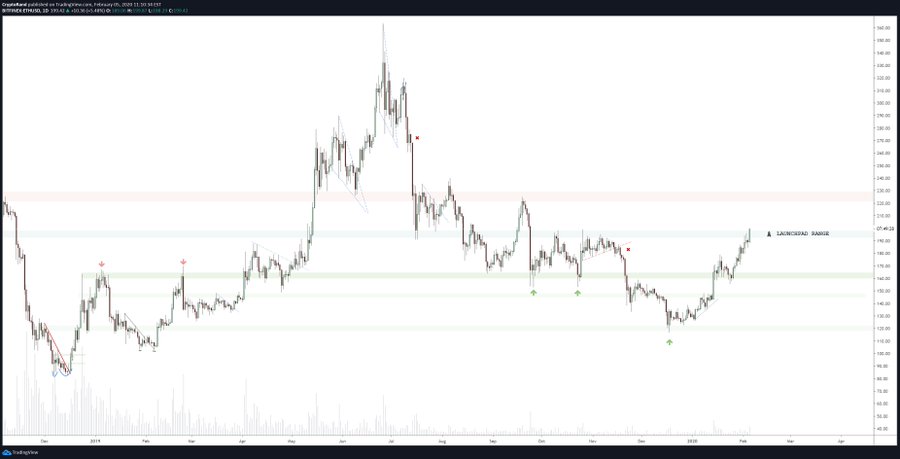 55 people are talking about this

While looking at this chart, it does seem as though Ethereum’s next resistance region exists around $230.

Galaxy, another prominent cryptocurrency analyst on Twitter, explained in a recent tweet that Ethereum’s recent price action resembles bottoms seen prior to previous parabolic rallies, and that this next movement could send it above a multi-year descending trendline.

“If ETH breaks the green line it’s showtime,” he said while pointing to the aforementioned technical patterns seen on the below chart. 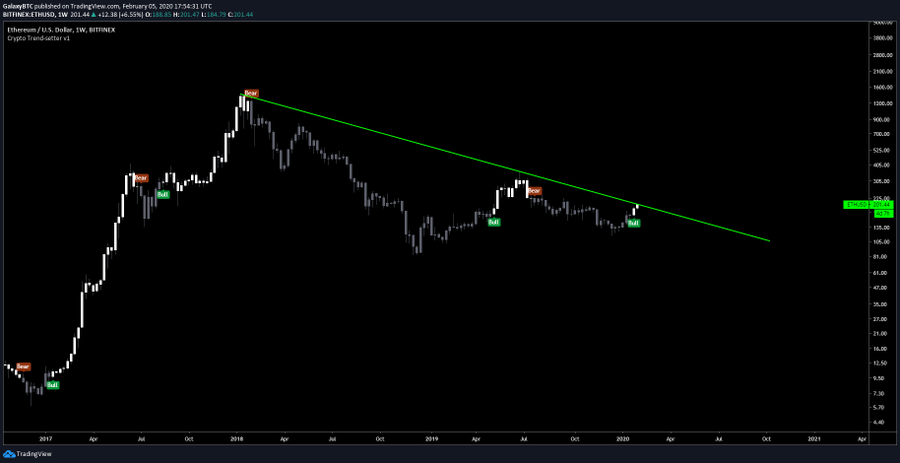 111 people are talking about this

While considering the confluence of all these bullish factors, it does appear to be