As we predicted in our last ETH price analysis, the bulls pushed the price higher and managed to breach above the resistance level of the previous two week’s ‘trading channel.’

These are some positive midterm news for ETH: As long as the price manages to hold up these levels, the overall direction looks positive. We first would like to see the $205 resistance level turns into being a support level.

Looking at the 4-hours chart

– As can be seen on the following chart, ETH price (As of now – $207.2) is being supported at the moment by the $206-$205 price levels. Those price levels had served as a significant resistance before, and now they turn into support levels. Let’s see if this can hold.

– The 200 EMA is also performing as a support level (the white line).

– The ETH chart climbed above the daily downward trend line (taken from the daily chart) and is currently trading on top of it (blue dotted line).

– The RSI indicator has climbed up to 84, in the overbought regions, and is currently getting support at the 57 level. We will look to see if the RSI can hold above the 50th range at the upper half of the RSI channel.

– On the other hand, if the bears manage to pull price back below the $205 price levels and back into the previous famous channel, then the $192 support level could turn into being the next price target.

At the moment, bears and bulls are fighting over the 200 EMA support level, and we have two more hours until the 4-hours candle closes. Bulls would like to see it closes above the 200EME (the white line).

Looking at the 2-hours-chart, we notice a Golden crossover, which is 55 EMA crosses over the 200EMA, which is a bullish signal. 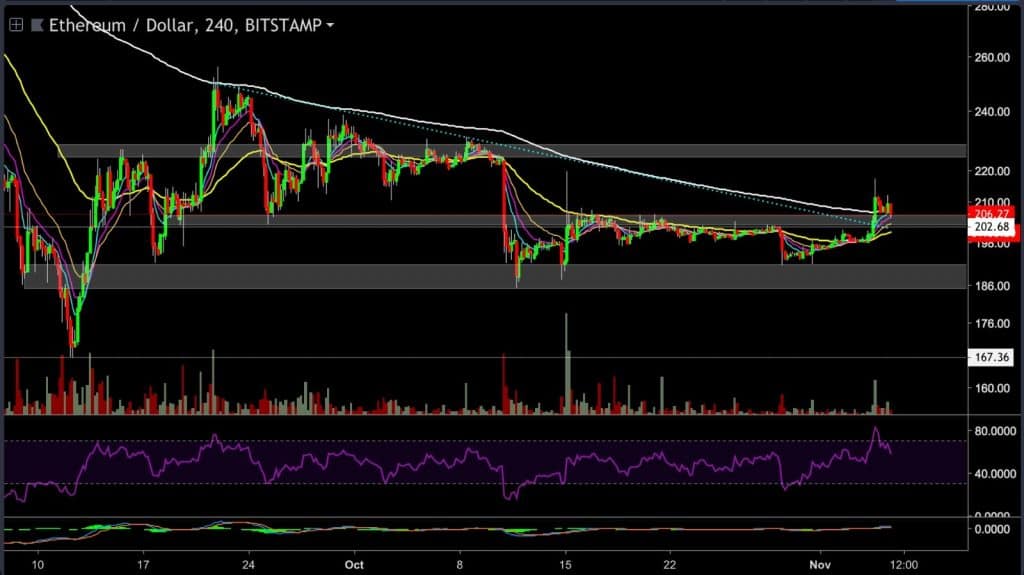 DeFiChain: The Story From the Co-Founders

Cryptocurrency NEO: The Future of Smart-Contracts?