It goes without saying that Bitcoin, as well as other cryptocurrencies, have been booming in popularity over the past couple of years. After their massive surge in 2017, digital currencies became a hot topic that the mainstream audience couldn’t really ignore.

As you may know, the “production” of Bitcoin is particularly different from how traditional fiat currencies are printed. There’s no central authority and instead, bitcoins are generated through a process commonly referred to as “mining.”

However, this is a very intensive process that requires serious machines in order for it to be profitable. While it’s possible to mine Bitcoin on your personal computer or laptop, chances are that you won’t get any measurable profits.

That’s where Bitcoin cloud mining steps into the picture. Providers of services of the kind have also seen a rapid increase in their popularity because of what they stand to offer. So let’s dive a bit deeper.

What is Bitcoin Cloud Mining

Unlike traditional Bitcoin mining, cloud mining refers to the process of Bitcoin mining which utilizes a remote data center that has shared processing power. This type of mining allows the user to mine Bitcoins or altcoins, for that matter, without having to manage the hardware.

A common analogy is the one with cloud data storage centers where you store your information on the cloud without having to worry about maintaining the equipment.

The mining rigs typically housed and maintained in a facility that is owned by a larger mining company. In these cases, the customer simply needs to register for their services and to subscribe to a certain mining contract.

There are certain advantages of going this way. These include, but are not limited to:

Of course, there are certain downsides as well. For instance, the entire process is out of your control and you have no supervision over the equipment for the duration you’ve contracted the service. It’s also worth noting that there are quite a lot of bad agents in the field so it’s very important to make sure that you’ve done your research well before you decide to go down this road. Also, sometimes it turns out that holding Bitcoin is much more profitable than applying for a cloud mining program.

G-Mining Inc. is a cloud capacity provider that allows both advanced and novice miners with direct access to the pool of its mining resources. The company takes care of every aspect of the process, including hardware provision and its subsequent maintenance. This is how it makes the entire process a lot less burdensome for the miners.

According to their official website, the mining capacity their rigs stand to provide is 231.5 PH/s and they promise zero downtime.

Their facility uses advanced ASIC chips and they also claim to have a substantial network of data centers located in both Canada and China.

Currently, G Mining Inc only allows Bitcoin mining but they’ve said that they should also be able to add Ethereum mining and other cryptocurrencies in the nearest future. According to their Certificate of Incorporation, the company is based in Ontario, Canada.

One of the things that make an impression when using G Mining Inc.’s platform is the fairly straightforward user interface. As you register your account and you get to your dashboard, you will be able to set up the exact amount of hash power that you want to purchase. Down below you can also see some of the contract types. Their description looks like this:

As you can see, this contract is for two years and you receive your earnings sent to you every one hour in Bitcoin, which is quite convenient. The minimum hash power you’d have to purchase is 1 TH/s and you can’t withdraw less than 0.005BTC. The machines they use are the Bitmain Antminer S15, which isn’t the latest model but is still quite powerful as each one of them provides hash power of 28 TH/s.

You can also determine the exact amount of hash power that you want to purchase using the slider found on top of the dashboard:

And, last but not least, you can see exactly what revenues to expect from your cloud mining endeavors as the system calculates them for you automatically. 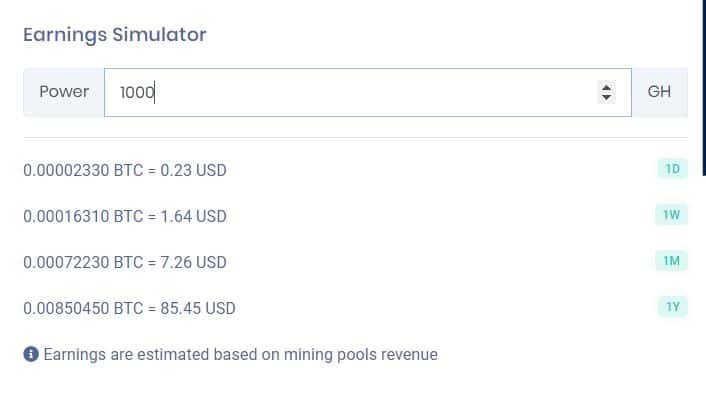 G Mining Inc. seems like an established Bitcoin cloud mining provider with a serious facility and relatively recent equipment. It boasts a significant amount of hash power and it allows the user to buy different amounts of hash power, hence providing the opportunity to control the spendings accurately.

The post G-Mining Cloud Mining: Everything You Need to Know appeared first on CryptoPotato.