Crypto Blog
You are here: Home / Crypto Blog / Bitcoin / How BlitzPredict will change the face of the World Cup

The 2018 World Cup has been surrounded by much controversy, including the serendipitous timing of the United States Supreme Court opening up a potentially billion dollar industry in May 2018 with the legalization of state sponsored sports betting. With an existing strong illegal betting market, it is likely that this is indeed a viable source of revenue at both the state level and in the private sector. This, coupled with other controversial World Cup headlines, has put the World Cup at the center of sports betting for the foreseeable future.

This is great news for newcomer BlitzPredict. BlitzPredict has developed a blockchain based, smart contract application dedication to providing exemplary services to many of the problems currently plaguing the betting industry. Their platform is spearheaded by a prediction recording methodology on various sporting events within the Ethereum blockchain.

Within the BlitzPredict platform, predictions are time-stamped and verifiable, indelibly built into the blockchain. Participants can rely on the permanence and transparent nature of the blockchain record. They are able to utilize BlitzPredict’s system with the secure knowledge that hidden records, selectively deleted losses and results, or inaccurate pricing are impossible within the platform.

Using BlitzPredict during the World Cup

With the World Cup taking place from June 14, 2018 to July 15, 2018, BlitzPredict users and soccer enthusiasts can use the platform to discover reliable and honest betting guidance. They can confidently make informed betting choices based on the transparency and solidity of the betting record from each expert on BlitzPredict.

The BlitzPredict platform currently operates via blog functionality, an MLB model, and a soccer model. Because the MLB model is off to a 25-8 start with a 76% win percentage, it will be interesting and exciting to see what happens with the World Cup in the coming weeks within the soccer model.

The tremendous market potential opened up through the legalization of sports betting through the United States Supreme Court ruling is particularly timely with the World Cup launch this month. As a quadrennial tournament of the most popular sport in the world, the World Cup offers enormous betting potential, particularly with the new regulations in certain US states.

Several factors make this a potentially groundbreaking and headline-producing World Cup. Russia is hosting this year’s tournament, making this the first World Cup held in Eastern Europe. It has previously been held in other parts of Europe, as the hosting venue typically alternates between Europe and the Americas.

In the months leading up to this year’s World Cup, many have voiced their opinion on the  moral and ethical ramifications of a Russia-hosted event venue, citing both human rights violation concerns as well as a Russion national policy not in alignment with the international goodwill historically promoted by FIFA and the World Cup. However, this negative press has possibly elicited more interest in the competition itself, and therefore, in betting during the 64 game tournament.

BlitzPredict operates with the purchasing power of the XBP token. XPB is and ERC-20 token, built on the Ethereum network. It is used to power the BlitzPredict blockchain and it’s expert advice and indelible tranparency as it determines wins and losses from various betting experts.

Cryptopia Exchange announced via Twitter recently that the XBP token will now be listed on their website and available for transactions. They join other exchanges, including Bancor, Idex, and more in making XBP available for deposits, trades, and withdrawals on their exchange networks. 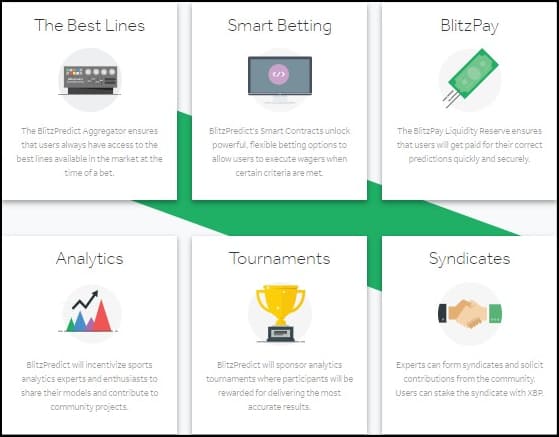 Sportsbook operators are an established, international industry, poised to grow and populate the newly regulated US market. Some, however, have postulated that tech companies will also recognize this new market potential and move into the industry, using their undeniably stronger platform potential to compete with industry giants.

Regardless of who emerges on top, BlitzPredict and their arsenal of content and tools is ready to support both users and industry leaders. In fact, with a planned expansion into the eSports market, tournament launches, and smart contract betting functionality, they are well prepared to meet and exceed industry betting support needs, regardless of the direction the industry ends up taking.

Cryptocurrency and betting users can support BlitzPredict’s current market standing as well as their future growth into these new spaces by purchasing their XBP ethereum ERC-20 token at various decentralized ethereum exchanges, including Cryptopia, Bancor, and Idex.

The post How BlitzPredict will change the face of the World Cup appeared first on CryptoPotato.

Did Bitcoin Price Find a Bottom?

Dogecoin After DOGE Rallied 100%: Do Not Ride The FOMO