Crypto Blog
You are here: Home / Crypto Blog / Bitcoin / How Did ICO Investors Really Do in 2017? 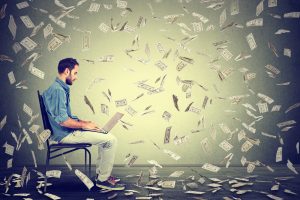 Harry Z. was the one who lured me into public service. When he first approached me, I told him working for the government wasn’t for me. He replied, “That’s why we chose you. You’re going to be working with the governor [of Maryland], William Donald Schaefer. He hates government workers too.”

Who could resist a pitch like that? I accepted.

Harry was my first true mentor. My first week on the job, he told me to consider it my sacred obligation to help the press understand the benefits of the governor’s actions and accomplishments.

“You won’t get any credit for when the press gives the governor positive press,” he said. “But you’ll get the blame for any negative coverage.”

Lucky for me, the press really liked Schaefer. It actually treated him the way our current president in his wildest dreams thinks he should be treated.

But when the coverage wasn’t to his liking? Oh boy, he’d let me know. (The governor had a well-deserved reputation for flying off the handle.)

I’m reminded of my past run-ins with the Fourth Estate because I find myself just as frustrated with the press nowadays as the governor was at times.

What irks me so?

The folks at Fortune. Here’s what they said in a recent article…

We here at Fortune have cast a curious but frequently skeptical eye on ICOs, which from the get-go were ripe for scams. It turns out that skepticism was well warranted.

It’s been a long time since I’ve come across something as smug as this.

Which would be okay if Fortune had a clue.

I’ve mentioned many times that early-stage investors “often don’t even know what they don’t know.” Well, it seems like Fortune shares the same problem.

Instead of its self-congratulatory pat on the back, I’d give it a kick in the pants. Here’s why…

Fortune’s article reported on the results of a study that Bitcoin.com did on last year’s ICOs.

Of the 902 ICOs identified, 531 failed or are failing, including 142 that couldn’t even raise their minimum targets at the funding stage.

The article goes on to quote the study’s colorful description of a “digital graveyard” of “abandoned Twitter accounts, empty Telegram groups, websites no longer hosted and communities no longer tended.”

Okay, got the picture?

No doubt scamming is a big problem. I have nothing but scorn for companies like Tron, whose valuation at one point was higher than Twitter’s. It plagiarized most of its white paper.

Such behavior is utterly indefensible but was hard to stop in last year’s mania environment. Even companies whose ICOs were a joke – like Dogecoin – pulled in big money.

Case in point: self-admitted Ponzi schemer PoWH. It sold $1 million worth of coins in three days. Then it was hacked. A fitting end.

We’ve seen this before with non-crypto startups. Zack Brown asked for donations of $10 on Kickstarter to make potato salad. He raised $55,000.

The Israeli startup Yo raised $1.5 million. Its only function was to send friends the word “Yo” as a text or audio notification.

And Theranos scammed professional investors out of $1.4 billion – the total amount of funding raised from venture capital firms.

When a sector is white-hot and greed takes hold, these things happen. This was a case of greedy investors putting money into stupid ICOs.

In the original Bitcoin report, it said, “Many of the 531 ICOs that have failed or are failing from last year looked sketchy from the very start. In most cases, investors were able to spot the signs and steer clear.” In most cases, but in some…

Well, I don’t doubt there was very little if any due diligence done.

Those investors got caught up in “ICO mania,” jumping into any ol’ ICO that caught their attention.

The solution? It’s clear as day and does NOT involve government regulations.

The solution to the 531 ICOs returning nothing to their investors is… the 531 ICOs. It’s the case not just for crypto investors but for most investors, it seems… Learning is done the hard way.

The lesson: Not all ICOs earn their backers tons of money.

Investors, I believe, have taken note. They should now be warier of ICO opportunities, as they need to be.

But how bad was it really? In truth, calling the ICO scene in 2017 a “graveyard” is extremely misleading. Here’s why.

People Made a Lot of Money Last Year

Many of them really didn’t care about failing ICOs because they were making too much money. Crypto’s valuation as an investment class shot up more than 32 times last year.

A lot of people were making a lot of money.

Bitcoin itself experienced explosive growth. Its closing price increased by more than 14 times over the course of 2017.

Yet, almost unbelievably, hundreds of altcoins grew much faster.

Some $233 million of investment may have turned worthless. But tens of billions of dollars went into ICOs that turned into hundreds of billions.

In fact, that $233 million loss represents 0.04% of crypto’s end-of-year valuation. If we look at the big picture, we see Fortune’s “a lot of wasted money” was actually a fraction of crypto’s gains.

More Losers Than Winners Is the Name of the Game

But I haven’t even addressed the most infuriating part of the article!

It was Fortune’s lazy and, yes, clueless attempt at giving context to what a 59% failure rate means.

Fortune stated that “as many as 75% of all startups backed by traditional venture funding fail.” And it then admitted that the ICO numbers “beat” (meaning lower not higher, I assume) that percentage.

So, there’s Fortune’s simplistic take: ICOs are incredibly risky and startups are worse.

Oh my, where to begin? Perhaps here…

Defining failure by counting losers against winners in your portfolio is plain wrong.

In fact, Fred Wilson of Union Square Ventures says that if you don’t have some failures, you’re not taking enough risk.

The most successful VC firms have more failures than successes.

Harvard Business School says that 80% of a typical VC fund’s returns are generated by 20% of its investments. In other words, a 75% to 80% failure rate is built into a VC’s strategy, where 1 out of 5 investments is a hit.

But how about the outstanding VC funds?

Fred Wilson says that the failure rate in a good VC fund should be around 40% to 42%.

(I should note that we simply don’t have the history to compare good ICO investing with typical ICO investing.)

Horsley Bridge Partners is a large, far-flung investment company based in San Francisco. It took a more granular look… at more than 5,000 startups. It put the failure rate of seed/early-stage companies at 62% and of mid- to late-stage companies at 52%.

The VC community has studied this specific distribution of many failures versus few big winners. They call it “the power law of distribution.”

Its distinguishing feature is that a few big winners cancel out the many losers with ample profit left over for investors. 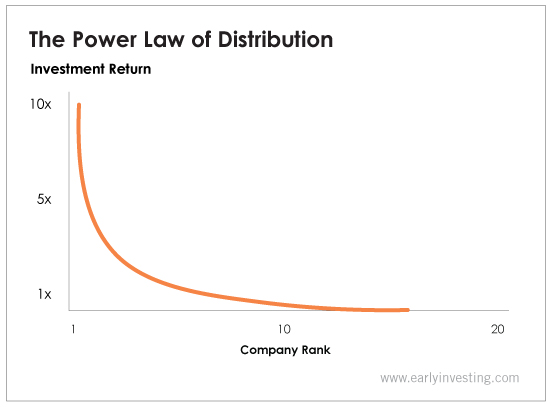 As you can see, returns are skewed. Most companies end up gaining very little… between zero and 1X.

But the companies that do well can offer life-changing returns.

ICO investing and VC startup investing are not the same thing. But I believe the same distribution dynamic applies to both… with winners being oversized but not plentiful and failing companies dominating one’s portfolio.

ICOs make for easy prey these days, especially on a superficial level. But that’s no excuse for Fortune failing to mention the most basic fact of all: that the majority of people who invested in ICOs in 2017 did very, very well.

After all, there’s no such thing as investors making too much money, is there?

Now, if Fortune pointed out that some ICO companies raised too much money last year, I would have been all ears. It even could have quoted something I said last year: “When a company gets a flood of money pouring in, sometimes it drowns.”

That’s a valid concern. It’s too bad that Fortune went in another direction and got lost in the wilderness.

P.S. Investing in startups is a long game, but it offers potentially huge returns that reward those who plan ahead and get in for the long haul. My colleague Marc Lichtenfeld over at The Oxford Club also helps people plan for their futures. His new book, You Don’t Have to Drive an Uber in Retirement: How to Maintain Your Lifestyle without Getting a Job or Cutting Corners, is the ultimate guide to surviving your golden years.

It has easy-to-follow tips for reaching your financial goals and calculating exactly how much you need to retire.

You can order your copy today by clicking here.

The post How Did ICO Investors Really Do in 2017? appeared first on Early Investing.

How Many Startup Investments Are Enough?