Crypto Blog
You are here: Home / Crypto Blog / Bitcoin / How Does Bitcoins Rise Affect The Altcoins?

Opinion – Bitcoin officially crossed the $8,000 mark, signaling to the crypto verse that the leading currency is ready to reignite the bull market.

But while Bitcoin has jumped over 21% in the past week, Ethereum and the rest of the Altcoins have remained stagnant (with some actually declining in price).

Some of the following possible reasons for this theory are:

Bitcoin is the most liquid cryptocurrency. Most other Altcoins need to be converted to Bitcoin or Eth before they can be liquidated to US dollars. For this reason, Bitcoin remains most attractive to traders not only because it’s a first entry point into the crypto space, but it’s also the fastest exit point.

As the oldest and most dominant Cryptocurrency, Bitcoin holds the largest market share (currently 45%). However, Bitcoins market share has declined significantly since January of last year, where it held 85% market share. This decline has been due to the rise in alt coins and that were funded through ICO’s on Ethereum’s platform. 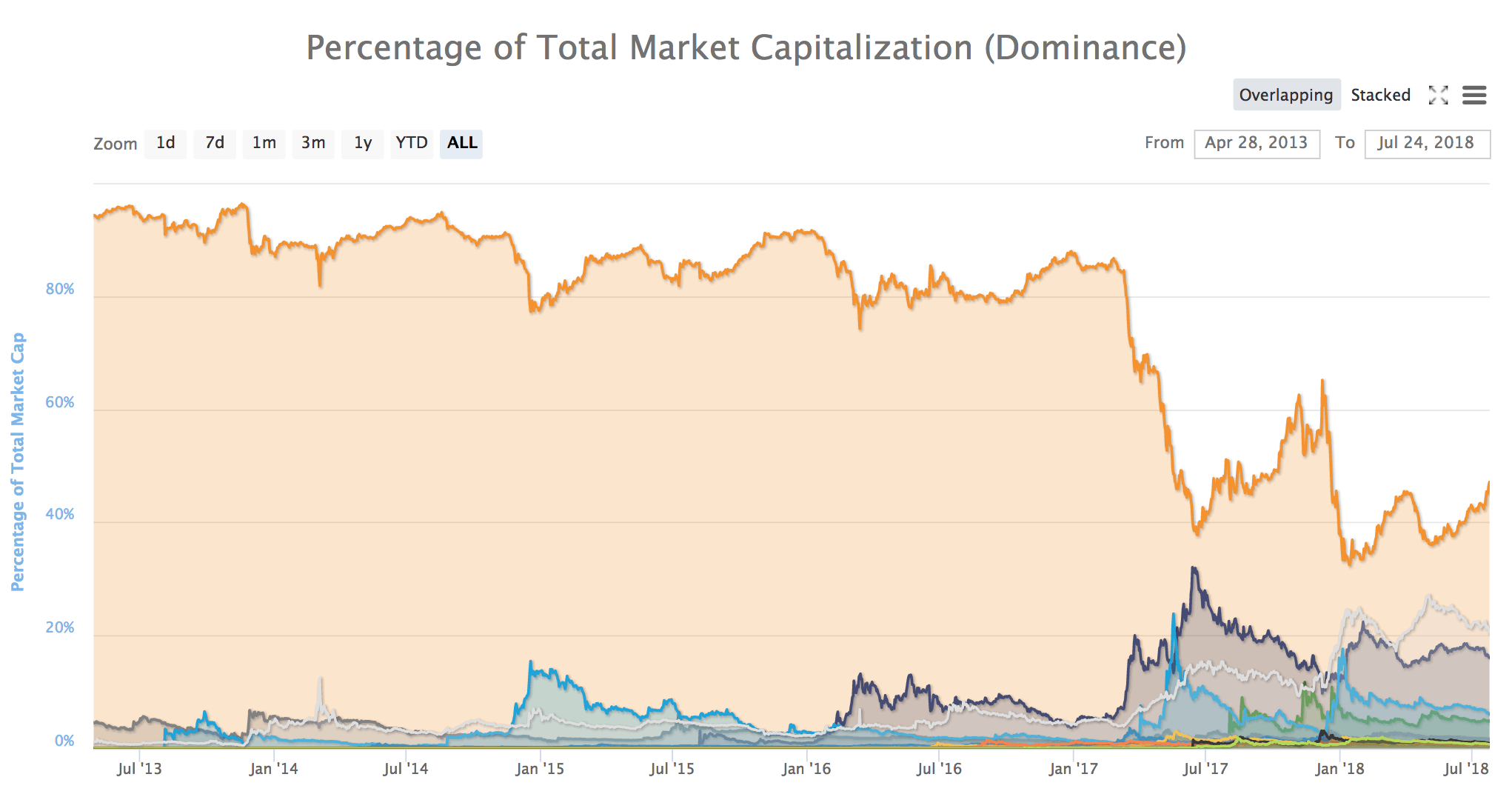 Bitcoin is fundamentally still considered to be the most secure crypto asset. It has the largest network of mining operations and the most processing power. It also hasn’t compromised security or decentralization in order to achieve scalability. Bitcoin still uses a proof of work consensus mechanism, and attaches layer 2 scaling solutions like lightning network in order to achieve faster transaction speeds. Although exchanges holding Bitcoin have been hacked, the Bitcoin blockchain itself has never been hacked in it’s almost 10 years of existence.

These fundamentals are what have earned Bitcoin the title of ‘digital gold’, and it’s the reason why the SEC and major institutions are more willing to put their stamp of approval (and their money) behind it, hence the faster growth in price.

The vast majority of trading that occurs in the crypto markets are between BTC and Altcoin trading pairs. Since most Altcoins do not pair with fiat currencies (and only a few are paired with stable coins like USTD), Bitcoin is the next best option. Therefore, when Bitcoin is stable, it forms as the ideal base currency for buying Altcoins (which is why Altcoins tend to do well when Bitcoin goes sideways).

A bullish Bitcoin usually drives Altcoin holders to dump their Altcoins into Bitcoin (because why take risks betting on smaller volume coins when you can make gains on the largest and most traded cryptocurrency).

Considering that Bitcoin is the ‘anchor’ of the crypto market, when Bitcoins price starts to fall, traders begin to sell all other coins and retreat back to fiat or stable coins like Tether.

Bitcoin has established itself as the first and most dominant cryptocurrency. Despite the rise in Altcoins, Bitcoin still has the advantage of being widely recognized and operating as the primary trading pair for al other Altcoins.

As Bitcoin makes its climb to $10k and potentially beyond, we should expect to see ETH and other Altcoins follow suite. Ultimately, knowing how the coins in your portfolio are affected by the rise and fall of BTC prices will only help you make smarter and more profitable trading decisions.

Disclaimer: These are the writer’s opinions and should not be considered investment advice. Readers should do their own research.

The post How Does Bitcoins Rise Affect The Altcoins? appeared first on CryptoPotato.

Coinbase Launching a Bitcoin Visa Card: But What About Crypto Adoption?

Research Reports ‘Altseason’ Upon Us, But Not For XRP or EOS