Crypto Blog
You are here: Home / Crypto Blog / Bitcoin / How One Small Tech Company Is Shaping the Driverless Car Market 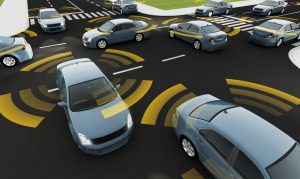 And the player that will largely determine which companies grab a lion’s share of this enormous market?

Argo is designing and building an automotive self-driving system. It’s caught the eye of Volkswagen and Ford, both of whom are now using Argo’s driverless technology. Ford acquired a majority stake in the company for $1 billion last year. And Volkswagen invested $2.6 billion in Argo last week.

That puts Argo’s valuation at more than $7 billion.

Waymo is currently leading the race for driverless cars. It’s starting to pilot ride-hailing services in two cities this year. And GM is a close second. But because of Argo, Ford and Volkswagen are not far behind the two front-runners.

Ford is testing its third-generation Fusion sedan with Argo’s technology and plans to have self-driving cars with Level 4 capability by 2021.

(A Level 4 car can drive on pre-mapped routes and handle anything on its planned course without the intervention of a driver. A Level 5 car is so independent that there’s no steering wheel.)

It’s still early, though. If this were a baseball game, I’d say we were in the middle innings. A lot can change in the next three to five years, when Level 4 and 5 cars should see accelerated adoption.

There’s no guarantee that the first company to scale the commercial use of driverless cars will be among the ultimate winners. But getting there first does matter. First-to-market advantages are real. Think of the critical competitive advantages Uber had in terms of brand and user adoption.

And the shifting web of partnerships and alliances among car companies and driverless tech companies will heavily influence which companies introduce their driverless cars first. That’s why Argo will continue to play an important role in determining who will come out on top.

Argo co-founder and CEO Bryan Salesky says that he’d welcome additional strategic or financial investors to help share the costs of bringing self-driving vehicles to market. “Our platform is scalable to just about any type of vehicle,” he says.

Salesky was there at the very beginning of self-driving cars. He was the senior software engineer on the winning team in the 2007 autonomous vehicle challenge funded by the Defense Advanced Research Projects Agency (DARPA). So it’s fitting that his company is at the forefront of the emerging market today.

The post How One Small Tech Company Is Shaping the Driverless Car Market appeared first on Early Investing.

How To Modernize the SEC

How to Use EquityZen, a Pre-IPO Investment Platform for Accredited Investors