Crypto Blog
You are here: Home / Crypto Blog / Bitcoin / How This Fintech Company Is Making It Easy to Buy and Sell Gold 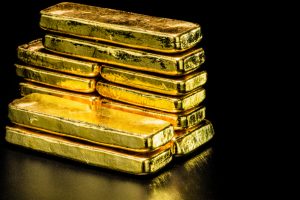 One of the (many) reasons we like to invest in bitcoin is it provides a hedge against the traditional fiat economy. And with the Chinese renminbi weakening, Iran seizing another oil tanker, the European economy slowing down and global debt topping $246 trillion (U.S. national debt alone is more than $22.5 trillion), you really need a hedge. And it’s no accident that bitcoin prices surged from around $9,600 to more than $11,400 over the past week as bad economic (and political) news spread.

The traditional hedge against the economy is gold. And gold prices are up as well. Gold was trading at around $1,420 to begin the month. It’s trading around $1,470 now. And it was trading below $1,400 a month ago.

Bitcoin and gold share some similar characteristics. Both are scarce. By design, the total supply of bitcoin cannot exceed 21 million. Its circulating supply is about 17.9 million.

Both have value because people have chosen to give them value. And both struggle as forms of payment. Bitcoin is digital, so it has the potential to become the native currency of the internet and e-commerce. But because bitcoin is such a young asset, its value is too volatile for it to serve as a good payment option. Tax issues and slow transaction times (though that’s improving) have also hindered bitcoin’s growth as a payment option.

Gold hasn’t been a viable payment option for at least a century. Yes, gold backed the U.S. dollar until 1971. But gold’s inherent problems – it’s difficult to transport, store and, well, actually use for payments – helped create the fiat currency world we live in today. The digital economy as we know it could never have developed if gold were a primary form of payment. You can’t transfer gold electronically.

But one fintech company is trying to change that. Glint wants to make gold a viable payment option in the modern economy – and more like bitcoin.

Here’s how it works:

So why would anyone use Glint, besides the fact that spending gold is cool? Because gold holds its value better than most fiat currencies, including the U.S. dollar. Consider this: In 1970, a gram of gold would have bought you two cheeseburgers. Today, that same gram of gold would buy you 12 cheeseburgers. Meanwhile, the cheeseburger that cost you $0.55 in 1970, when adjusted for inflation, now costs $3.47.

This is what happens when you can print unlimited amounts of money. Scarce items, like gold and bitcoin, will hold their value over time far better than fiat currencies.

It will be interesting to see if Glint gains traction in the U.S. (It’s already being used in the U.K. and Europe.) Spending gold will appeal to gold bugs. And holding gold and converting it to foreign currencies to spend at super-cheap rates will appeal to business travelers.

But I think Glint’s real value is making the process of buying and selling real gold easy. All you need to do is download the app to get started. And as the popular stock trading app Robinhood has shown, if you make the process easy enough, people will use it.

The post How This Fintech Company Is Making It Easy to Buy and Sell Gold appeared first on Early Investing.