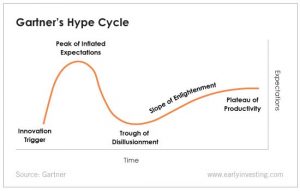 Deloitte has been busy feeding the negative blockchain news cycle.

It recently published the results of a survey of more than 1,000 “blockchain savvy” managers. The survey found 40% of them were “wary” of blockchain’s efficacy. In the U.S., 44% were skeptical.

Two years ago, only 34% expressed skepticism.

It gets worse. In the U.S., 30% said they still lacked a “compelling application” to justify implementation [of a proposed blockchain project, presumably].

On the face of it, this is not good news for blockchain enthusiasts. (Let’s put cryptocurrency to the side. This is about the future of the underlying technology.)

It doesn’t make much sense to me.

From TradeLens, the IBM-Maersk blockchain venture, cutting global shipping times by 40% and having 94 partners to the World Bank issuing a blockchain-only bond (“bond-i”), there are dozens of examples of live use cases.

The list goes on and on. Stock markets are being put on the blockchain. Property, produce and invoices are too.

Skepticism should be shrinking, not growing.

It doesn’t make sense, unless you consider Gartner’s “Hype Cycle.”

Then it makes perfect sense.

So what is the Hype Cycle and how does it work?

It has five different stages…

This is how the five stages are visualized… 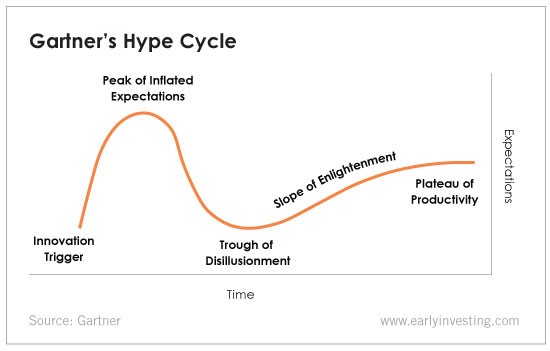 So where is blockchain technology on this chart?

It’s not quite halfway down the decline from the Peak of Inflated Expectations to the Trough of Disillusionment.

That sounds about right. But if you’re willing to invest early, there are big returns out there.

Here are some other things you should consider…

The choice is yours, of course. Gartner’s Hype Cycle gives you a useful context to make smarter choices and better understand the interplay of risk and reward.

With that said, Adam and I are big believers in investing ahead of the crowd… before the Slope of Enlightenment attracts investors looking more for safety than an edge.