Crypto Blog
You are here: Home / Crypto Blog / Featured / Is bitcoin’s 2020 rally another flash in the pan?

Crypto analysts are split on whether bitcoin’s rise this year is driven by unique factors or is just its latest bout of volatility. But many agree on one factor: an upcoming cut to the supply of bitcoin.

Bitcoin has soared by almost half this year, to more than $10,000, for the first time since October. On Tuesday it hit its highest in five months.

The cryptocurrency’s 11-year history is replete with fast ascents and equally rapid plunges. In late 2017, it rose three and a half times in just 35 days to reach almost $20,000. It then slumped 70% in seven weeks.

Such wild and often inexplicable swings are why bitcoin faces a struggle to become a functioning currency.

This time around, some market players point to a confluence of drivers not seen before. Arcane tech factors, expectations for mainstream acceptance and macroeconomic trends are leading markets to look again at bitcoin’s worth, they say.

“You can argue that there is a fresh valuation going on,” said Russ Mould, investment director at AJ Bell, a stockbroker that oversees assets worth $71 billion.

Most fundamentally, many cite growing demand for bitcoin before its latest “halving” — a 50% cut in the production of the cryptocurrency due in May that is one of the few observable events known to materially impact price.

A rule written into bitcoin’s underlying code slashes the number of new coins awarded to the miners behind the global supply of bitcoin.

In the year after the two previous halvings, in November 2012 and July 2016, bitcoin rose around by 80 times and four times respectively. The exact proportion of the gains caused by the halving is unclear.

“It’s a rare observable factor – if you look at previous events, in each case there has been a quite clear and discernable spike in the value of bitcoin,” said Windsor Holden, a payments consultant who tracks crypto and blockchain. 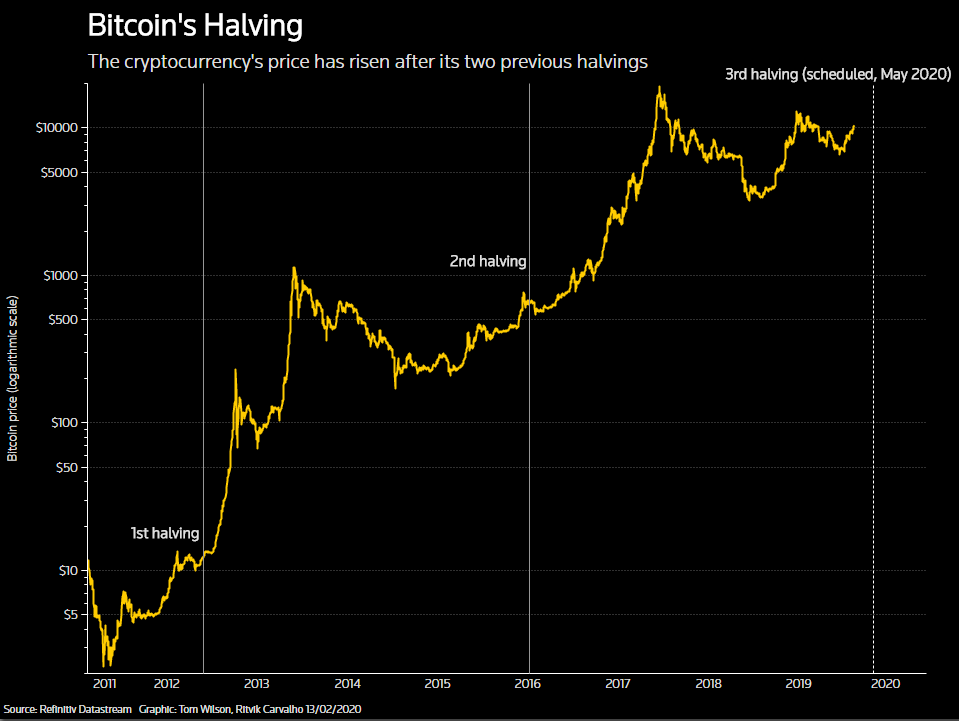 But others doubt bitcoin’s latest rally is underpinned by anything more substantial than the previous booms.

“The recent rally has been driven by the usual hype cycle that we have very reliably seen every two to three years,” said Michel Rauchs, author of several Cambridge university studies on cryptocurrencies and blockchain tech.

“We have these mini-bubbles, and the momentum that it creates – bitcoin first, then these other coins. It’s a self-fulfilling prophecy.”

Major cryptocurrencies that tend to move in correlation with bitcoin have also gained this year. Ethereum has more than doubled; Ripple’s XRP token is up over 75%.

Other factors cited for the rally, such as greater demand for assets uncorrelated to mainstream markets following the U.S. killing of an Iranian military commander last month, are also questionable.

Bitcoin’s “safety” characteristic is unclear. It has regularly fallen in times of geopolitical stress in recent years.

Looser central bank policy is also given as a reason bets on riskier assets. But that link is hard to prove, too. Bitcoin has fallen during previous spells of easy money.

Also widely cited are expectations that cryptocurrencies will go mainstream, as central banks step up their research into digital currencies after Facebook’s push to offer its Libra coin. Some, such as China’s, are getting closer to issuing their own coins.

And in comments that traders said stoked buying in bitcoin, U.S. Federal Reserve Chairman Jerome Powell told U.S. lawmakers on Tuesday that the Fed was “working hard” on the issue, while it remained undecided on any digital dollar.