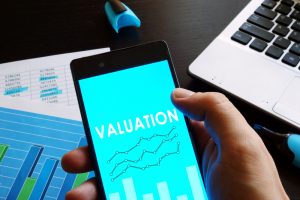 Q: What exactly is a valuation? And how should we take that information into account when we invest in a startup?

A: A valuation is how much you think a startup should be valued. The question is, who is “you”?

Take your house for example. You may have one number in mind. Your spouse could have another. Your real estate agent may have yet another. And Zillow and other online sites have their own methodologies to come up with a price.

Startups aren’t all that different. In a seller’s market, founders have a lot of say in the valuation. In a buyer’s market, investors, especially the lead investors, have a large (and often the biggest) say in assigning a valuation. Closer to home, in the crowdfunding space, some portals like to add their voice to the mix, especially if they think the founders have overestimated the valuation of their company.

Startup valuations are based on the same equation – total shares multiplied by price. But it’s not market driven. Because they’re not liquid, share prices don’t rise and fall. They’re not allowed to be traded on a public exchange like the New York Stock Exchange or Nasdaq.

Let’s return to our house example. Your house isn’t subject to thousands of daily trades. The only way to find out its worth is to put it on the market. You value it at a certain price. And the market will tell you if you nailed it, if you’re way off or if you’re somewhere in between. If the house sells in the first hour, you’re probably kicking yourself. You could have gotten more. But if your house stays on the market for a couple of months without a single inquiry, you probably aimed too high and need to think about lowering the price.

Startups go through something similar. Every time it does a raise, the startup gets a valuation. It can also be too high or too low. I’ve seen both cases. But unlike houses, you can’t change the valuation of your startup in the middle of a raise. Once you’ve submitted it to the SEC, the valuation becomes “official.”

As an investor going back decades, I’ve always loved a bargain. There’s nothing better than investing in a great company at a great price. So I usually give low valuations an extra look and give high valuations the cold shoulder.

How do you know what’s high and what’s low? Like shopping for houses, you acquire a feel for it. The more startups you look at (while paying attention to their valuations), the better you’ll get at evaluating a startup’s valuation.

Remember, you’re weighing valuation in combination with a few dozen other variables! But, most definitely, price does matter.

Q: The Fed says it’s not raising interest rates because it needs to figure out what’s going on with inflation. What’s to figure out? And why aren’t they worried about our mounting debt?

A: I believe the Fed actually wants higher inflation so it can begin wiping away some of the federal government’s enormous and unpayable mountain of debt. The Fed will never come out and say this because inflation is a horrible tax on the bottom 95%. But Goldman Sachs just said it expects the Fed will let inflation “run hotter than usual” next year. Here’s an excerpt from CNBC’s recent reporting:

Goldman believes the Fed will decide to allow overshoots of its inflation goal next year, which would take rate hikes off the table…

“Our economists believe [the Fed] is leaning toward adopting an average inflation-targeting approach. If implemented, they believe this change would decrease the likelihood of further near-term policy tightening and lead to a small and gradual increase in both expected and realized price inflation,” Goldman equity strategist Ben Snider said in a note.

Goldman, the Fed and the Treasury Department, which manages U.S. debt, are all attached at the hip. Treasury Secretary Steven Mnuchin is just the latest in a long line of Goldman partners who went on to run the Treasury. The three institutions are thick as thieves.

So I think the Fed is looking for a way to prepare the country for higher inflation going forward. Inflation is the establishment’s preferred way of dealing with debt problems. In its eyes, it’s a better alternative than letting legacy companies (and banks) fail. Because that’s ultimately the choice it faces. For debt-ridden dinosaur companies to survive, you need inflation and low interest rates as a tailwind. This inevitably means higher asset prices and more money sloshing around.

The Fed’s primary concern right now is instilling confidence in the economy (and the stock market). So it isn’t going to come out and say it’s worried. But its actions speak loudly – it is EXTREMELY worried.

The Fed has essentially come out and said it’s done raising rates for the foreseeable future. It knows the economy needs low rates, loose money and more debt to keep “growing,” if you can call it that. Without continued support from the Fed, the debt bubble would likely start to collapse. Many businesses would go bankrupt at normal interest rates.

The Fed should be worried. We’re in the middle of a huge and growing debt bubble. Nobody can say for sure how this is all going to play out. This is just my current read on the situation.

Big Tech Censorship Creating Startup Opportunities
Focus on Traction When Investing in Startups
Understanding the Difference Between Private Equity and Startup Investing
China’s Industrial Espionage Is Bad Policy
Emerging Markets vs. U.S. Markets – Which to Buy?
Startup Investing in a Recession
How One Small Tech Company Is Shaping the Driverless Car Market
Mailbag: Structuring Your Alternative Investments, the Most Indispensable Founder Quality