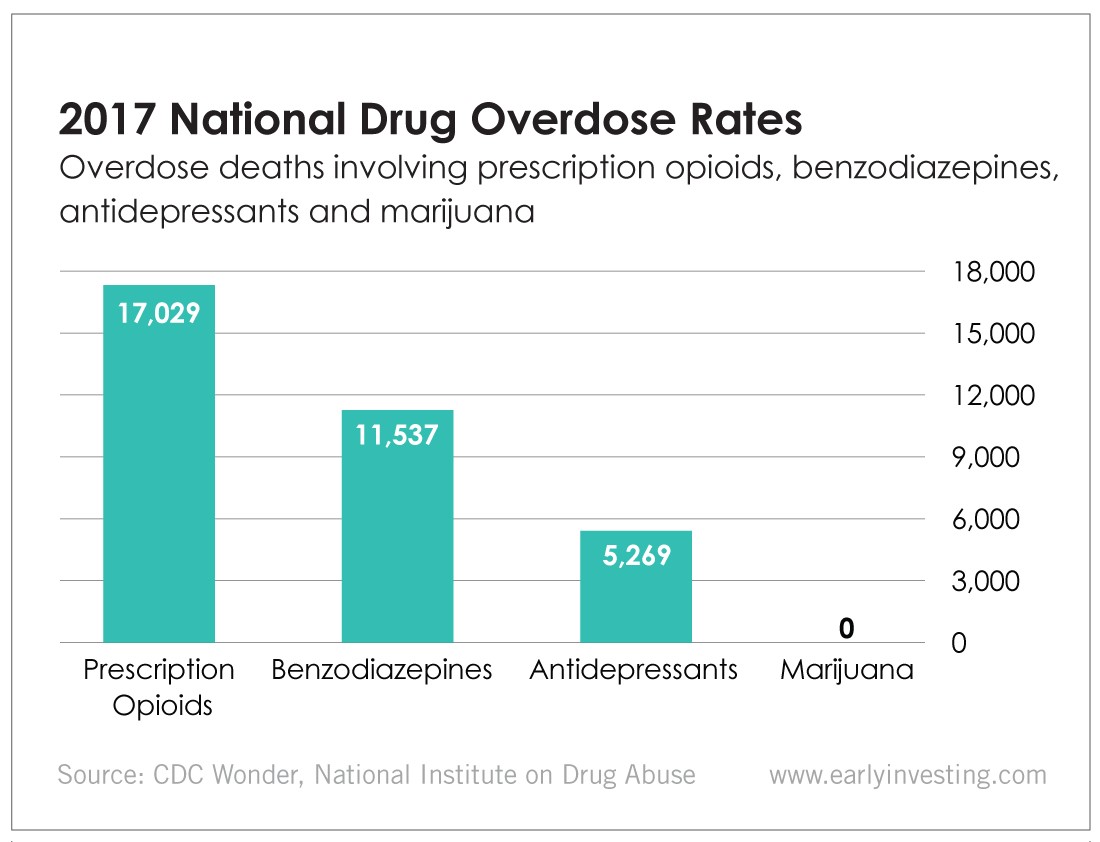 Colorado Rep. Edie Hooton co-sponsored the bill. “It was designed to give physicians a legal, open option to discuss [medical marijuana use] with patients. It normalizes the conversation around the issue,” she said.

This is the kind of legislation we need. Medical marijuana has been shown to be an effective alternative to opioids for conditions like chronic pain, inflammation and more. It can also be used to treat epilepsy, anxiety, depression and more.

And we sorely need that alternative. Today’s chart shows the 2017 overdose death rates of prescription opioids, benzodiazepines (Valium, Xanax, etc.), antidepressants and marijuana. (The CDC doesn’t have final data for 2018 overdose rates yet.)

One of these things is not like the other. The CDC and the National Institute on Drug Abuse reported zero instances of teens or adults overdosing on marijuana alone. But prescription opioids, benzodiazepines and antidepressants were involved in thousands of overdose deaths. Overdose death rates for benzodiazepines rose 916% from 1999 to 2017. Overdose rates for prescription opioids rose 395% during the same period. And overdose rates for antidepressants rose 201%.

Despite these numbers, many health professionals are still hesitant to recommend medical marijuana to their patients. That’s in large part because the U.S. government lacks sufficient research on the subject.

But the fog is slowly lifting. In fiscal 2017, the National Institutes of Health supported 330 cannabinoid research projects totaling around $140 million. And just last week, Senator Dick Durbin (D-IL) introduced the Expanding Cannabis Research and Information Act. The act would remove restrictions on federal research into cannabis and expand studies on its potential benefits and harms.

Until the federal government acts though, we have to rely on the states. And Colorado’s new legislation is a step in the right direction. It opens the door for patients to access a much safer alternative to opioids and other drugs. And hopefully it will inspire other states to do the same.

PR: Pbet Announces IEO Launch on LATOKEN How Governments Steal Your Money and Conceal It Through Inflation
Scroll to top