The correction down continues. There was a significant drop in the trading volume, partly due to the announcement of futures contracts. At the moment, we feel a sense of stability because of strong support at 10K, technically it does not seem to hold. However, one must take into account the fact that the market has behaved similarly in the past, by that we mean Bitcoin trading against the dollar. You should try to figure out what are the reasons for the correction and what insights you can derive from it.

These are our understandings and possible reasons for the correction:

In the media, the hype around Blockchain technology and around Bitcoin continues, but most of the media reports seem to focus on the volatility of Bitcoin’s price, without mentioning the underlying technology and the potential. The speculation around the price is making the mainstream uneasy, and it will be interesting to see how many of the newcomers will be interested in the technology and contributions that it brings to the field.

With the decrease in demand for Bitcoin, there is a significant drop in commissions. We can’t say with absolute certainty, but, some say the main factor influencing the fees was the heavy load, and not (as many thought) the combination of a cyber-attack. In addition, solutions such as, the growing lighting network are likely to reduce the rate of commissions significantly in the future.

In the Altcoins sector, the market appears to be relatively stable against Bitcoin, but some of the Alts continue to climb. Investors have been hedging their investments in NEO and ETH recently. Possible reasons for this are: the size of the market, liquidity, and, of course, a continuous climb since the beginning of the year. In contrast to the dollar, the effect of the prolonged decline in Bitcoin’s price is seen in the market, with a large number of the Alts decreasing along with the Bitcoin price.

It seems that the buzz around ICOs continues. Since the decrease in number of ICOs at the end of 2017, it appears that the number is increasing rapidly. An integral part of total ICOs end successfully, and some of them have generated handsome profits for their investors, leading to growing interest in the market.

In Japan, Coincheck exchange was breached by hackers this week. During which 523 million XEM coins were stolen from the wallets of about 260,000 users. It’s difficult to estimate the exact dollar amount stolen, yet it is more than $400 million, making this breach the biggest theft in history. The company announced that it would compensate each one of the users affected by the breach, depending on the amount of coins stolen from it and at a rate of 88.5 Japanese yen to XEM.

In light of the break-in, Bank of Japan Chief Executive, Hiromi Yamaoka, Issued a statement that he intends to adopt cautious and moderate regulation, which will enable investors to eliminate investor risks and realize the potential of innovative technology. He said that there is no need for identical regulations on the global level, but rather a common recognition of the risks resulting from the use of crypto.

In South Korea, the government has officially issued guidelines and clarifications for banks that provide services to crypto exchanges or crypto traders, in regards to their compliance with the money laundering regulation. This is in addition to last week’s implementation of the Real-name system, which prevents merchants from opening anonymous accounts for trading. Implementation of the system is expected to take effect today (30.1).

According to unofficial reports, Samsung will begin manufacturing ASIC chips and other equipment for crypto mining. A month ago, Samsung created a chip for an Ebang bitcoin device.

In Switzerland, Finance Minister Johann Schneider-Ammann issued a statement explaining that Switzerland wants to become a crypto nation. This is in light of the enormous potential in the ICO market. Keep in mind that right now, Switzerland has been a very welcoming country to the crypto entrepreneurs, which is the basis for dozens of projects, including Tezos and Bancor. This announcement coincides with an announcement by the Swiss bank UBS chairman, Axel Weber, earlier this week that the bank would not allow trading in Bitcoin due to tightening regulation, which could lead to a significant drop in Bitcoin’s price.

Russia – Anatoly Aksakov, chairman of the finance committee in parliament, announced this week in an interview with the Russian news agency, that the Moscow stock exchange would probably allow crypto trading.

Facebook announced that is banning all ads promoting crypto. This includes Bitcoin and ICOs.

At the World Economic Forum in Davos this week, discussions were held about Blockchain, Bitcoin, and all of their implications. While Blockchain technology was a very popular discussion topic at the conference, Bitcoin was widely criticized. Among other things, there were claims that the value of Bitcoin is not capable of analysis and does not reflect its true value; The anonymity offered by the coin, and the potential for using it to launder money and finance terror.

After last month, CoinMarketCap abruptly removed the South Korean crypto exchanges from the price calculation on the site, but shortly after do they replaced them. Just a reminder: this move was made without prior notice from the company. As part of this step, approximately $50 billion was added to the market value calculated by Coinmarketcap.

Edna Friedman, the CEO of Nasdaq Stock Exchange, announced this week that they are looking into the possibility of launching futures contracts for crypto currencies, but the company has not yet provided exact details of the contracts to be launched. According to Friedman, this is a different product than the one offered by CME and CBOE. An official date for the launch of the contracts has yet to be published, but according to various reports, the service may be launched in the second quarter of 2018.

After the beginning of the month, Microsoft blocked the possibility for its customers to pay in Bitcoin at the company’s virtual store, mainly due to high currency and commission volatility at the moment.

Tether, the company that issued the usdt coin, announced this week that it had stopped working with the firm of Friedman LLP. This is due to suspicions that the company has no backing for the money it had issued, and for their cooperation with Bitfinex. Furthermore, the CFTC sent a Subpoena to Bitfinex and Tether, who share the same CEO, Phil Potter. This is because Tether has not yet verified that it has a backlog of $2.3 billion USDT that was issued. According to a report issued by the firm of Friedman LLP in September, at the time, the company had an estimated amount of  443 million, while the total value of the USDT was about 420 million dollars. However, the identity report of the banks was not disclosed, and since then, it has not been clear where Tether’s money is being held.

As noted above, the correction continues. The $10K support seems to be a little shaky. The following resistance is much more down, at prices of $7,500 and afterwards – around $5K-4K. The temporary support around 10K will be tested in the coming day, against the wave of investors hedging out. On the exchanges it’s traded around $ 10K with slight lapses, and resistance in this range, around $12K. Currently on a downtrend. 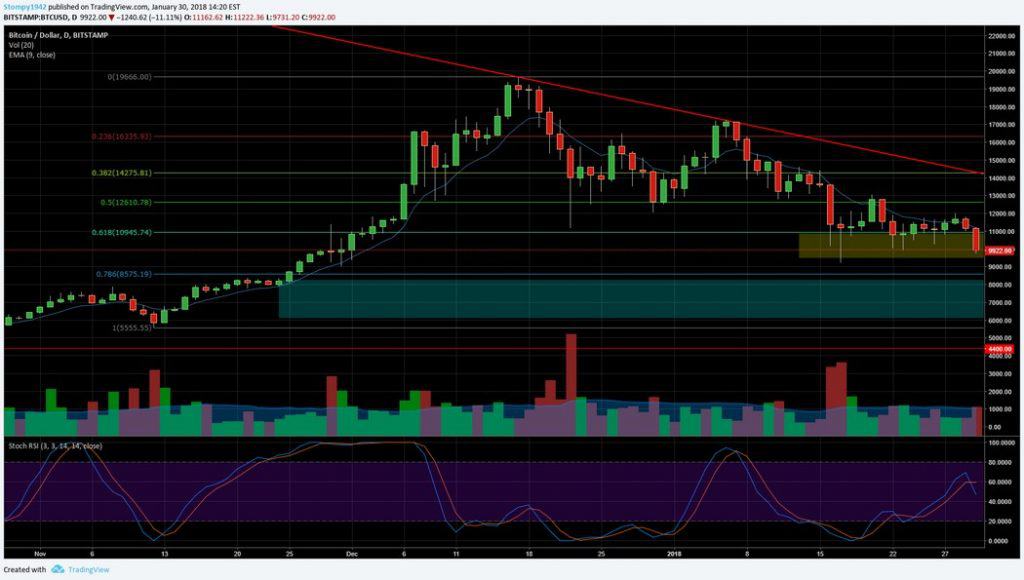 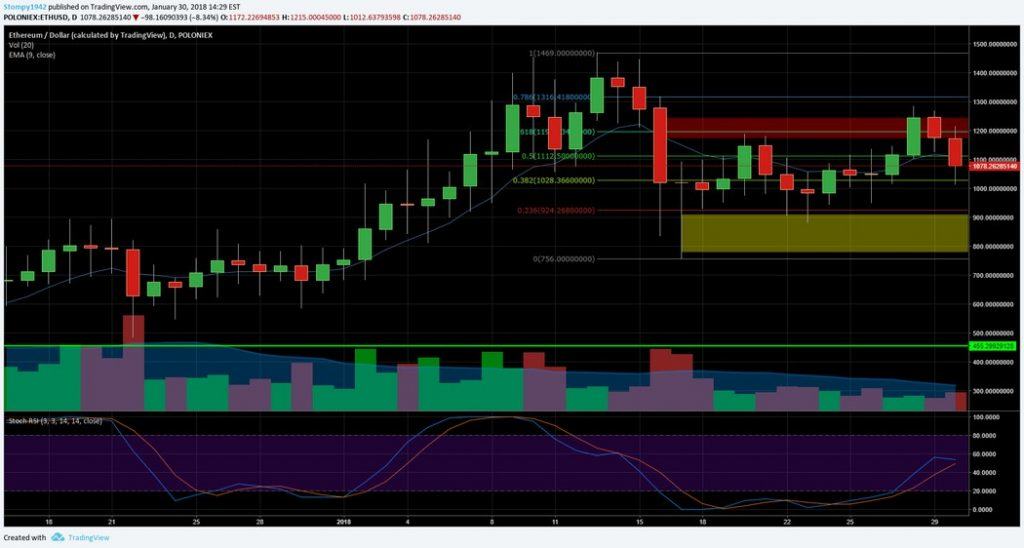 Against Bitcoin, according to the weekly chart, it appears that Ethereum may be a safe place to hedge against the dropping Bitcoin – 0.1BTC Resistance areas breached after three tries to break. The next resistance levels are at 0.0115BTC, support is built around 0.1BTC. 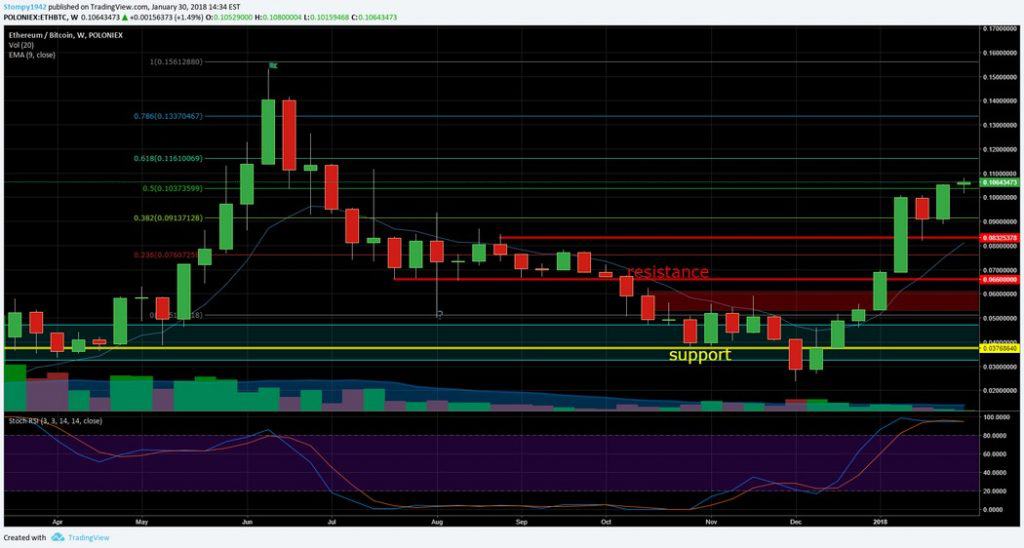 Against the dollar – the price corrects along with Bitcoin. Levels of support currently are around resistance levels before December. Support in the areas we are at. From this point, the way down may be painful. 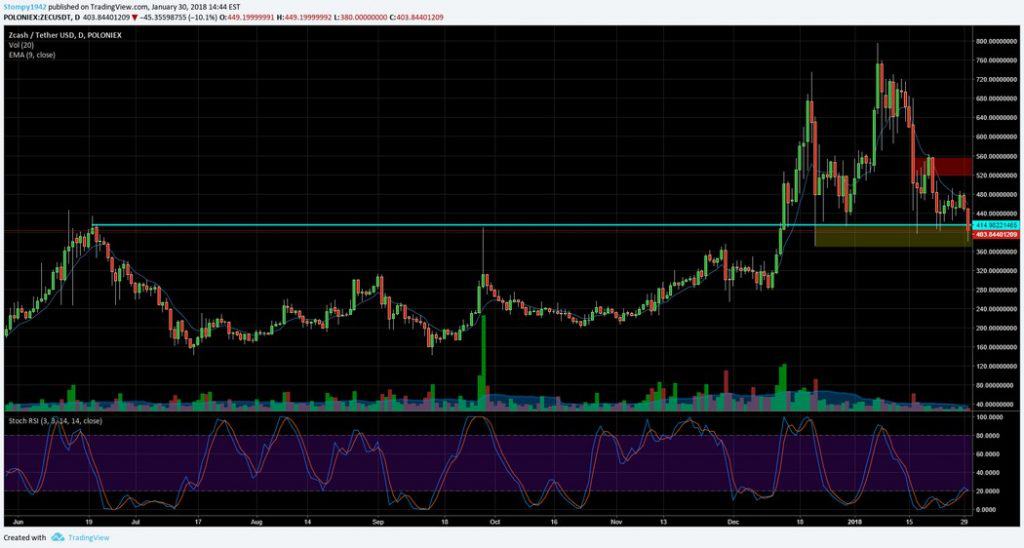 Against Bitcoin – after a quick climb, the price appears to be stabilizing. The price has been rising since the beginning of the year. Traded at support levels around 0.038BTC with resistance at 0.043 BTC and the RSI is pretty low (positive sign). 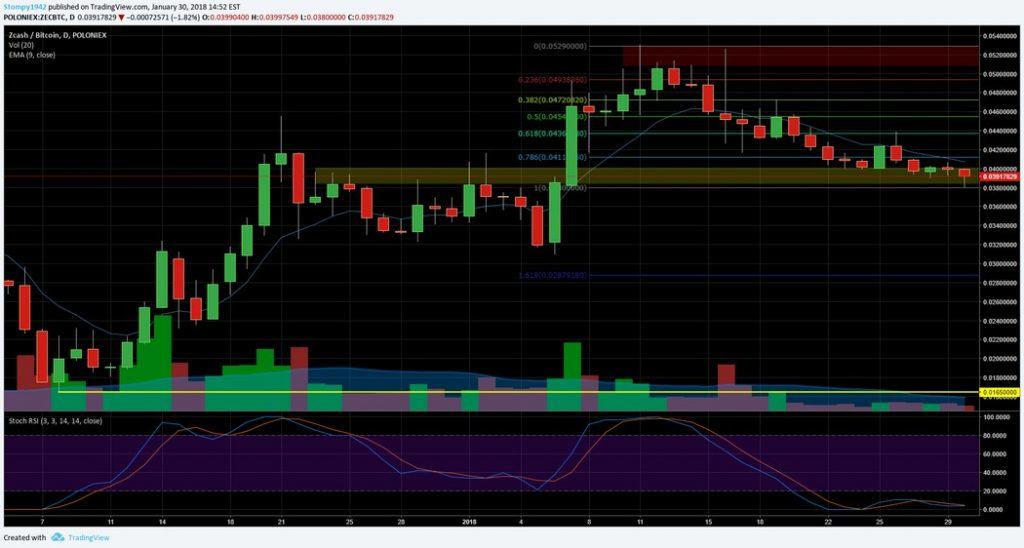 Against the dollar, the price seems to be affected by Bitcoin trading. Support is far from the areas where the price is trading, at $280, $235, and with resistance at $340. 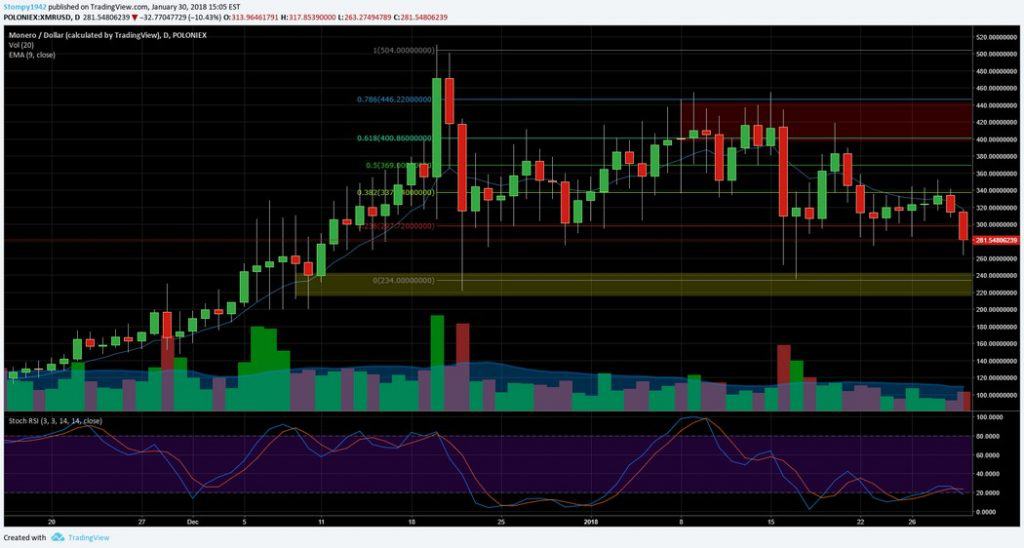 Compared to the RSI, Bitcoin is fairly stable. Over the past week, the price tends to drop slightly. Support lies around 0.022BTC and resistance at 0.032BTC far away from its ATH. 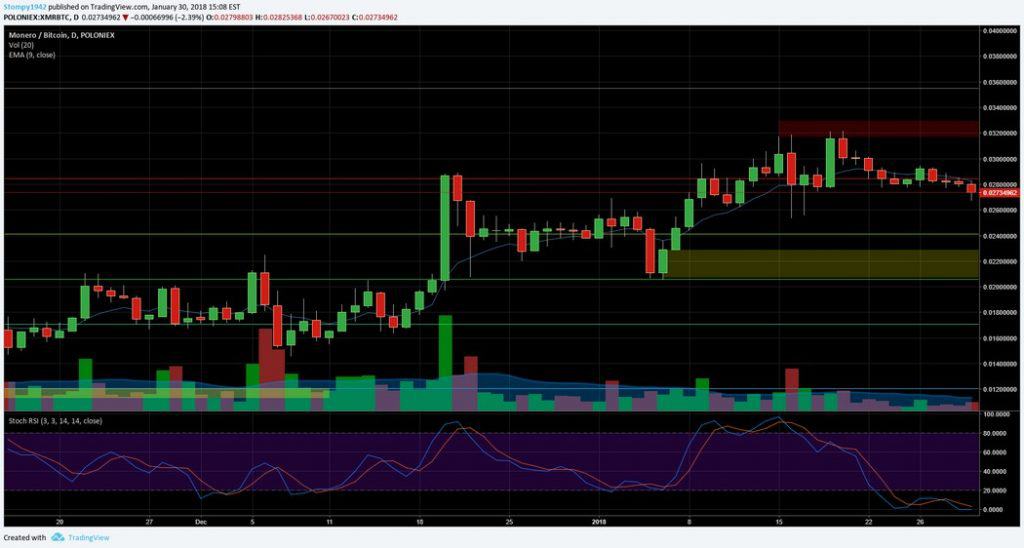 Against the dollar: Last December we saw peak prices of $1595 per coin. A correction of more than 50% since it was at the $700 level where the coin is traded is similar to the correction in Bitcoin. It seems that many Alts are following Bitcoin at least against the Dollar. Support is at $600 and the resistance range is at $ 800. 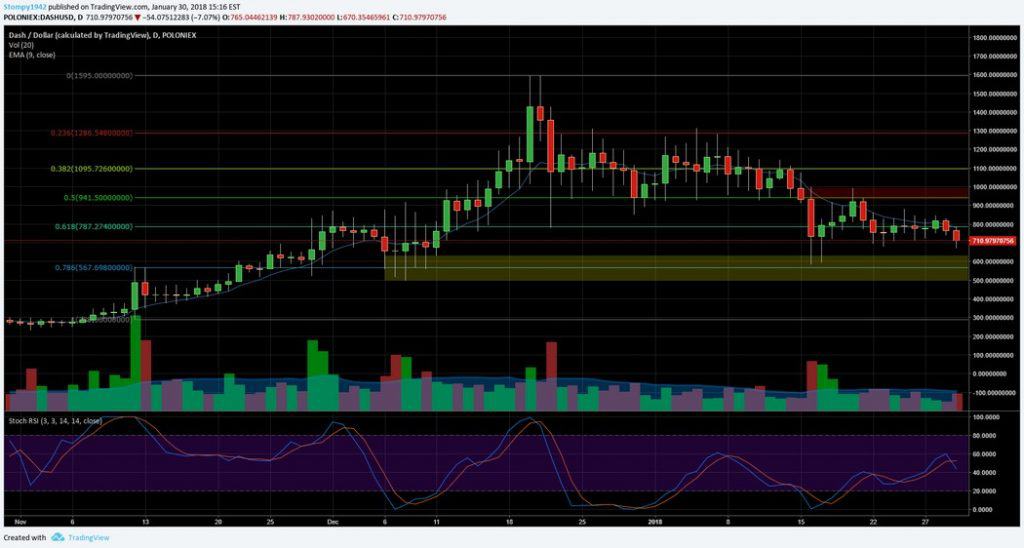 Against Bitcoin we went back to our previous analysis where we marked the support and resistance areas and they did not seem to have changed too much. It looks pretty stable in terms of the crypto trading and it is currently traded around 0.068BTC in the short term. Support around 0.06BTC and resistance 0.075BTC. 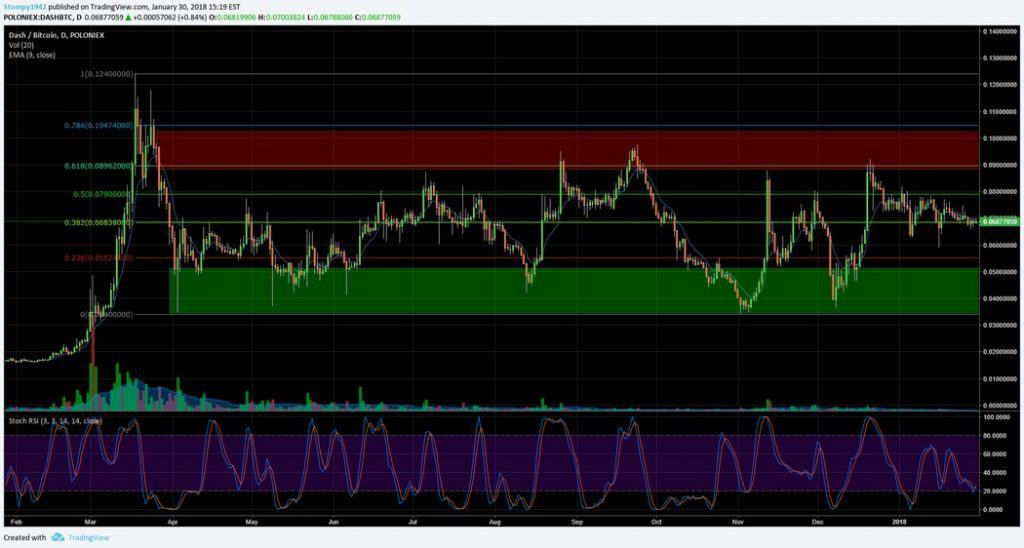 Lydian Becomes First ICO to Accepts Bytecoin as Payment Method During Its Public...
Scroll to top