After a positive week for the alternative coins, a correction came to remind us of the risks involved with market volatility. However, the sharp declines have already been halted for the moment, getting closer to the dangerous $6000 zone.

Ahead of the expected Fork of Bitcoin Cash hard fork, the price of the currency has risen by tens of percent and has attracted considerable interest from traders and investors who are eyeing the market.

In light of the upcoming decisions regarding Bitcoin ETFs and other financial instruments related to the crypto markets, a trend has recently been initiated by regulators turning to large-volume crypto exchanges that affect the Bitcoin price and other altcoins in order to try to understand the price discovery mechanism.

The end of the year is near, and November began with a positive altcoin trend. The recent price hikes brought a positive sign to the market. But if we put the prices of the coins aside and look at the development of the infrastructure, the number of companies, employees and the partnerships that are being formed, one might expect another bullish wave in the near future.

Bitcoin continues to be the dominant and leading currency in the market and begins to show signs of stability with support around $6,200. 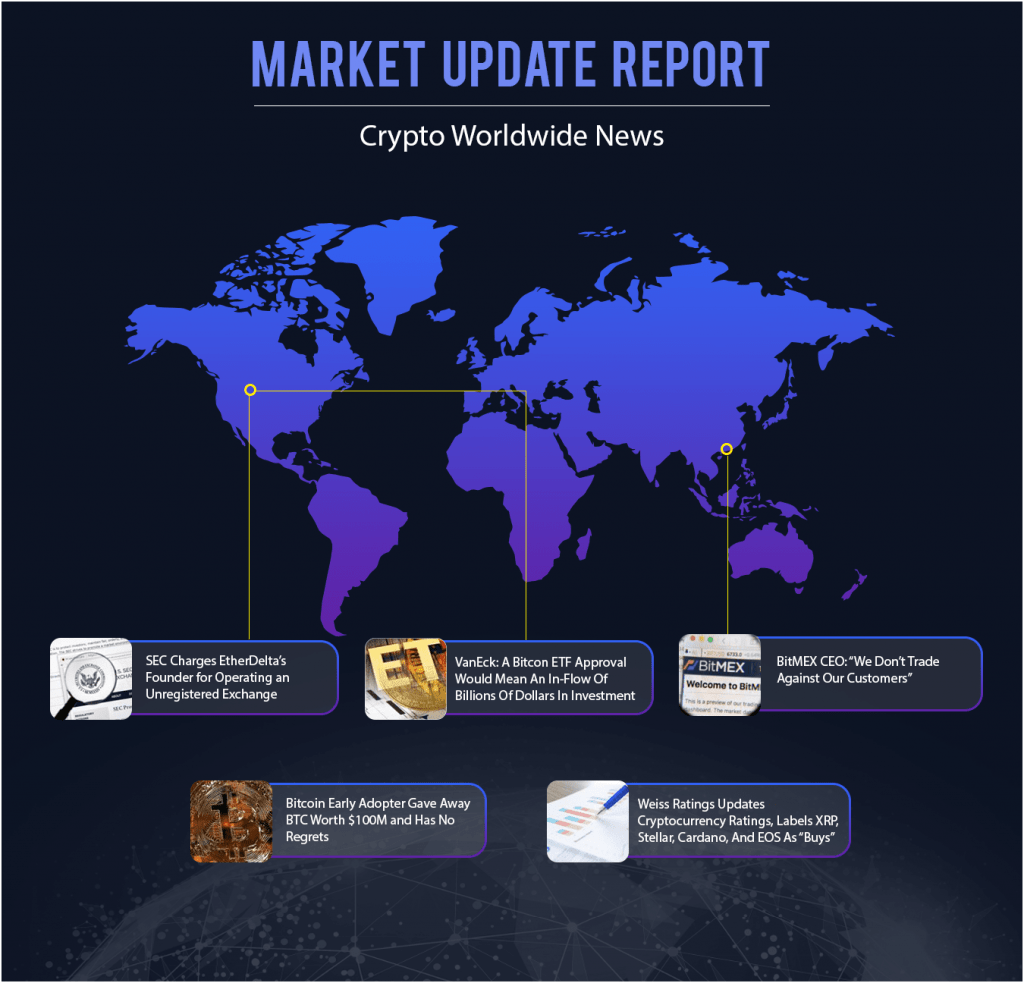 SEC Charges EtherDelta’s Founder for Operating an Unregistered Exchange. The U.S SEC has heavily fined Zachary Coburn for operating an unregistered platform that allows people to buy and sell tokens that the agency had earlier marked as “securities.”

Bitcoin Early Adopter Gave Away BTC Worth $100M: The Endless Dilemma. 15,678 BTC was given out in developer bounties by Jeff Garzik who started writing code for Bitcoin eight years ago. The developer is happy that Bitcoin is still around and doesn’t regret giving away that amount of wealth in the early days.

VanEck: A Bitcoin ETF Approval Would Mean An In-Flow Of Billions Of Dollars In Investment. Gabor Gurbacs, VanEck’s Director of Digital Assets Strategy, has reaffirmed that the crypto markets will see an influx of investment in billions of dollars, whenever the long-awaited Bitcoin ETF is approved.

Weiss Ratings Updates Cryptocurrency Ratings, Labels XRP, Stellar, Cardano, And EOS As “Buys.” The traditional asset rating company has added cryptocurrencies to their index and even gone a step further by recommending buys into XRP, XLM, ADA, and EOS which are among the top ten largest cryptocurrencies by market cap.

BitMEX CEO: “We Don’t Trade Against Our Customers.” Arthur Hayes has seemingly replied to a pseudonymous crypto entity who said that their crypto exchange cares more about money than users. Such a thought is nonsensical according to the CEO.

Against the dollar traded around $211 support still holds around $200. Resistance at $215 with the next step being built around $225.

Against Bitcoin traded around 0.032BTC support is being built around this resistance at 0.00333BTC after a failed attempt to break up the 0.034BTC.

Against the dollar trading around $540 and looking for support around $500 resistance at $650, after a sharp rise the correction has come.

Against Bitcoin traded around 0.084BTC, and resistance in this range around 0.088BTC. The peak was at 0.098BTC, and this week the graph shows there is a change of trend in light of the fork.

Against the dollar, support holds around $3. Is this the floor? Traded around $3.20, resistance in this range $3.70. If we breach this price, we’ll get a confirmation that we have touched the floor.

Against Bitcoin traded around 0.0005BTC, Support 0.00048BTC, and resistance at 0.00055BTC. Here, too, it appears that trading has balanced and we have to wait for the market to confirm that we really touched the floor.

The post Market Update Oct.13: Bears Are Back, Year-End Rally Nearby? appeared first on CryptoPotato.