After last week we reported the relative stability in the crypto market, the action was not overdue, and the volatility that characterizes the market has taken its toll.

After a correction on Wall Street, there was also a drop in the currency market, and it appears that the correlation between these markets is positive, compared to the gold market, which rises when they fall.

The dollar pegged Tether again made headlines as its value fell in some exchanges. Tether’s decline has caused a little chaos in the markets as many investors have been stressed out and transferred their Tether holdings to Bitcoin and other cryptocurrencies. In this context, one can take note of the growing trend of companies trying to raise money for the issue of alternative stable currencies competing with Tether.

Liquidity problems in the BitFinex exchange led to price differentials of around $400, and we will soon know the reasons that led to the Tetra drama that affected the entire market.

There was a downtrend this week, and it seems that most of them are approaching the floor in terms of technical analysis. It is still not entirely clear whether Bitcoin has reached the bottom.

An average bear market is around 18 months, so it is too early to say that we have passed the wave of declines and caution should be taken when entering the markets. However, one can remain optimistic that the industry is growing up and cleaning the stables. 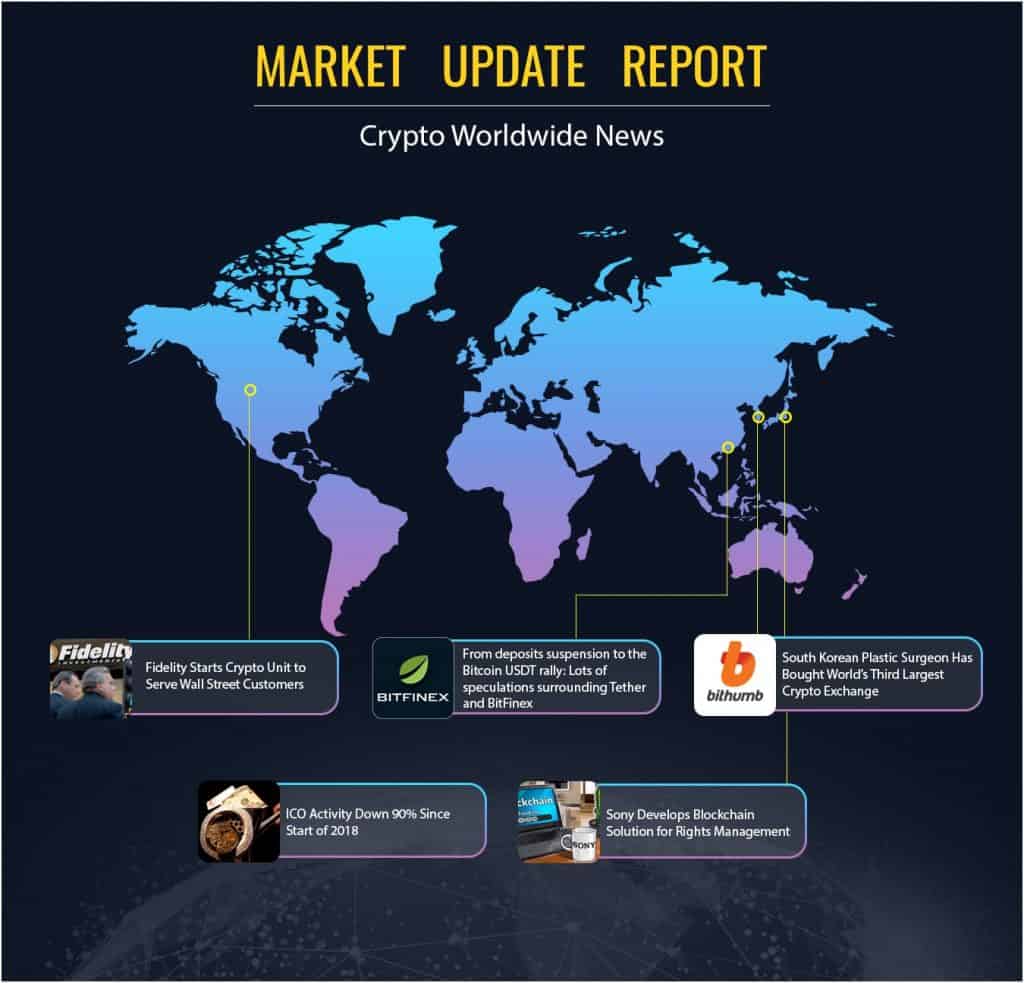 Not just ICOs: The SEC Targets Crypto Airdrops. The regulators have recently clashed with crypto startups once again after imposing fines worth $30,000 on a new project for airdropping tokens to interested investors. SEC says the airdrop is “fraudulent.”

From deposits suspension to today’s mess: All the speculations surrounding Tether and BitFinex. Hong Kong-based crypto exchange BitFinex has been in the spotlight for all the wrong reasons. Including manipulating the price of the stablecoin Tether. Traders on the exchange may have recouped profits when BTC went as high as $7900 on the exchange yesterday.

Fidelity just made it easier for hedge funds and other pros to invest in cryptocurrencies. Fidelity Investments, the fifth largest asset manager in the world, has announced that it will launch a new platform that attracts institutional investors to cryptocurrencies.

Sony Develops Blockchain Solution for Rights Management With Internal Partnerships. The multinational technology company is trying out a new industry with reports emerging that they are developing a blockchain-powered extension of its digital rights management system.

ICO Activity Down 90% Since the Start of 2018. ICOs are no longer raising as much funding as they used to at the start of the year, as a study by Autonomous research revealed that less than $300 million was raised in the whole of September.

A volatile week that saw support in the areas of $6,100 followed by a sharp rise to $6700, influenced by recent market events. The resistance appears to be above $6,000, giving confidence to investors. The exchange traded at around $6,438.

Against Bitcoin trading around 0.031BTC the support holds around 0.03BTC and still trading in this support range as well as the floor we have seen since December seems to have the graph to accumulate a little more time and show stability to the resistance market around 0.037BTC.

Against the dollar, the rate is based on support around $430 traded at $470. As of the writing of the update, it is not clear whether this is the floor and we did not see enough trading volume. If we look back, $300 appears in the graph as a table. In this range at $500.

Against Bitcoin, it traded around 0.069BTC resistance at 0.075BTC support in this range around 0.068BTC a fragile graph technically does not look good, or we are on the floor.

Against the dollar trading around $3.44 resistance at $3.80 support at $2.90 seems to be stabilizing recently and volatility has calmed down. Can we go lower from here?

Against Bitcoin traded around 0.0005BTC not far from the floor we have seen since August around 0.0004BTC it seems that the trade has calmed down and the bull is starting to level resistance in this range at 0.0006BTC.

Against the dollar, a weekly chart traded around $0.11 support around $0.10 holds resistance at $0.14 in this range the peak was at the beginning of the year $2.29 it seems the currency crashed but found a floor and stabilized.

Against Bitcoin traded around 1738SAT support around 1500SAT in this resistance range at 2000SAT since July holds volatility has calmed down. Have we reached the bottom?