While Bitcoin is stabilizing around $6400, the Altcoins market enjoys significant volatility. Experience shows that Bitcoin’s stability predicts volatility in the other cryptocurrencies, and this pattern was further strengthened this week.

One of the highlights of the week was Ravencoin, which rose around 300% alongside high trading volume. Beyond that, it may be that the return of the green color to some alternative coins marks the beginning of another so-called “Altcoin season.”

Although the public interest in the field is not at its peak, the crypto industry is expanding, and it seems that the market is emerging over time. The Ethereum community is growing and is looking forward to the Devcon event at the beginning of November.

The stablecoins trend continues to gather momentum, and many projects are fundraising by the idea that, in the near future, they will provide stability to the volatile markets. While ICOs were the hype for 2017, will stable coins be the hype of 2018?

Satoshi Nakamoto’s “White Paper” will soon celebrate a decade that demonstrates how genius spreads its ripples quickly and permeates the general public. Meanwhile, BAKKT’s futures trading will also open its doors to Crypto.

Nevertheless, we reiterate that the market is still under correction conditions and that a positive week does not indicate a change in the long-term trend. Also, trading volumes are very low compared to all-time highs and altcoins that have shown an upward trend, are not of the biggest ones (such as Ethereum, Litecoin, and Monero), whose rise might hint at a real change in trend. 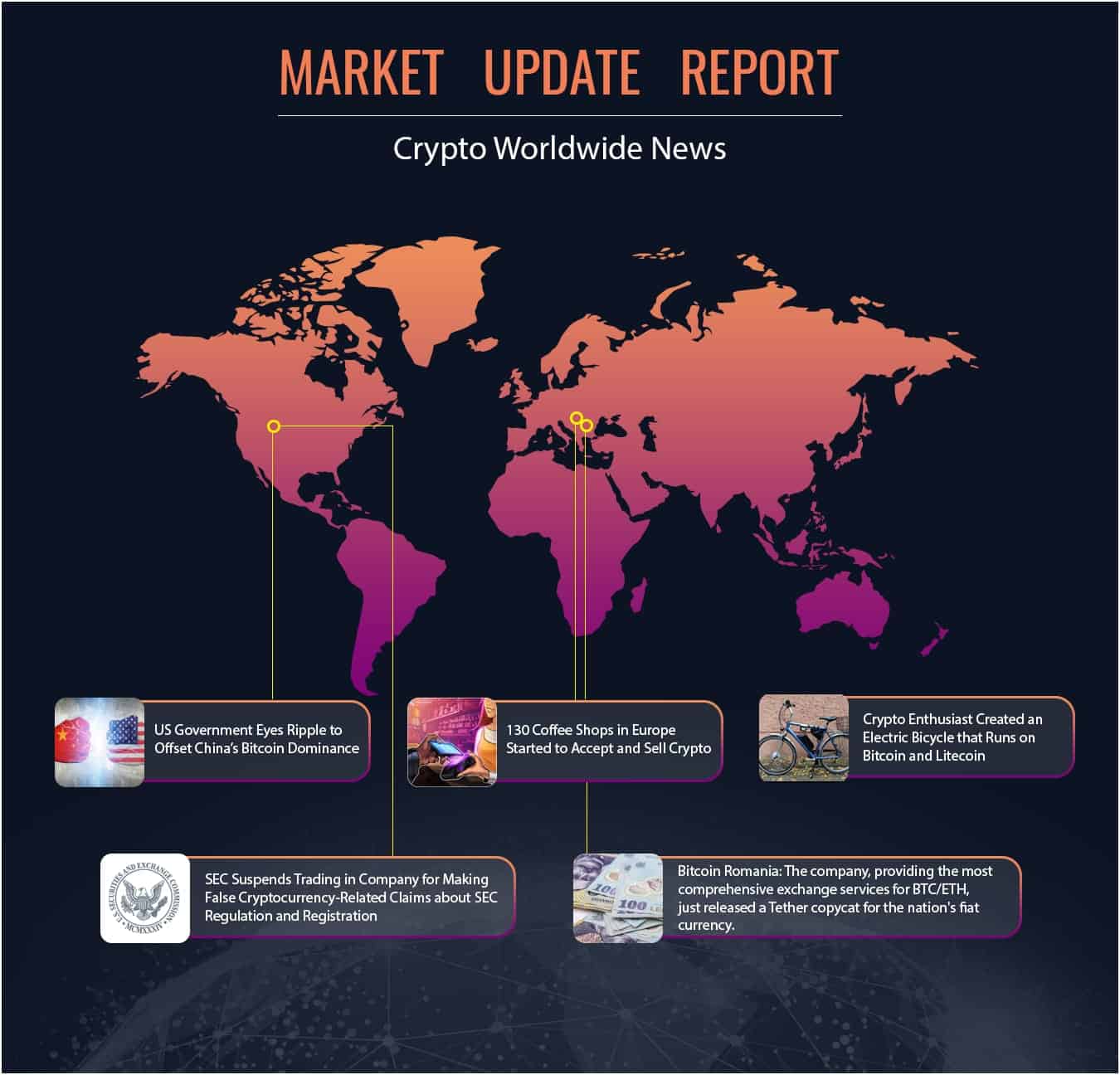 Five things Paul Krugman gets wrong about crypto. Economist and Nobel laureate Paul Krugman just revealed his lack of knowledge about crypto and blockchain in his NYT article. The public figure had made similar errors when the Internet came around.

130 Coffee Shops in Europe Started to Accept and Sell Crypto. A tech startup known as Cyclebit has created a solution that opened the way for Nostrum – a network of 130 coffee shops throughout Spain to start accepting Bitcoin payments.

US Government Eyes Ripple to Offset China’s Bitcoin Dominance. The US administration has expressed real concern about how China is dominating Bitcoin mining operations and may have to turn to US-based Ripple in other to gain the upper hand on the big stage.

SEC Suspends Trading in Company for Making False Cryptocurrency-Related Claims. Nevada-based American Retail Group, Inc. was popularly known as Simex, has been hit with a ban by the U.S regulators for stating in its press release that the SEC backs them.

The Most Mysterious Company in Blockchain to Launch at Devcon. Over 100 miles dedicated to building a Blockchain sandbox will be unveiled on November first, during the Blockchains Global Launch Event taking place in Prague.

A New Tether Shows Up in Romania. Bitcoin Romania, the company, providing the most comprehensive exchange services for BTC and ETH in the country, just released a Tether copycat for the nation’s fiat currency.

Crypto Enthusiast Created an Electric Bicycle that Runs on Bitcoin and Litecoin. In what may be described as a first, a crypto enthusiast, Matthias Steinig has invented an electric bicycle which demonstrates Bitcoin and Litecoin as viable payment options in the real world.

BTC had reached the end of the triangle (marked with red). It is now on the resistance built over the past two weeks around $6500. Support lies around $6200. The market seems ‘safe’ as long as around the $6000 area. This is in spite of the recent events we have had around Tether and BitFinex.

Against the dollar, the support around $190 holds. Resistance lies around $225 in this short-term range. It is still not clear if the correction had ended. Also, the price of ETH a year ago was $ 50 higher than today’s price.

Against Bitcoin, ETH seems to be supported around 0.03BTC. Resistance lies around 0.037BTC. Traded around 0.031BTC. In case of a Bitcoin dump, the ETH market might also panic sell.

Against the dollar, BCH has a solid week around $440. Currently traded right above support level, with major support area around $250 (on the daily chart). Resistance lies around the $480.

Against Bitcoin, traded around the fragile support of 0.068BTC, which is also the support of the recent decline. Resistance in this range lies at 0.075BTC. Probably not the floor yet.

Against the dollar, Zcash seems to have completed a continuous correction. A Head & Shoulders pattern at the peak and from there corrected till achieved floor target as indicated in the previous analysis (red colored arrow). Support lies at $100, resistance in this range lies at $ 140.

In contrast to Bitcoin, here too, the target of the correction was completed with a floor at 0.016 BTC where the current support also stands. Resistance lies at 0.02BTC.

Also, it should be noted that a fork is planned soon so that anonymous operations will require less computing power. It can be assumed that a successful upgrade will also affect the Zcash price.

The Death of Hype, Amara’s Law and the Crypto-Anarchist Dream VanEck Says Bitcoin ETF Concerns ‘Resolved’ at Meeting With SEC
Scroll to top