After a particularly volatile year, we have experienced a relatively stable week. Certainly the most stable it’s been since its beginning. Can we say that the market is stabilizing? After a prolonged bear market, the market has formed with the opinion that the bottom is already here. However, do not be misled by the apparent stability because crypto markets are unpredictable and are known for their high volatility. So, it’s quite possible that after hitting the floor we could fall through into the basement because another collapse is always an option placed on the table.

Meanwhile, the US Securities and Exchange Commission (SEC) has set Nov. 5 as the deadline for reviewing the ETF requests on its desk.

Venezuela issued a statement to residents that payment for issuing a passport must be paid in the national digital currency – Petro.

In the Alternative coins sector, it is relatively stable – if you take out several Alt’s such as XRP, which fell by 15% last week. It seems that after the hype around XRP the market chose to release it after its peak.

Collaboration with BitTorrent boosted TRON cryptocurrency, which rose around 15% this week.

The highlight of the week from the Top 100 was Maker (MKR), which rose around 55% and rose to 22nd place on the list.

In addition, we noticed that the Alts below the top 100 have enjoyed a better yield in the past week, for example, Digitex Futures, which exceeded 100%.

The crypto market size is around $220 billion, and the dominance is 52.3 percent for Batecken, but it has not changed much since last week. 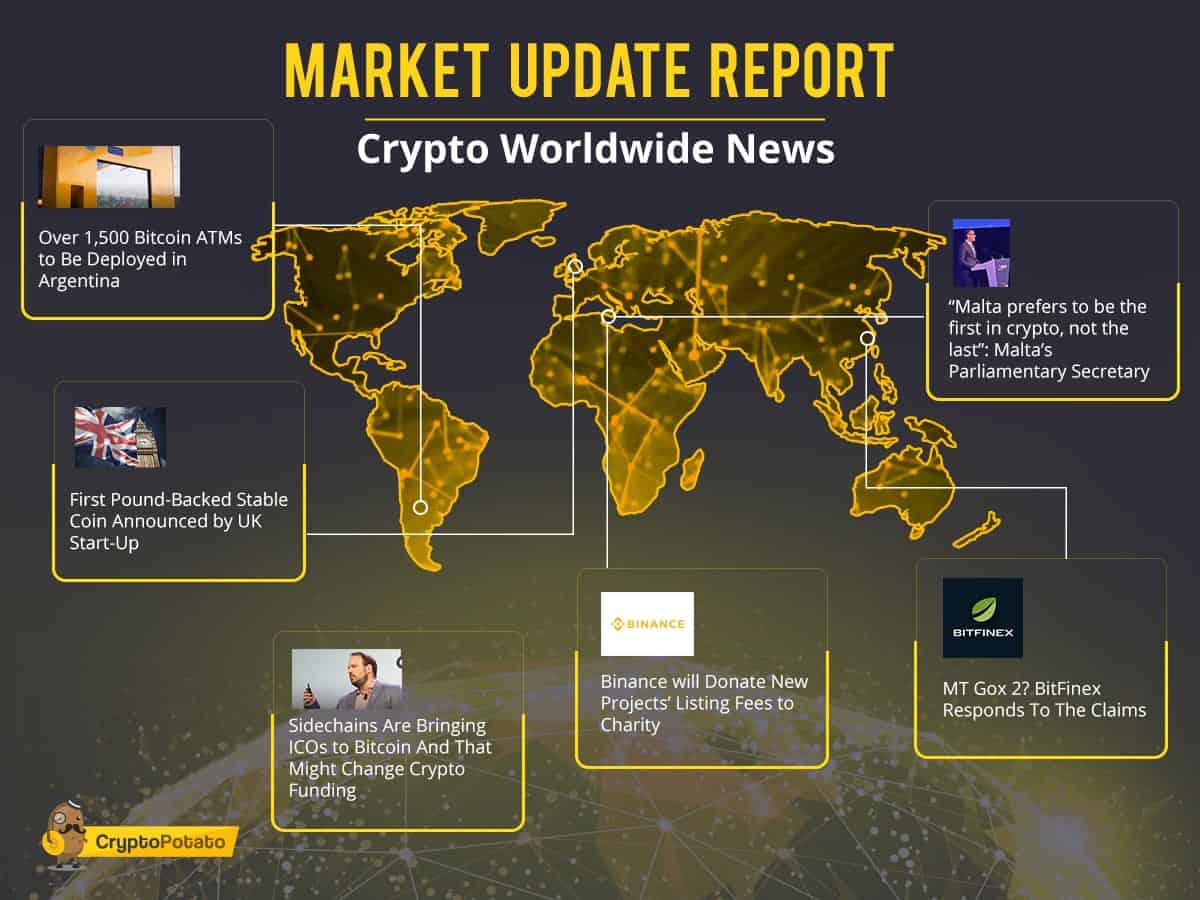 Over 1,500 Bitcoin ATMs to Be Deployed in Argentina. Representatives from Athena Bitcoin and Odyssey Group have confirmed that 1500+ new Bitcoin ATMs will be installed at strategic locations between now and the end of 2019 even though the country is in an economic crisis.

First Pound-Backed Stable Coin Announced by UK Start-Up. London Blockchain Exchange (LBX) announced during the week that it will launch LBXPeg, a stablecoin that will be backed by the Pound Sterling and built on the Ethereum Blockchain.

“Malta prefers to be the first in crypto, not the last”: Malta’s Parliamentary Secretary. Other nations can continue to live in the dark about cryptocurrencies and Blockchain but Silvio Schembri, the parliamentary secretary of Malta, has said they will continue to promote it.

MT Gox 2? BitFinex Responds To The Claims. Medium posts suggesting that the Hong Kong-based exchange has become insolvent and no longer allowed Fiat withdrawals are ‘baseless’ according to an official response.

Sidechains Are Bringing ICOs to Bitcoin, And That Might Change Crypto Funding. Startups might just start preparing for a new way of raising ICO funds after reports revealed that the possibility of launching crypto projects on the Bitcoin Blockchain would happen at the end of the year.

Binance will Donate New Projects’ Listing Fees to Charity. The top crypto exchange has shown a heart of gold by agreeing to donate the money generated from new project listings to their charity arm, Binance Charity Foundation.

This week’s support at around $6,100 held hold, and it seems that a break below 6K will only scare the market that feels manipulative at this time, trading around $6,590 resistance at $7K remains support in this range around $6,350. 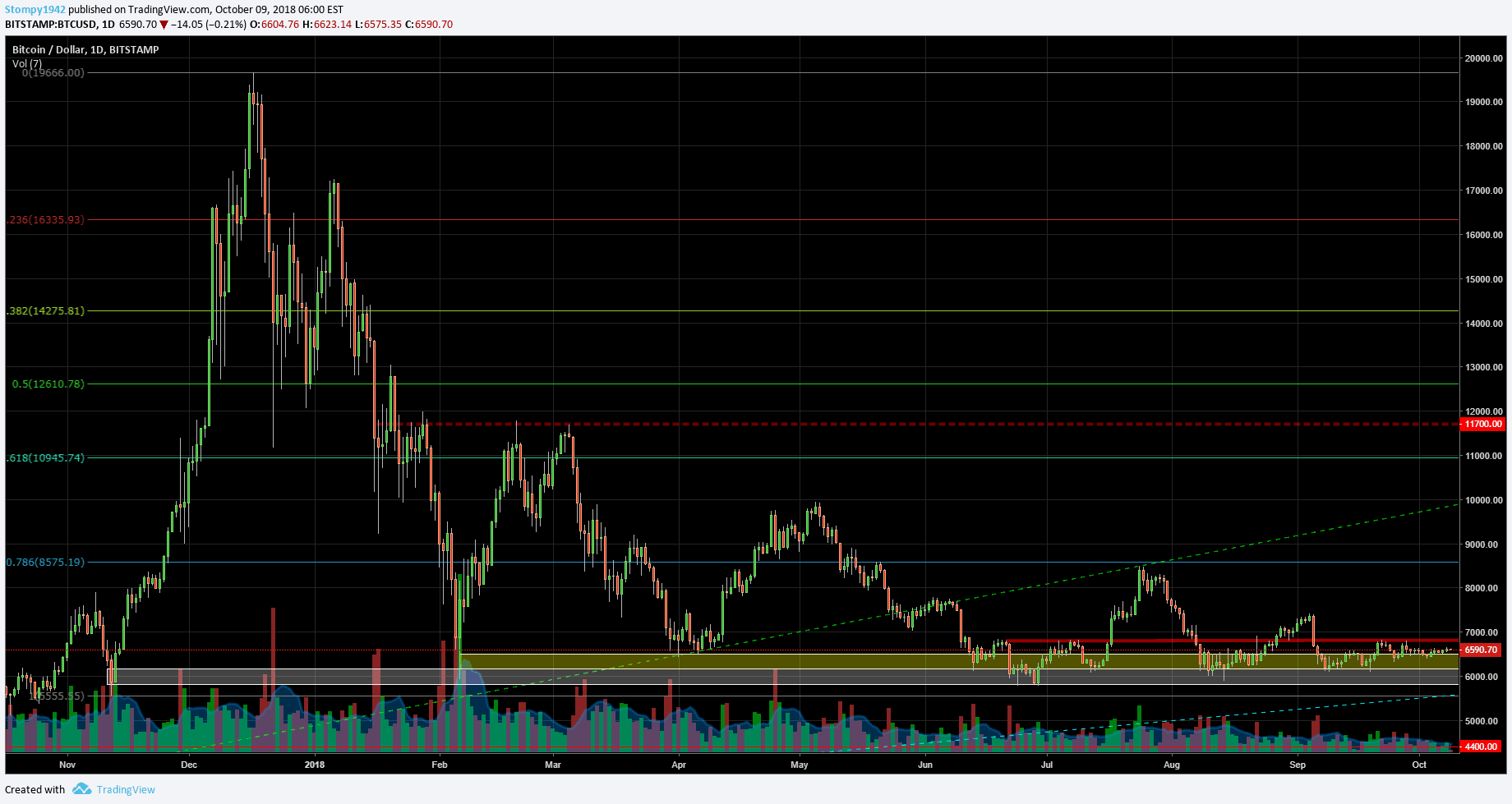 Against the dollar traded around $228 support for $200 resistance at $250 volume trading increased from the beginning of September in these areas seems like an attempt to support the rate at around $200. 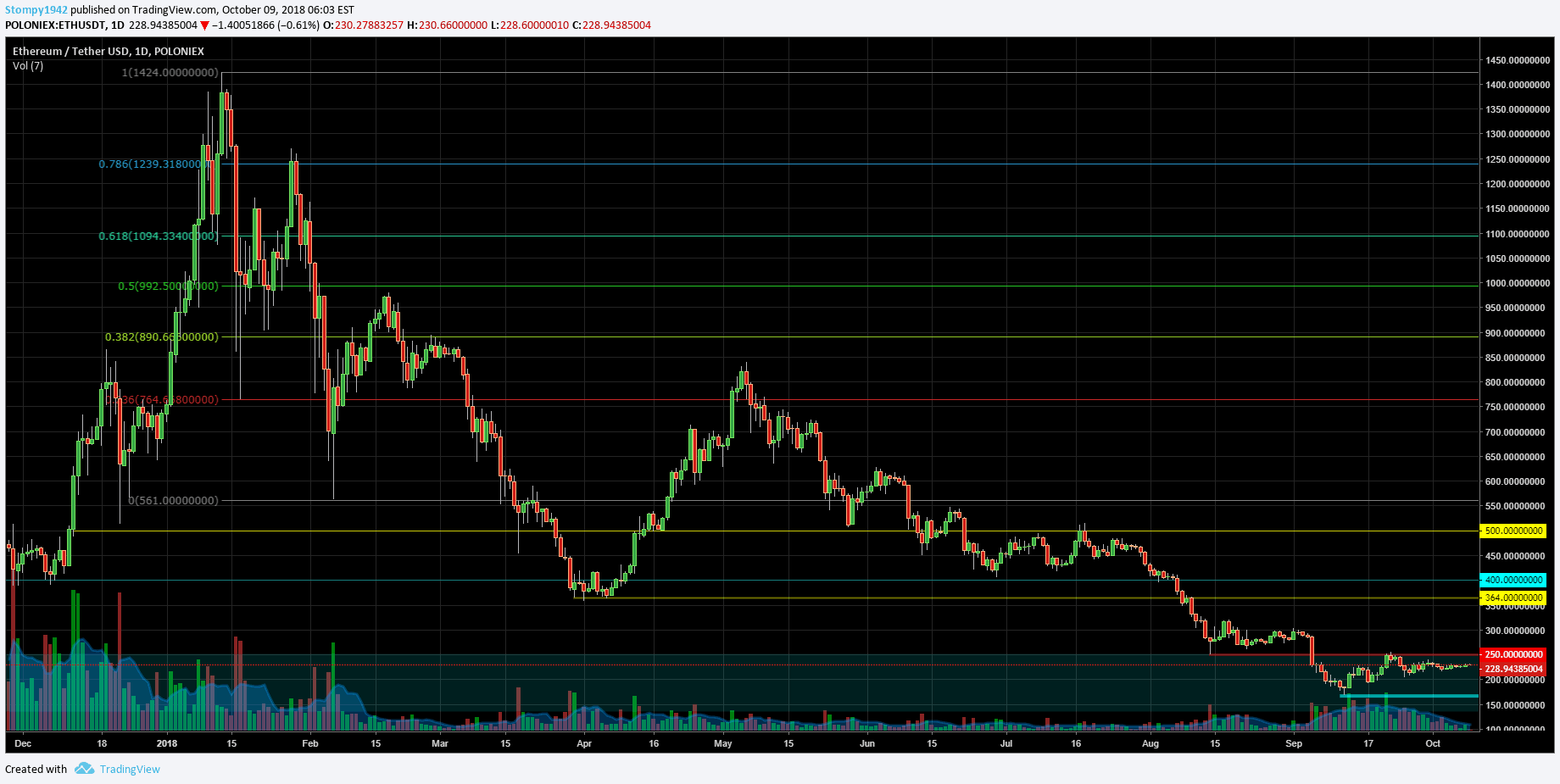 Against Bitcoin, this week’s rally around 0.034BTC resistance at 0.037 BTC support in this range around 0.032BTC seems fairly stable this week. 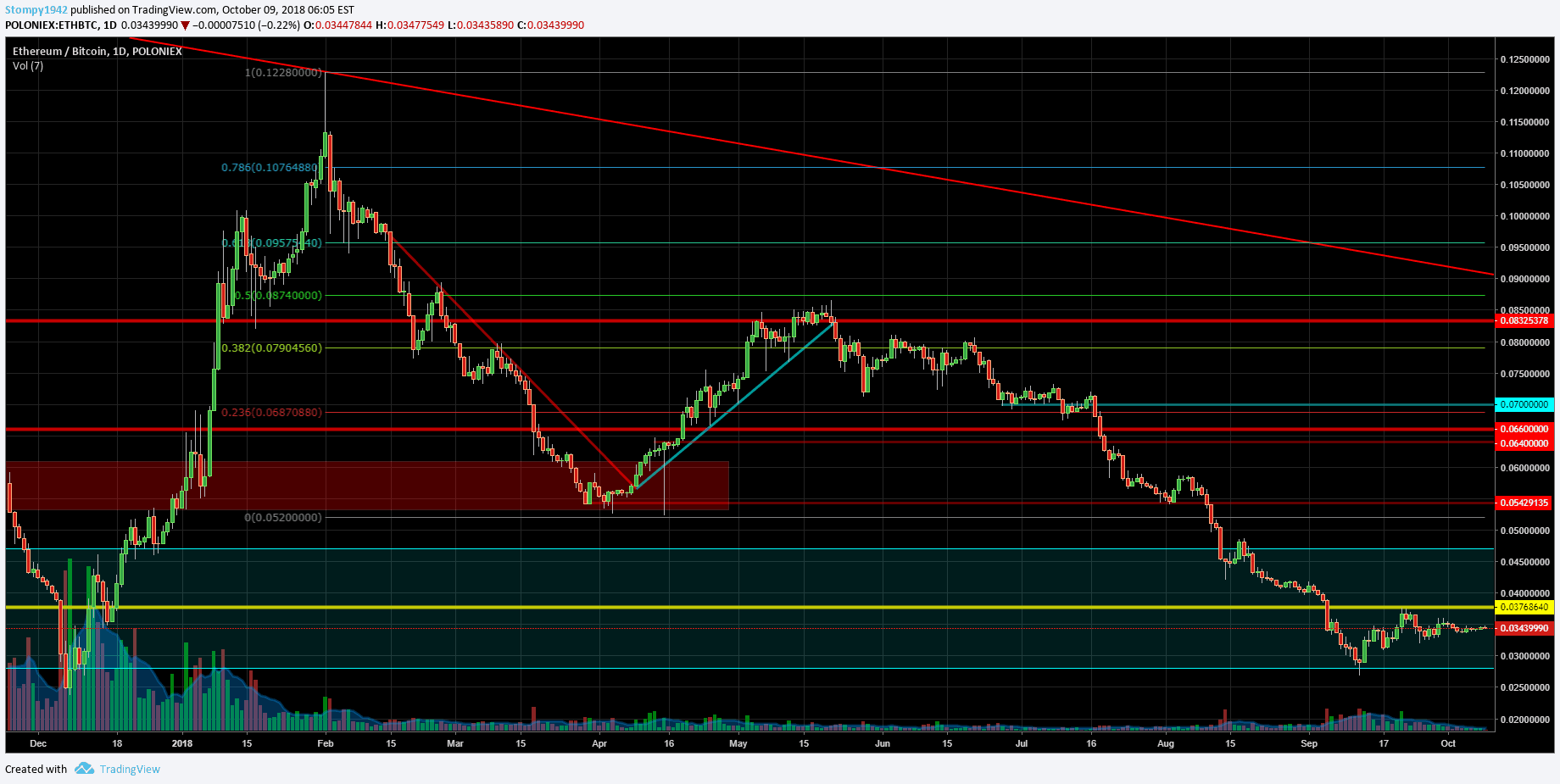 Against the dollar traded around $524, it seems that even here was a fairly stable week the resistance remains at $600, and support is being built in this range around $500. 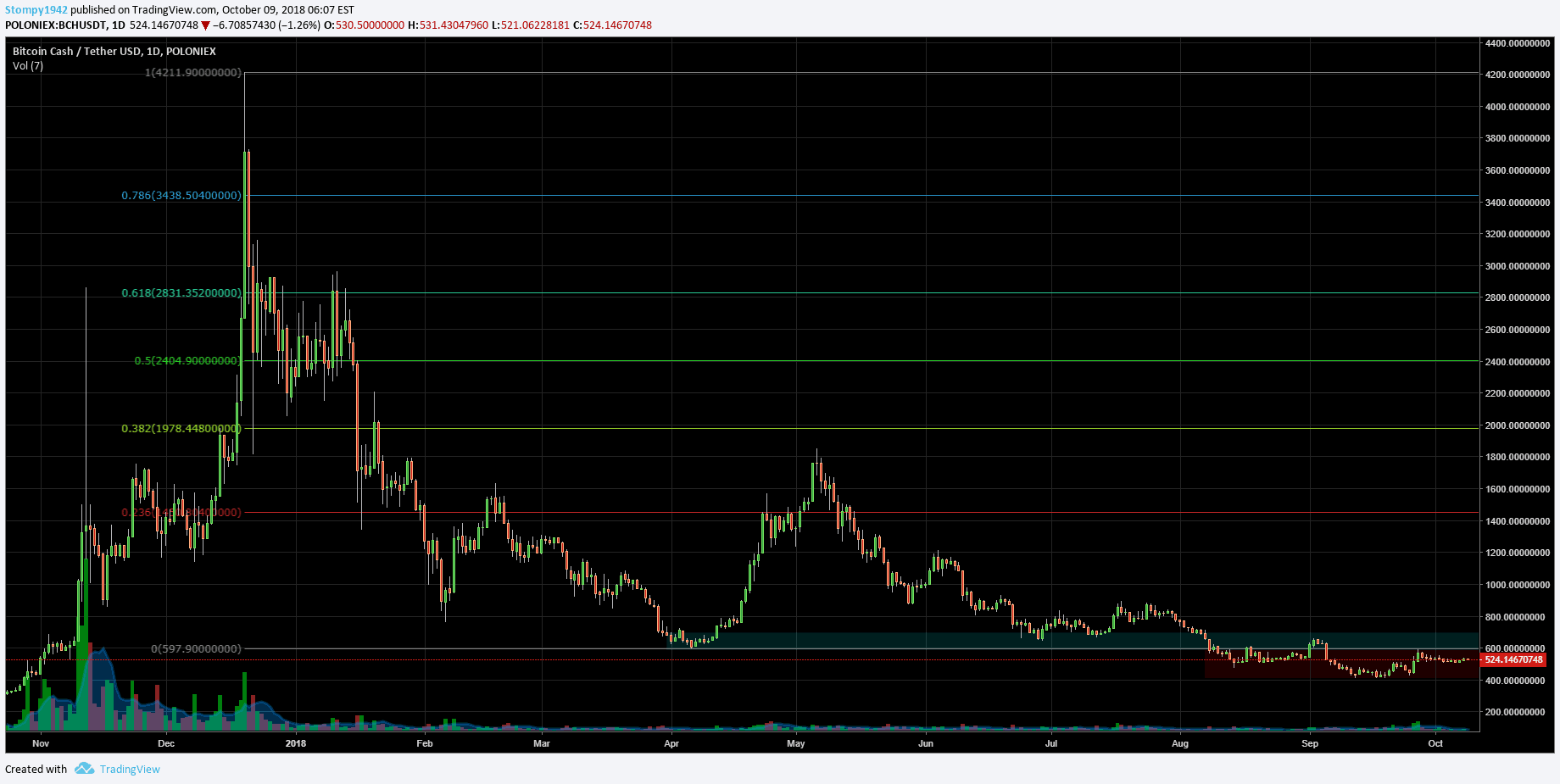 Against the Bitcoin, the upward correction of the falling trend has moderated this week, and it seems that the rate found support in this range around 0.076BTC resistance at 0.085BTC traded around 0.078BTC. 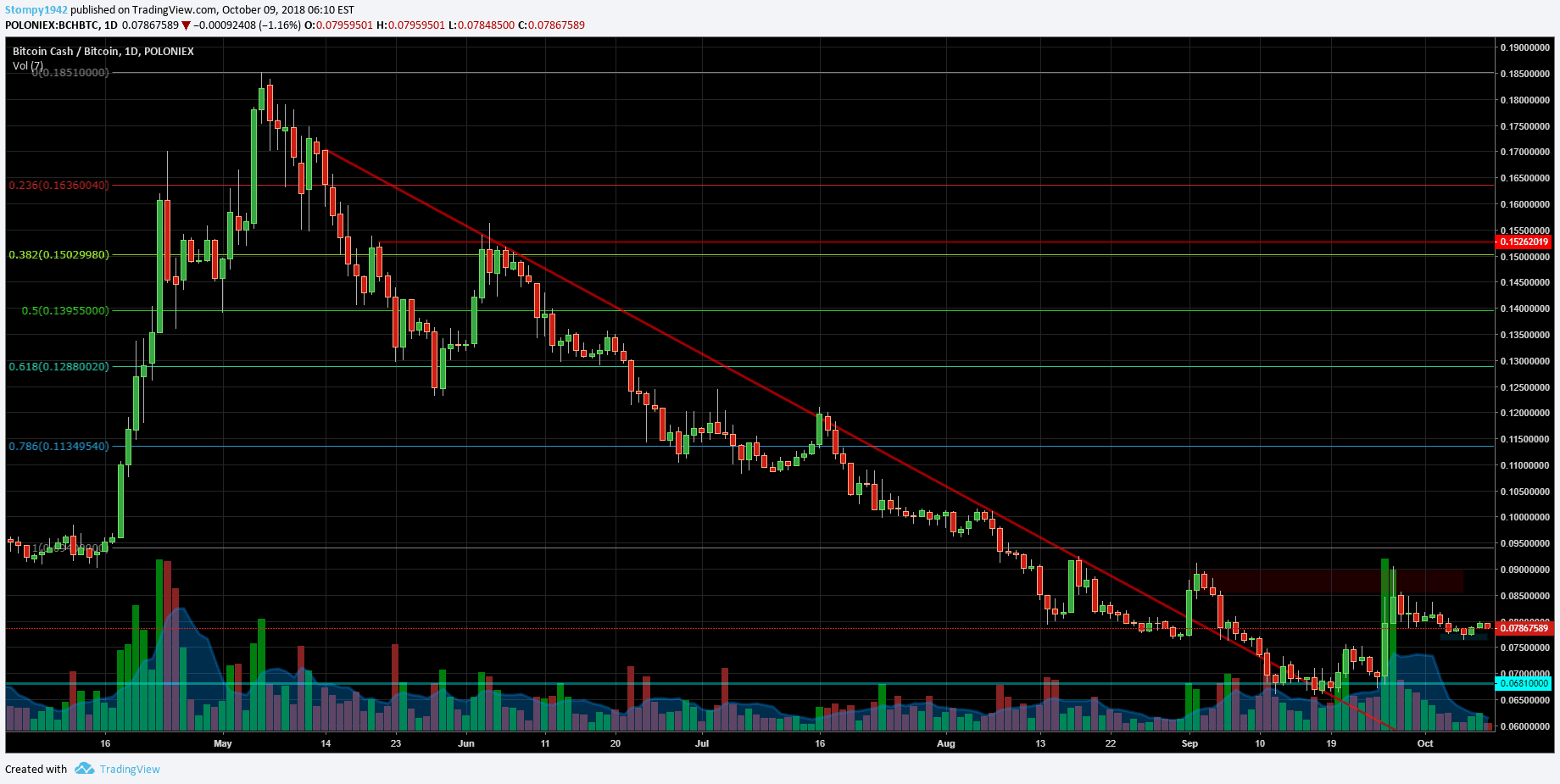 Against the dollar traded around 17-18 cents resistance around 18 cents in this range support at 15 cents seems to support the test. Is there a new floor? 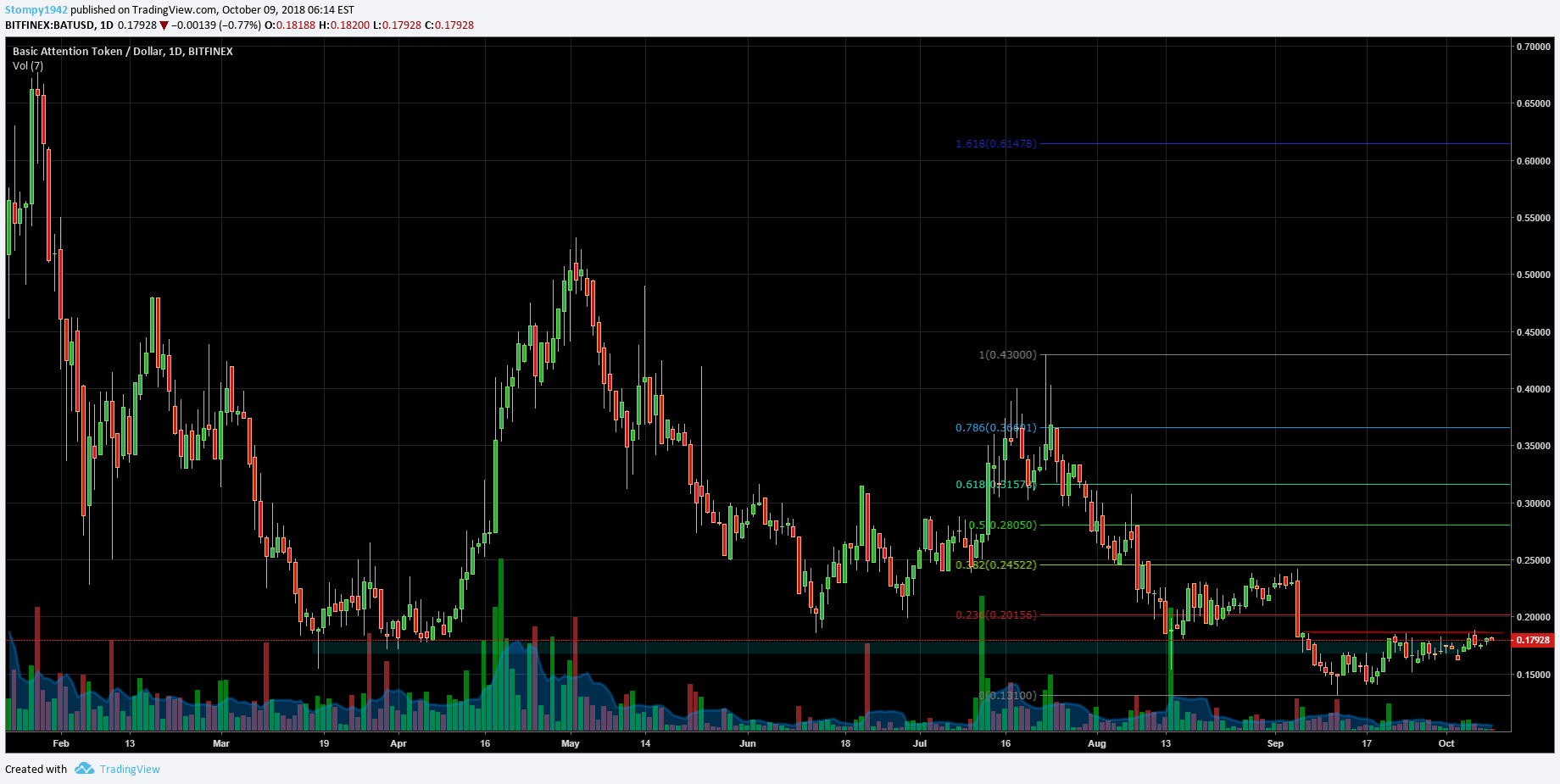 In contrast to Bitcoin, it seems that it has found support in this range at around 2,235 Satoshi. Similar to the support from April, it is important to take into account that they can test this support again if it has strength traded around 2,700 resistance stochastics in this range in these areas. 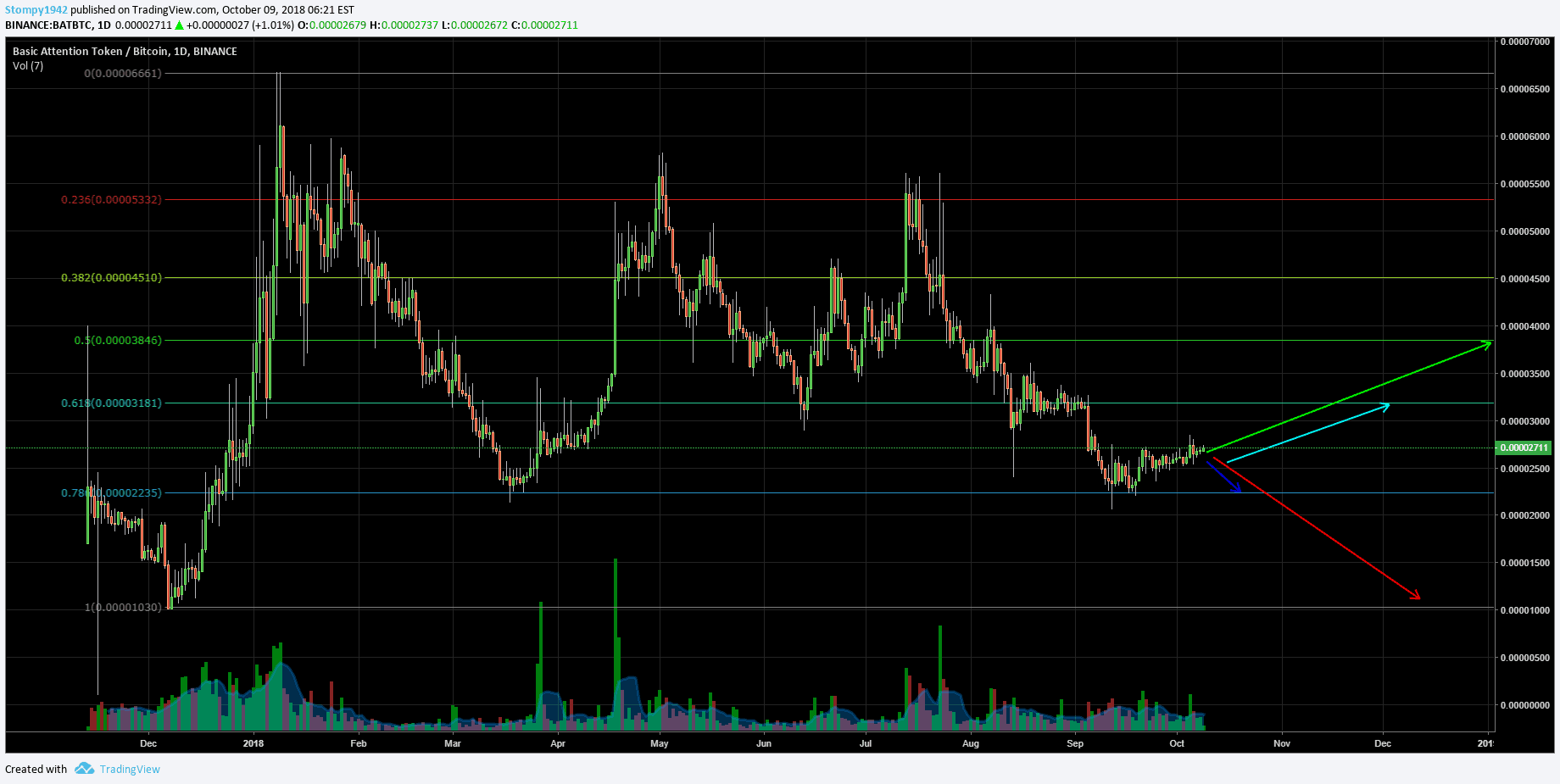 Against the dollar from a peak of $194 in January to a low of $15 where the floor was found, and we are not far away from around $18.2 resistance at $20 in this range it seems the crash has calmed down a bit. 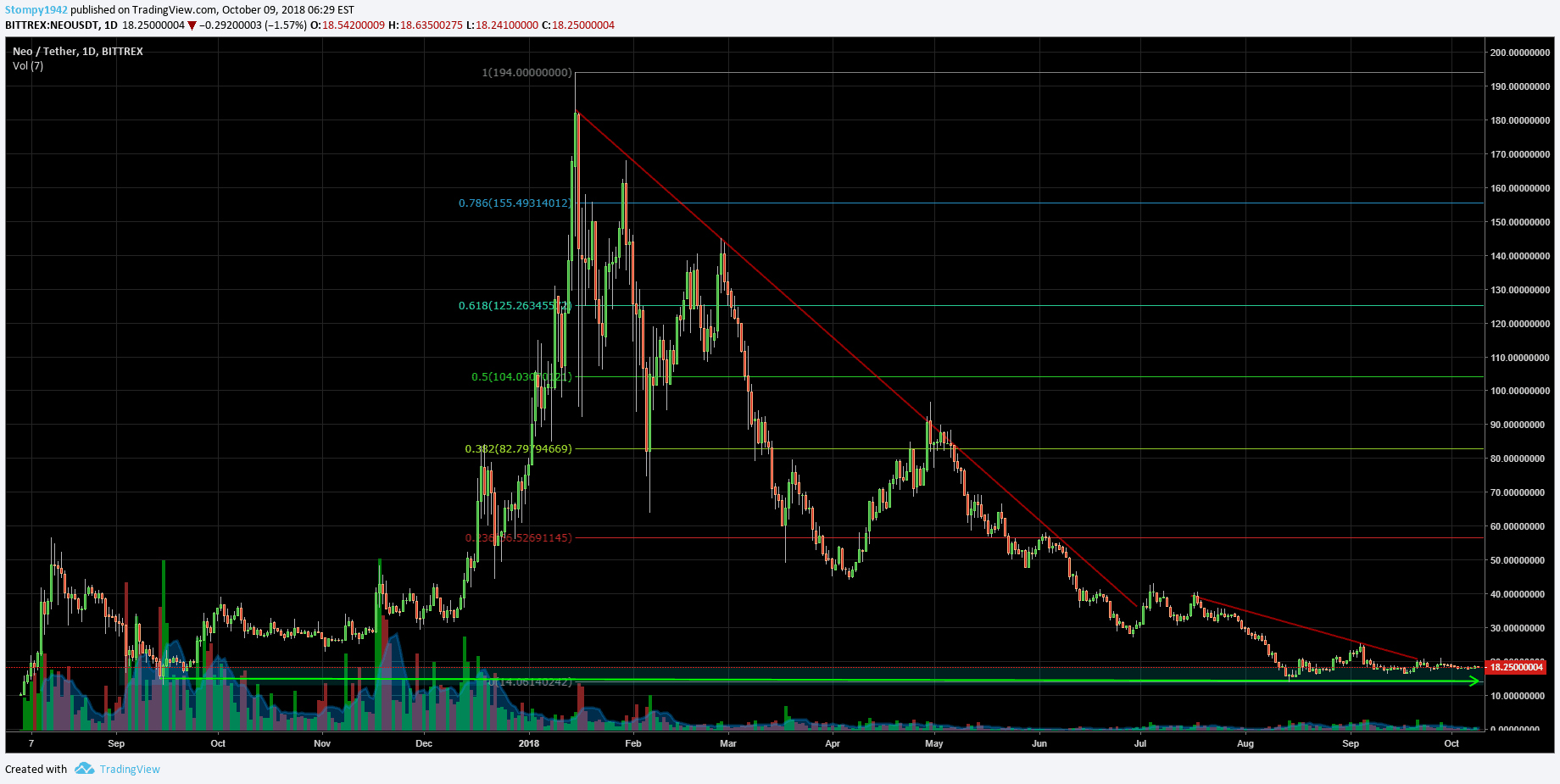 Against the Bitcoin, there seems to be a floor in this range around 0.0025BTC as opposed to trading against the dollar. It seems that we did not return to the low of May-June 2017. Traded around 0.0027BTC resistance at 0.03BTC 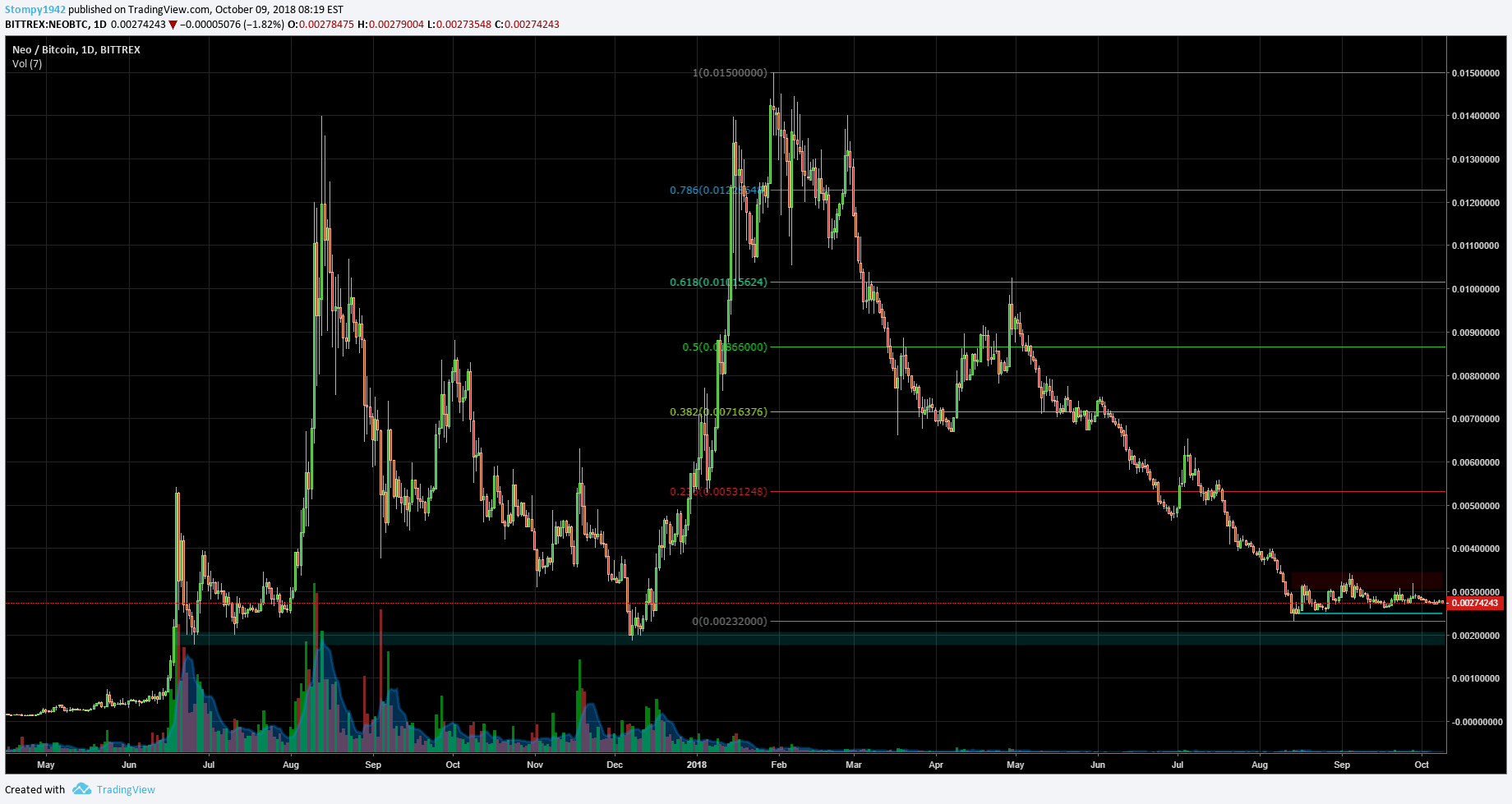 The Great Ripple Debate: FinCEN Ruling Labels XRP a Currency, Not a Security

IBM Open to Collaboration with Facebook on Libra Project

Why Security Tokens Are Great Opportunity For Celebrities Fascinated By Crypto

Ethereum Price Analysis: ETH Slips Below $180 But Bulls May Be Plotting a Comeback

What Is Coin Selection and Why Does It Matter? Bitcoin Featured in Children’s Goosebumps Book
Scroll to top