This week we have seen a continuation of the bear market from the recent months, but the demand seems to stop further declines (for now) in the range around 6,500$, which is a strong support. 10,000 Bitcoins found their way out from MTGOX’s wallet six days ago and has probably affected the market and was the cause for the quick drop from the 7300$ range to $6,600. The entire market cap is around 250$ billion and seems to be struggling not to shrink even more. Bitcoin dominance is at 44%, down 1% since last week. The trading volume is also on a downward trend and stands at an average of 10 billion USD per day.
So, where was the action during last week? Correct, the altcoins: XVG, one of the most interesting coins of the past week, stands out during times of a bear market like we have now. Also, it is impossible not to pay attention to ONT, which rose 80% against the dollar last week. Since ONT’s ICO last October, it has yielded 60 times return on investment in Ethereum, which could bring another wave of potential investors into the crypto markets.

Bitcoin Payments Accepted By Hotels In Russia During World’s Biggest Sport Event: Apartments Malina has teamed up with the online payment system, Free-Kassa, to allow users to purchase rooms with cryptocurrencies. A total of four matches will be played in Kaliningrad on Jun. 16, 22, 25 and 28.

Ripple Announce Partnership With International Central Bank Network: At the Bangkok French Fair, a representative from Ripple said that they are working with between 40 and 50 central banks, including the bank of Thailand.

Mark Karpelès, ex-CEO of bankrupt MtGox: Ask me anything! Mark Karpeles hosted an Ask Me Anything on Reddit that you can see here.

Institutional investors incoming? Sec formally considering bitcoin ETFs: In the United States, the SEC has officially initiated a formal inquiry into the possibility of allowing Bitcoin exchange-traded funds (ETFs) via a change to one or more of its rules.

Bitcoin or other crypto trading NOT BANNED in India – Exchanges like Unocoin & Zebpay release statements: Despite popular belief, crypto exchanges are not banned in India, according to statements made by Uno Coin and Zebpay.

Soros, Rothschild, and Big Institutional Investors are Entering Bitcoin Market: The Soros Fund Management venture internally approved the trading of virtual coins in the past few months, while Rothchilds have been trading crypto through GBTC.

CoinGate and PrestaShop partnership to allow payments in Bitcoin, Ethereum, Ripple , Litecoin and many others: CoinGate, the Lithuania-based blockchain payment gateway has collaborated with an open-source e-commerce platform, PrestaShop.

Traded around $ 6700 when support is in the short-term range is around $ 6,500 and mid-term resistance lies around $ 7500. The long-term uptrend line from July 2017 is marked in green in the followin chart. Support areas are marked in yellow and in gray mark – support since last November. Check out our daily Bitcoin analysis. 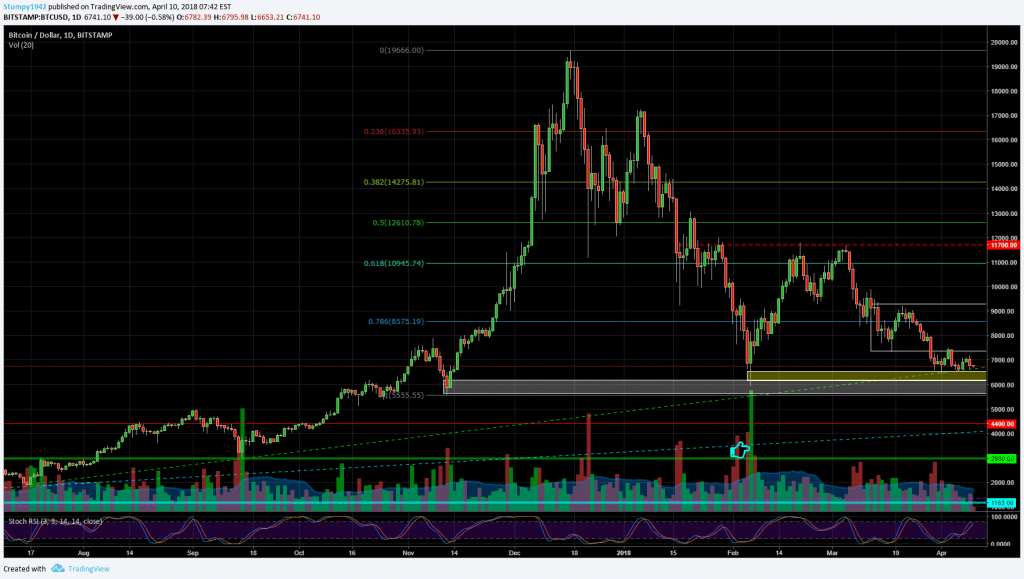 Against USD, The declines were slowed last week and it is now traded around $ 390-400, resistance at this range is around 440$. 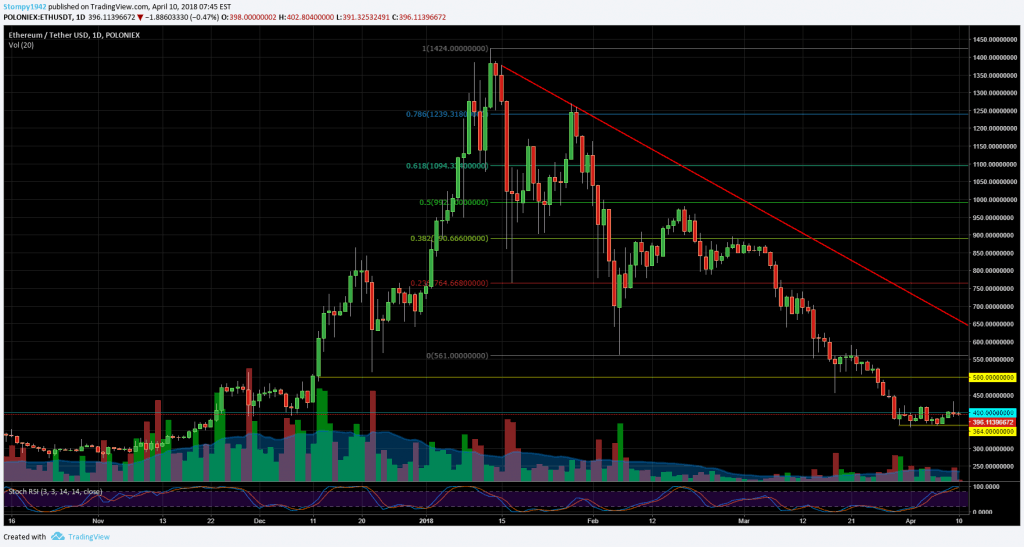 Against Bitcoin, Ethereum even climbed up a little during last week. It is traded around 0.058BTC. Resistance at this range is around 0.06 BTC and support can be found around 0.055BTC. 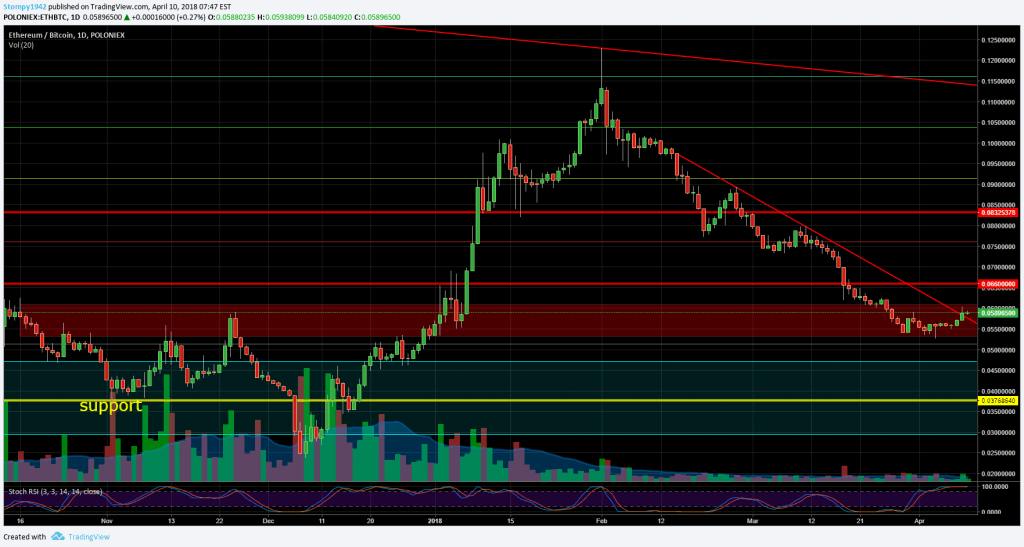 Against the dollar, volatility and declines have eased during the last week. Traded around $ 17, these zones also support zone. Resistance at $ 200. Is this the floor? 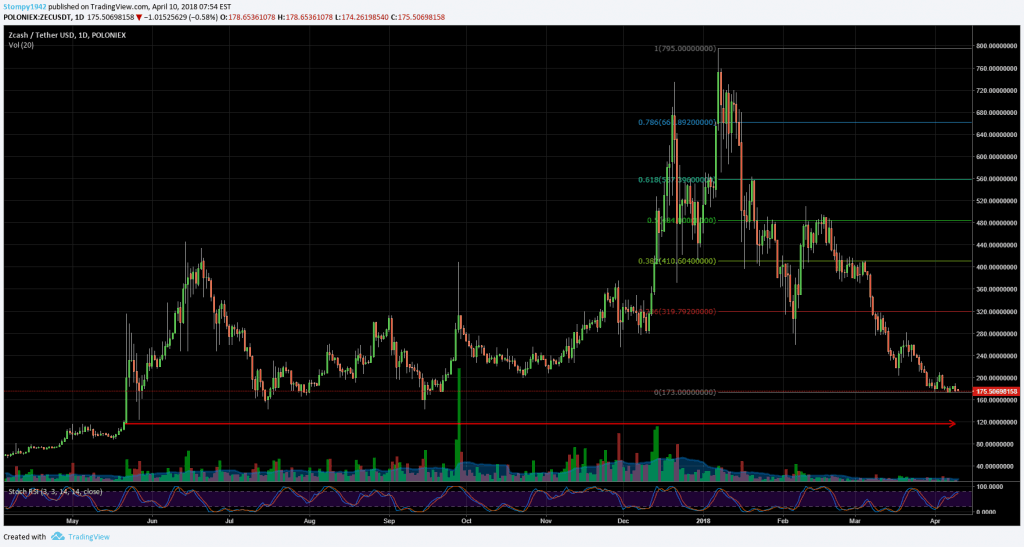 Against Bitcoin, the downward trend continues but is no longer a large percentage drop. Support is around 0.025BTC. Currently traded not far, around 0.026BTC, resistance lies at 0.03 BTC. 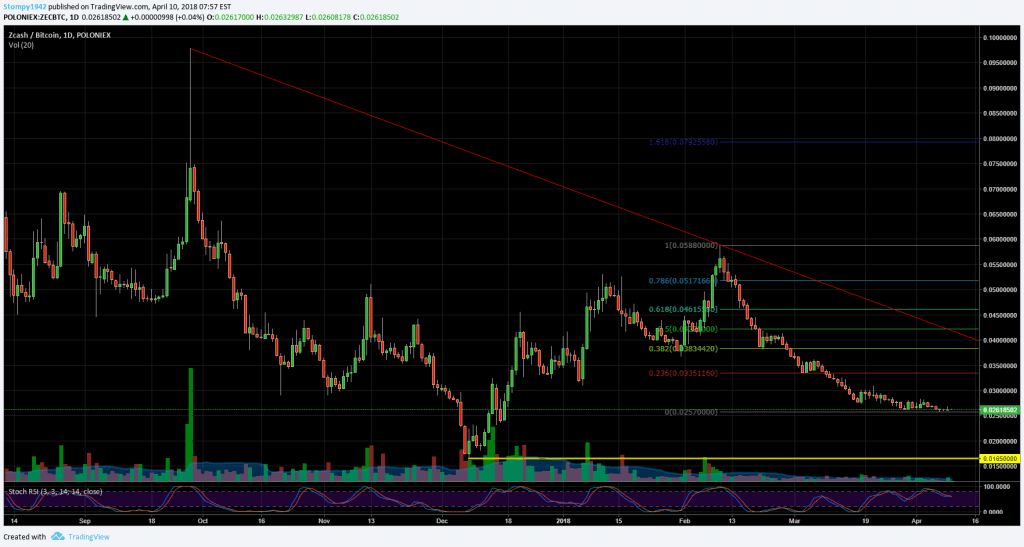 Against the dollar the situation does not look so good. Short term support is still not seen in the range. Resistance – is difficult to determine at a time when the coin has not stopped its declines. 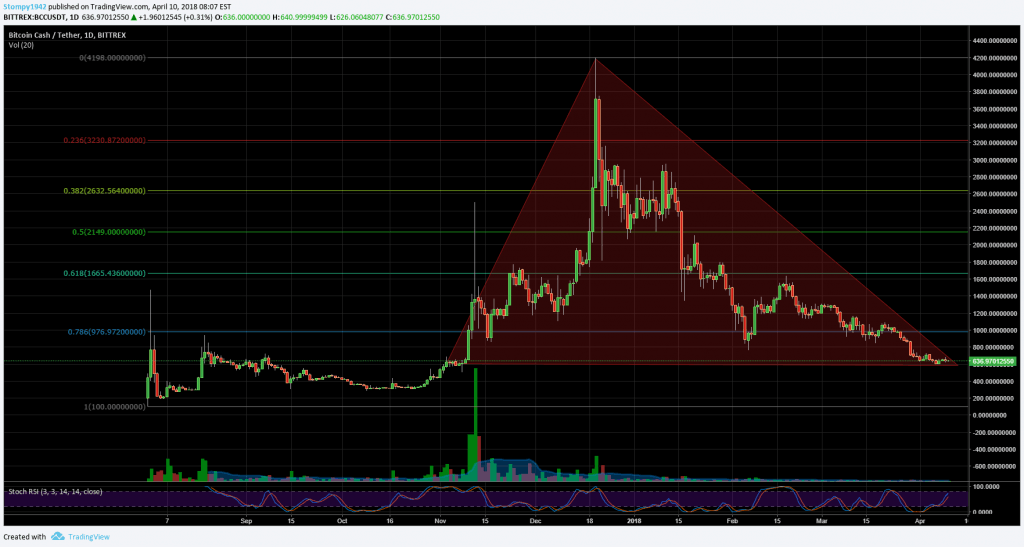 Against Bitcoin, a fairly stable week for the coin. Traded around 0.094BTC where support is. Resistance level lies at 0.1BTC. From here, it does not seem that there will be much more to lose. Volatility decreases from week to week. 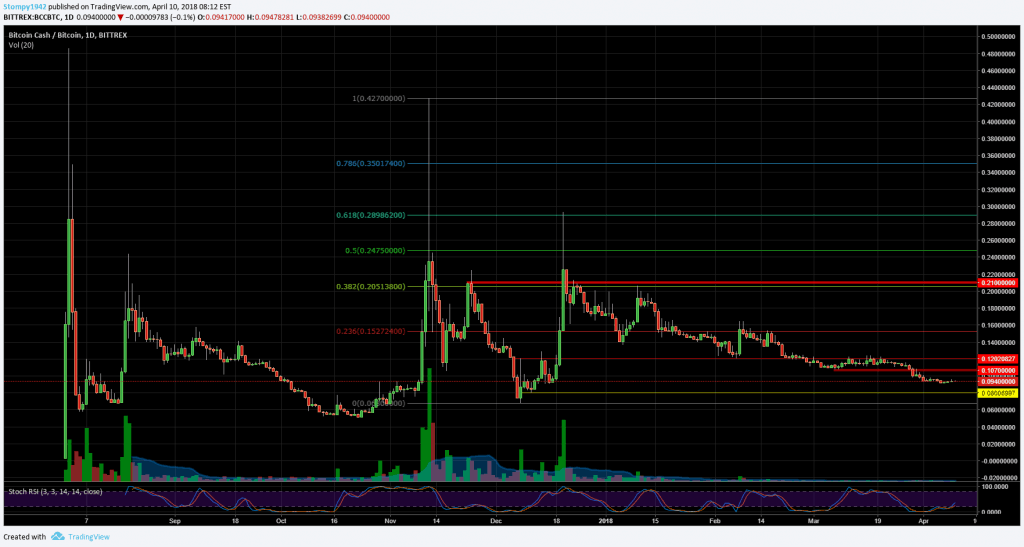 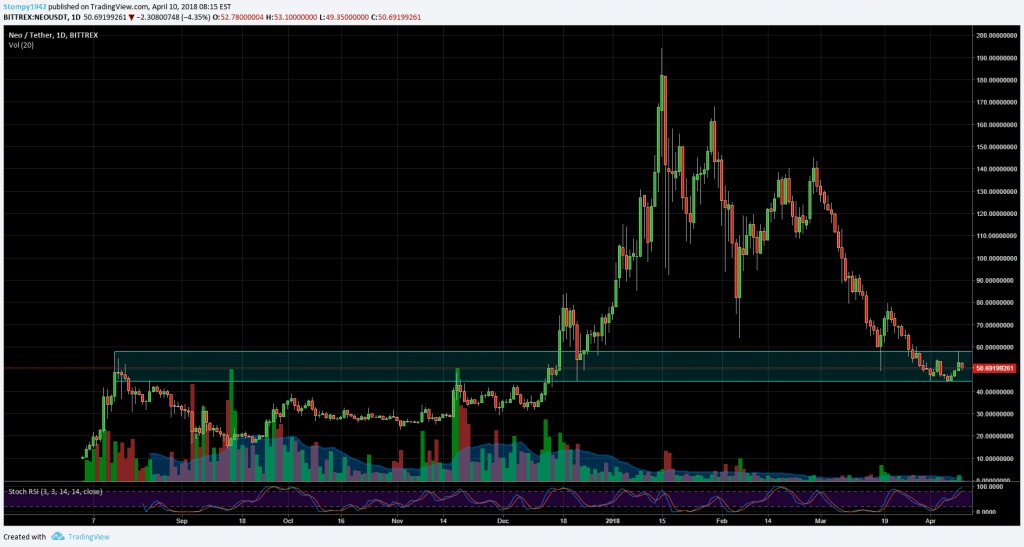 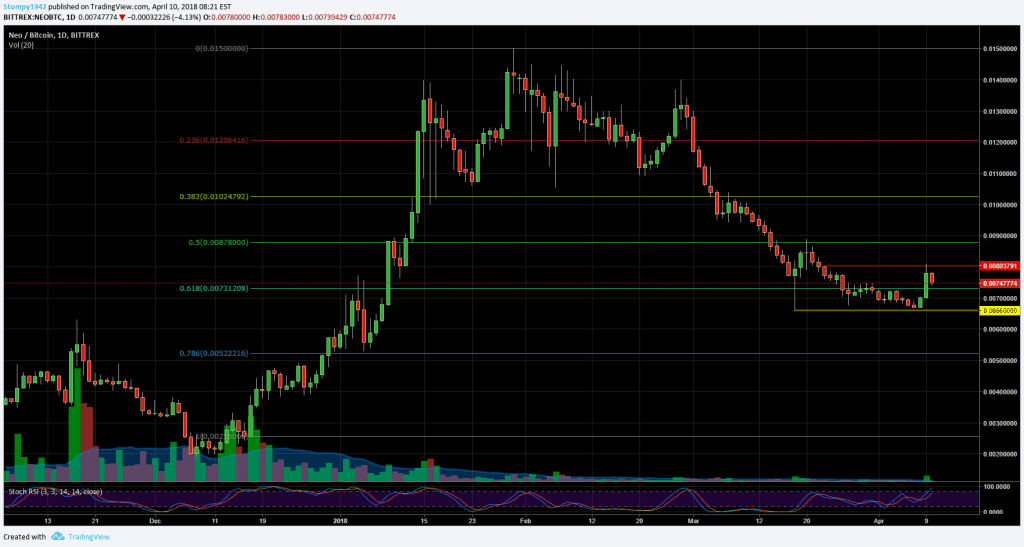 How High Can Bitcoin Go After the $10K Breakout?

CoinDeal Derivatives: Learn how to trade on derivatives for free and win Apple prizes

Analysis: The Current Bitcoin Bullish Cycle Could Last Until 2022

‘The Trend for Bitcoin is Clear – UP,’ Says Market Analyst
Scroll to top