The Crypto market started the week with a green trend. However, the lack of confidence in the markets shows it’s signs and attempts to break through also bringing with them the correction. After last year madness the market is still unstable and it is hard to say that we saw it’s bottom. Sidelong positive forecasts, the downward trend continues and may lead to further declines, as we saw in the years 2013-14 after the fall of MTGOX and the subsequent price declines.

Although, despite the Bitcoin downward trend we are witnessing a mixed trend in the alternative coin arena trading against Bitcoin and Etherium. On the other hand, trading against the dollar has weakened and rumors say that USDT continues to print. Many ask whether there is any more to go down? The crypto market is not for the faint-hearted and veteran traders have warned against the wave of declines and some are expecting further declines until the market stabilizes. In the meantime, the media has already lowered gears in the world of Bitcoin and Blockchain, and most of the reports deal with the wave of declines and tightening regulation.

Bitcoin’s (relatively) low dominance signifies interest in alternative currency trading, which holds around 62.5% of the market. If Bitcoin’s dominance increases, it will hint at a change in this trend. Based on the past, it can be said that when the dominance of Bitcoin rises, the altcoins decrease and when Bitcoin’s rate rises, vice versa.

Bitcoins Rapid Adoption: Prague Installs More Bitcoin ATMs, Worldwide BTC ATMs Cross Over 3k. Despite the bearish trend, bitcoin adoption remains bullish. More countries around the world are rapidly adopting Bitcoin as the total number of Bitcoin ATMs has surpassed 3,000. The Czech Republic is one of the nations that have wholeheartedly embraced the magic of bitcoin. Prague, Czech largest city, welcomes ten new bitcoin ATMs. The ATMs will be installed in ten important and busy metro stations in the city. They are Dejvická, Zličín, Pankrác, Můstek, Hlavní Nádraží, Flora, Černý Most, Skalka, Florenc, and Nádraží Veleslavín.

Bittrex to Launch Fiat Trading Options After New Bank Partnership. US-based cryptocurrency exchange, Bittrex, has successfully signed an agreement with the New York-based Signature Bank (amongst others) that will enable its users to swap digital assets for fiat. This service will only be available to a fraction of the 3 million Bittrex customers. Only corporate users in Washington, California, New York, and Montana will be able to trade crypto for U.S dollar. However, not all the 200 cryptos supported by the exchange will receive the fiat trading pair – only Bitcoin, Tether, and TrueUSD are currently available.

China could be opening up to Bitcoin Regulations rather than an outright ban. The People’s Bank of China has so much hate for ICOs, bitcoin, and other cryptos, and has issued several warnings to the Chinese citizens that these digital assets have no real-world use just yet. However, Chinese crypto investors may soon start trading crypto in the country as Xiao Xin of The Global Times, an English language Chinese periodical, has raised an argument for the regulation of bitcoin in China rather than an outright ban of the digital asset.

Bitcoin Bull, Dan Morehead, Says Investors Should Buy Bitcoin While It’s Still Cheap. For some time now, the crypto market has been bearish for no apparent reason, with Bitcoin fluctuating around $7500 which is more than 60% drop from its all-time high at $19,500. Dan Morehead, the founder of crypto-oriented investment firm Pantera Capital Management, believes that this is a good signal for investors to buy more bitcoin and other cryptos. According to Morehead, all the cryptos are cheap right now, and it’s much less expensive to buy and partake in the rally as it goes.

Visa Payment network goes down throughout the UK. Another positive for Bitcoin? Visa payment system has encountered a network issue, leaving shoppers around Europe stranded as they are unable to make purchases or complete their transactions. Visa is a multinational financial services corporation based in the US which represents the world’s largest remittance platform and is widely used across Europe. With the world watching the unfortunate event, it may be a signal that it is time for users to stop using central payments systems and start using the ever functional and secure blockchain payment systems like bitcoin.

Steve Wozniak: ‘Only Bitcoin is Pure Digital Gold’ With over 1,500 digital currencies existing today, the co-founder of Apple, Steve Wozniak, has described bitcoin as ‘pure’ with distinctive features. Wozniak says he buys into what Twitter CEO, Jack Dorsey said about bitcoin becoming a default global Internet currency and he wishes it will happen. According to Wozniak, no other cryptocurrency could completely match Bitcoin because all the altcoins in the crypto space have to give up some aspects of bitcoin in order to develop a business model.

Indonesia Legitimized Cryptocurrencies, Classifying them as Commodities. After a four months study on the usability of cryptocurrencies, Indonesia will soon classify digital currencies as tradable commodities in the Indonesian futures exchanges. A new decree which will make cryptos a commodity that could be traded in the country was signed by Dharma Yoga, the head of the Trade Ministry’s Futures Exchange Supervisory Board (Bappebti)

ZenCash Statement On Double Spend Attack. The ZenCash network suffered a 51% attack on 2 June at about 0:43 pm EDT (03 June 02:43 hrs UTC). The perpetrator managed to restructure the blockchain multiple times, successfully double spending two transactions. However, the ZenCash team were quick to mitigate the procedures to make future attacks more difficult. It could be that the attacker had a private mining operation that is large enough to conduct the attack with rental hash power.The suspect wallet address is: zneDDN3aNebJUnAJ9DoQFys7ZuCKBNRQ115 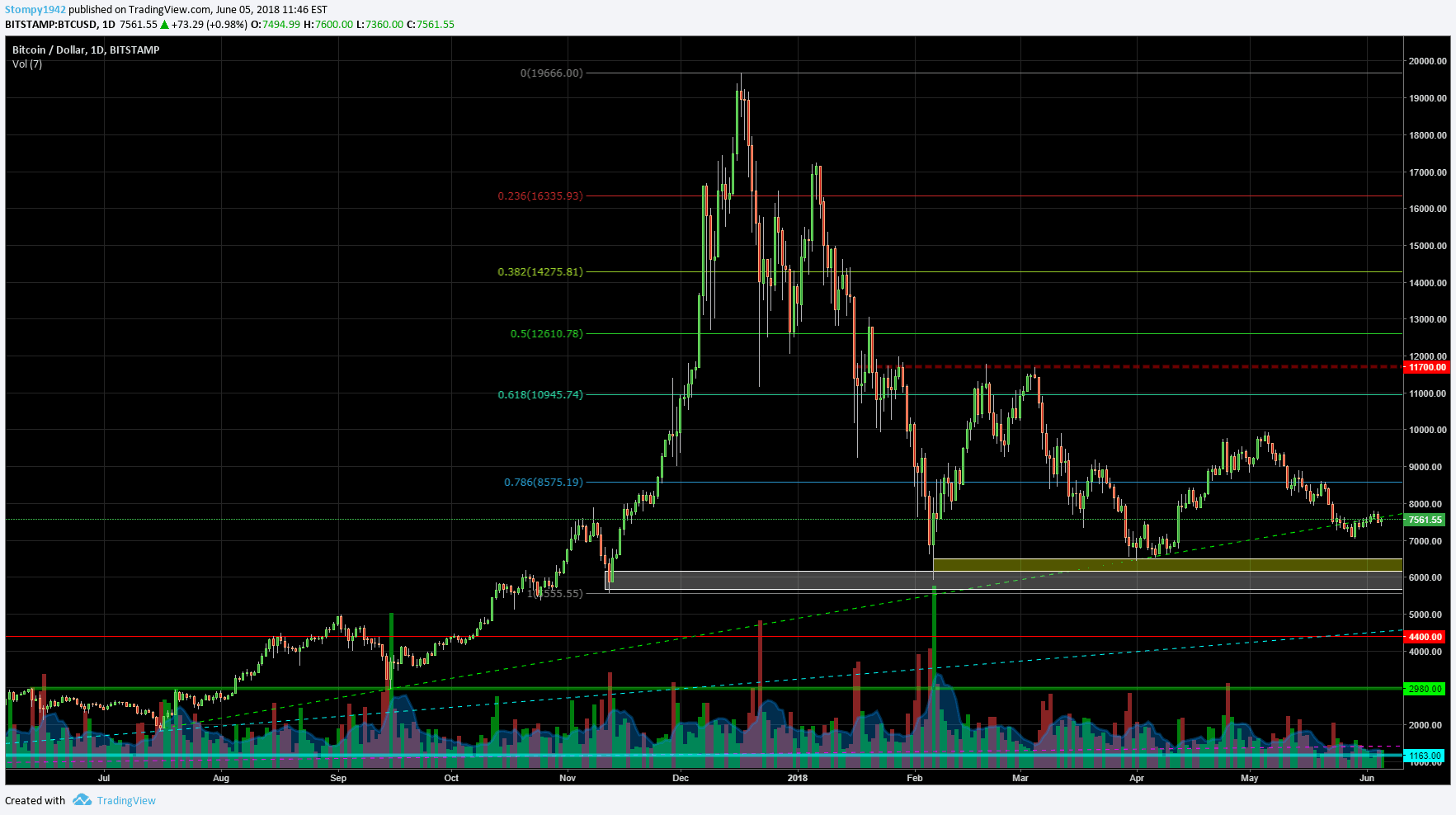 Against the dollar the uptrend continues to trade around the $600. The resistance zones being tested in this period and map the next resistance levels at $700 with support in this range at $560. 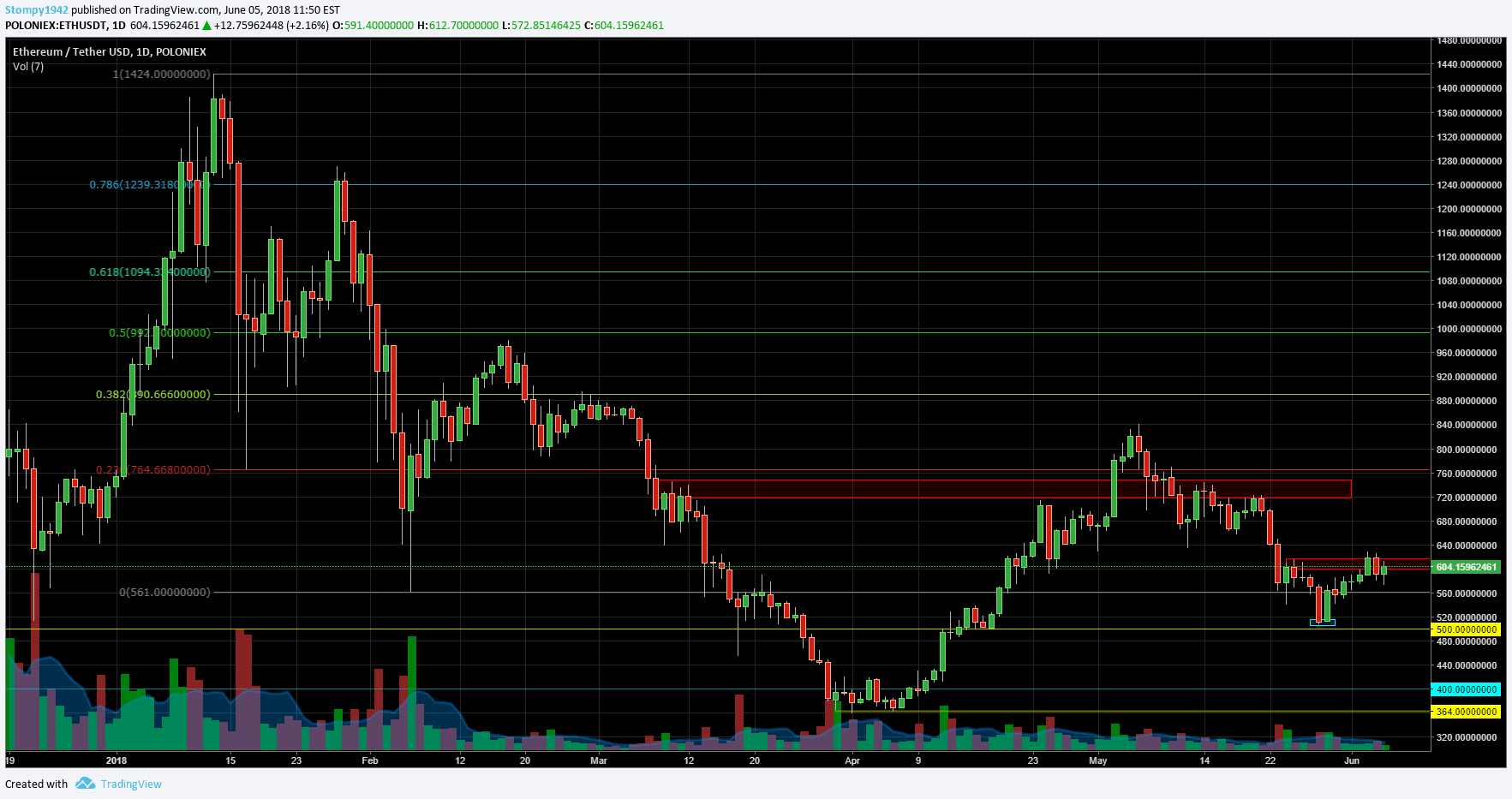 Against the Bitcoin positive trend this week, the support held and traded around 0.079 BTC. Resistance is at 0.083 BTC and this range around 0.075 BTC. 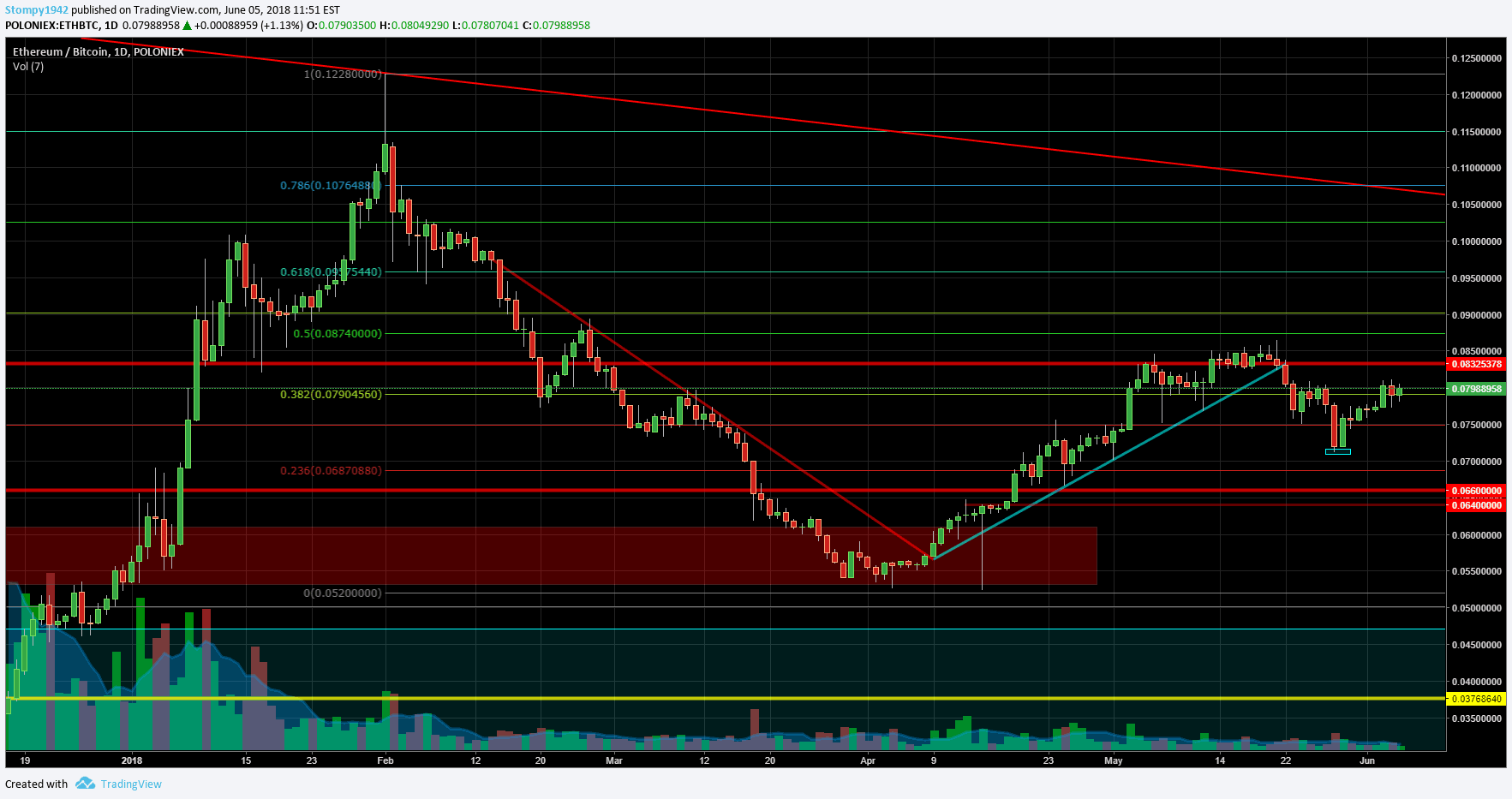 Against the dollar, its been a positive week after a brief correction in May. The support holds around $1,000 and traded around $1,136. 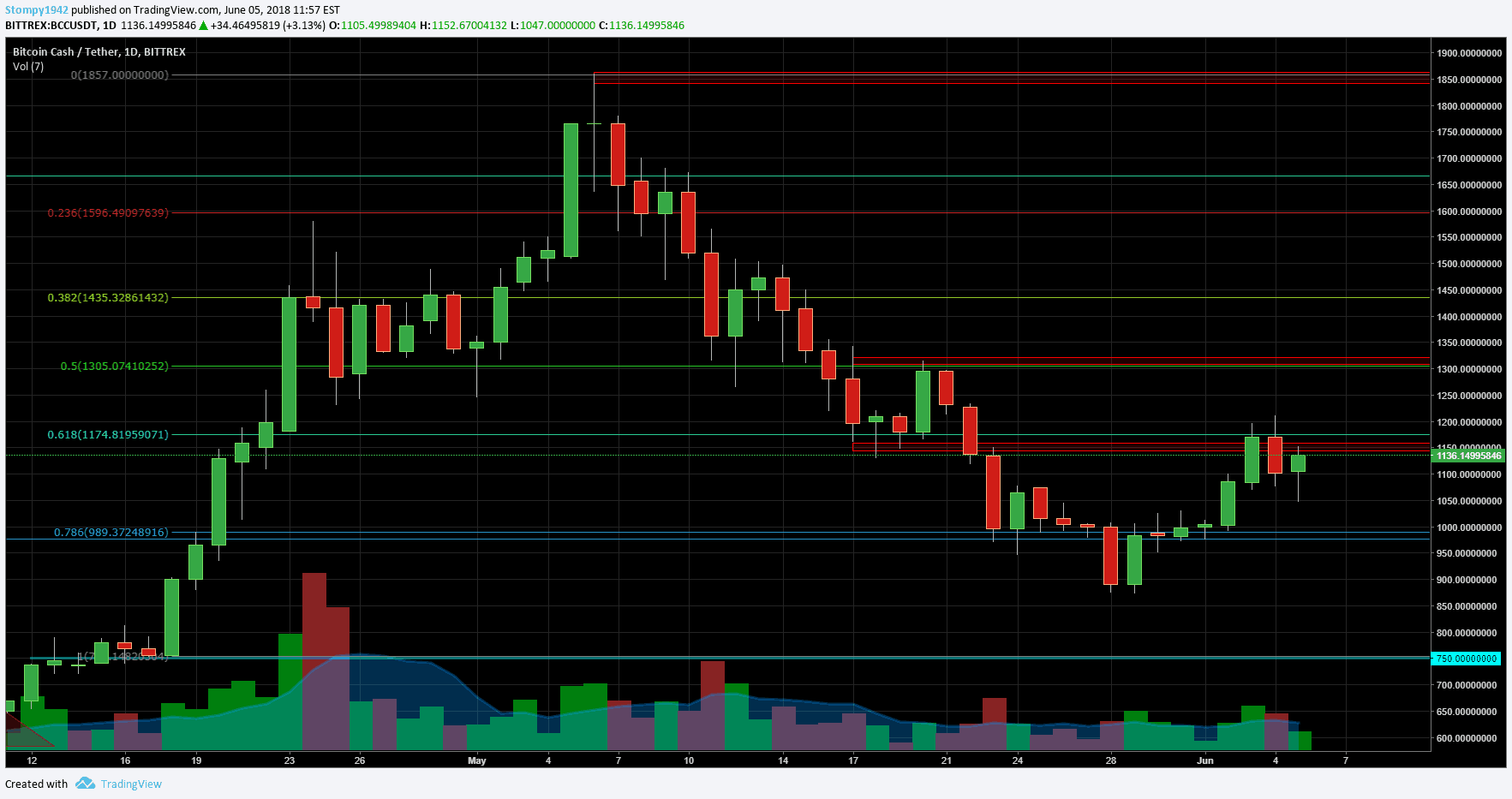 Against Bitcoin after the support was received, its around the 0.13 BTC. The overnight rising trend traded around 0.149 BTC with resistance at 0.155 BTC. 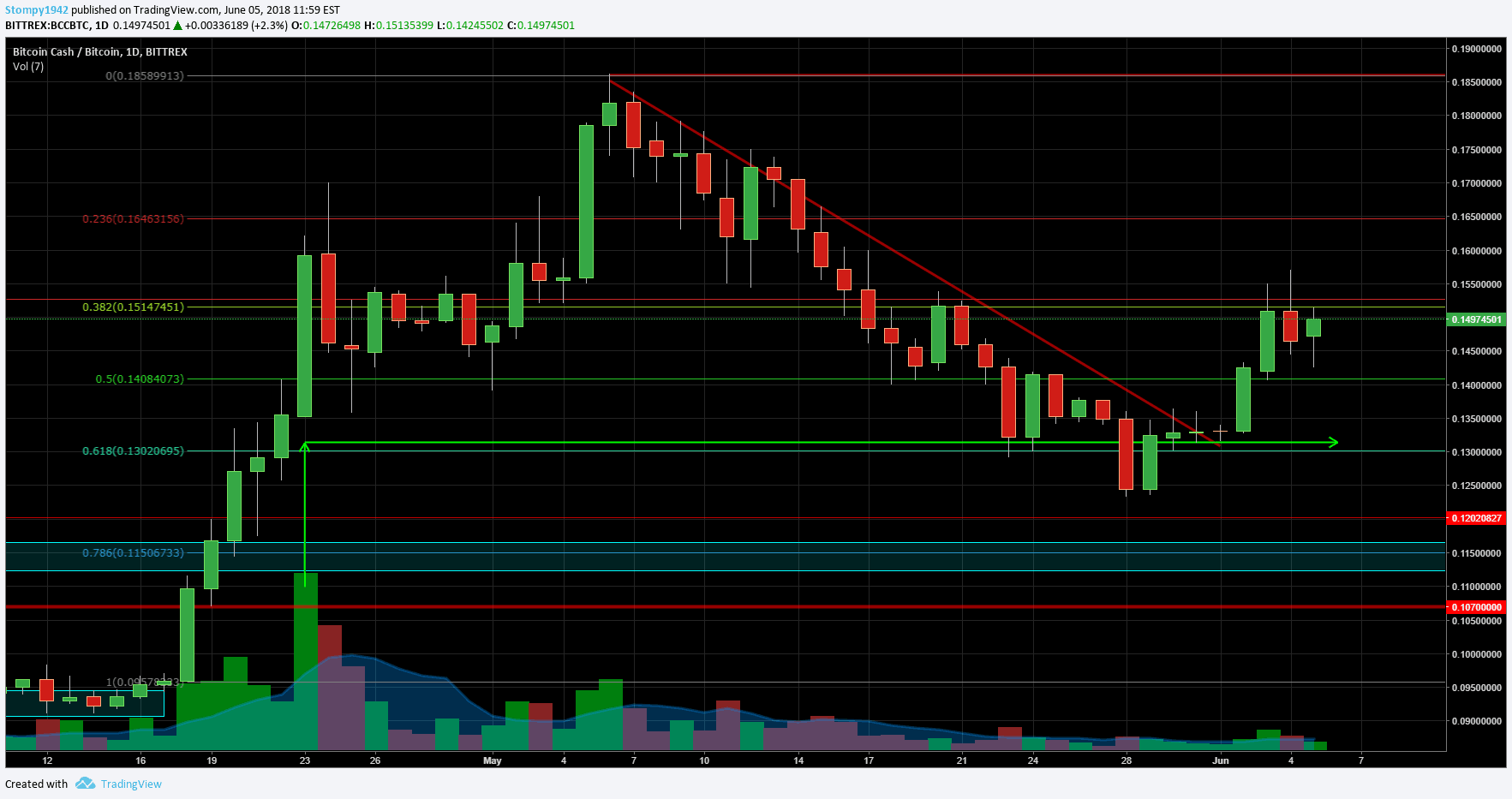 Against the dollar traded around $28 and the resistance is not far from the floor areas around $25. But it built up after a period of resistance to decline at $30 in this range. 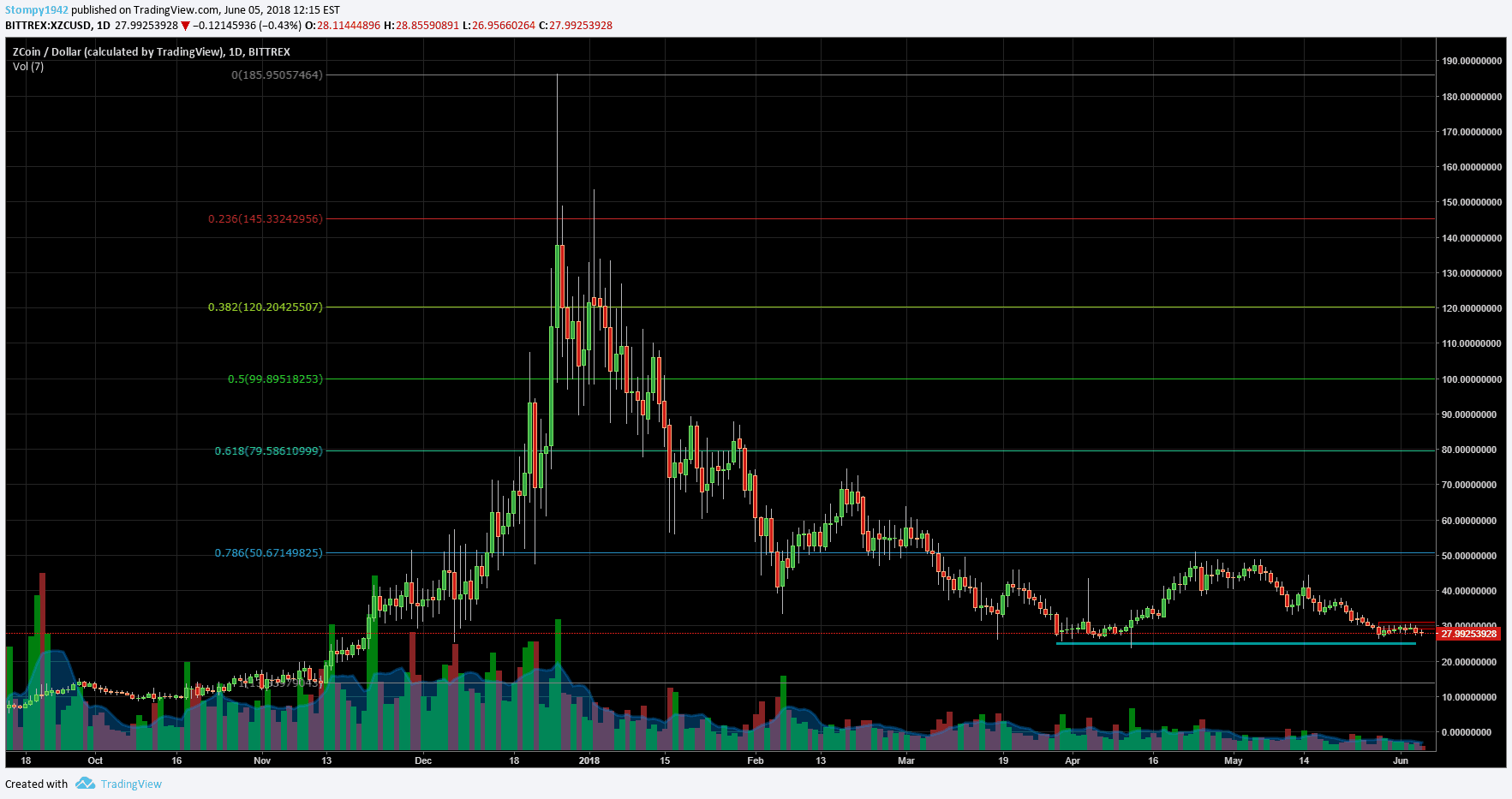 Against the Bitcoin trend, it downward traded around the low of the last period at 0.0036 BTC. Is there another time where we get off the map? Resistance is at 0.004 BTC. 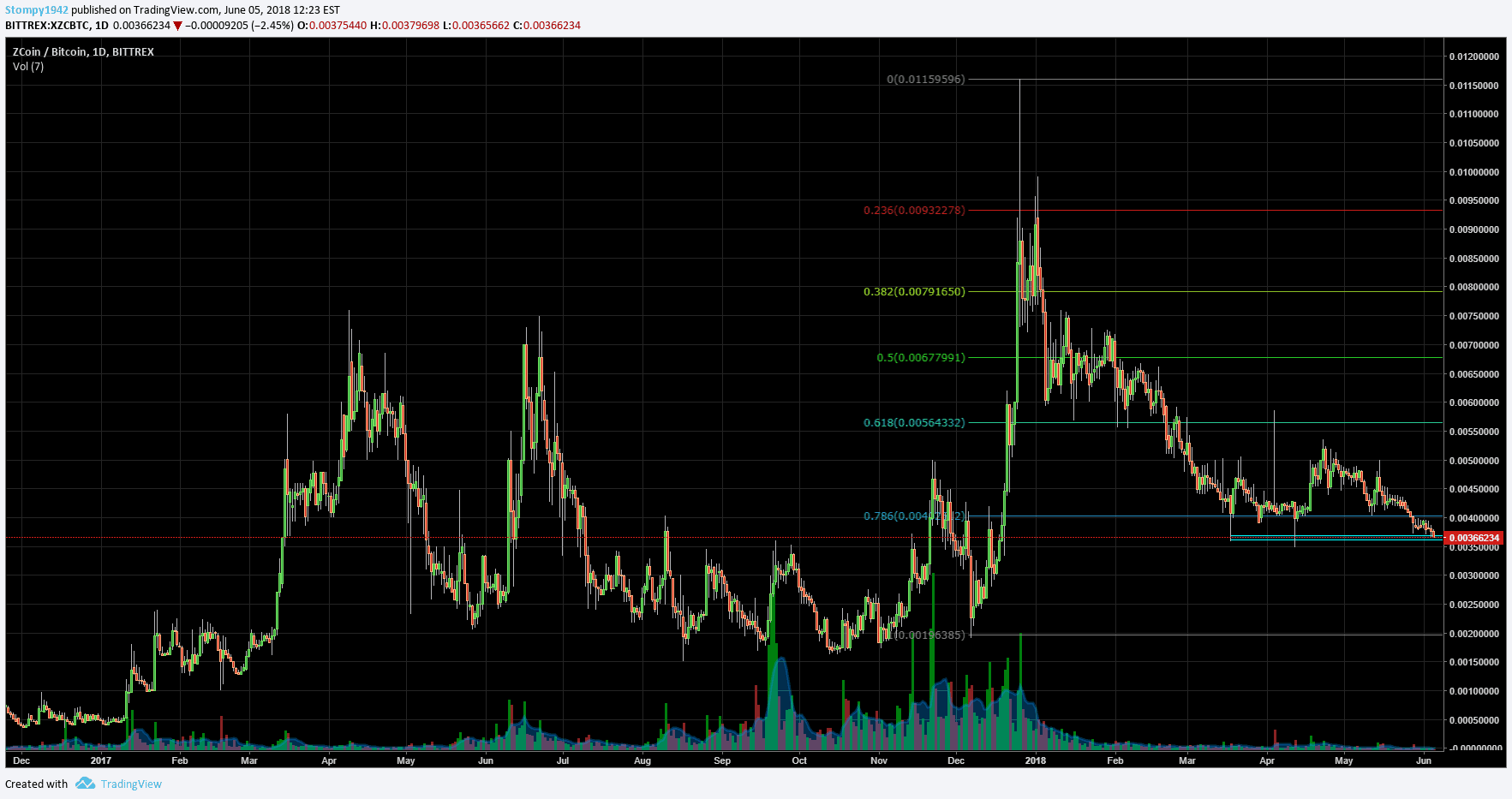 Against the dollar traded around $2.98 which is not far from support at around $2.5 with resistance at $3. 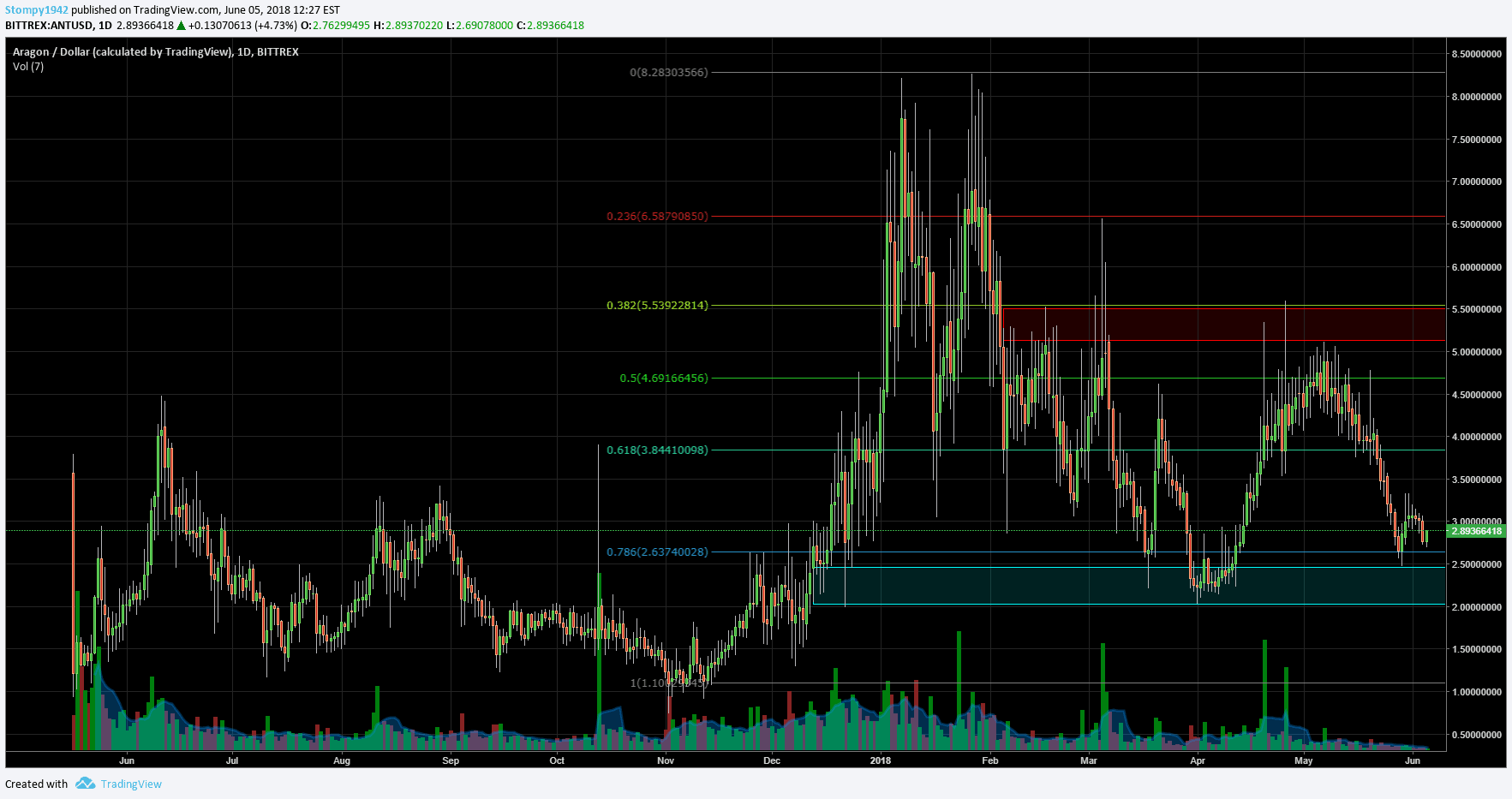 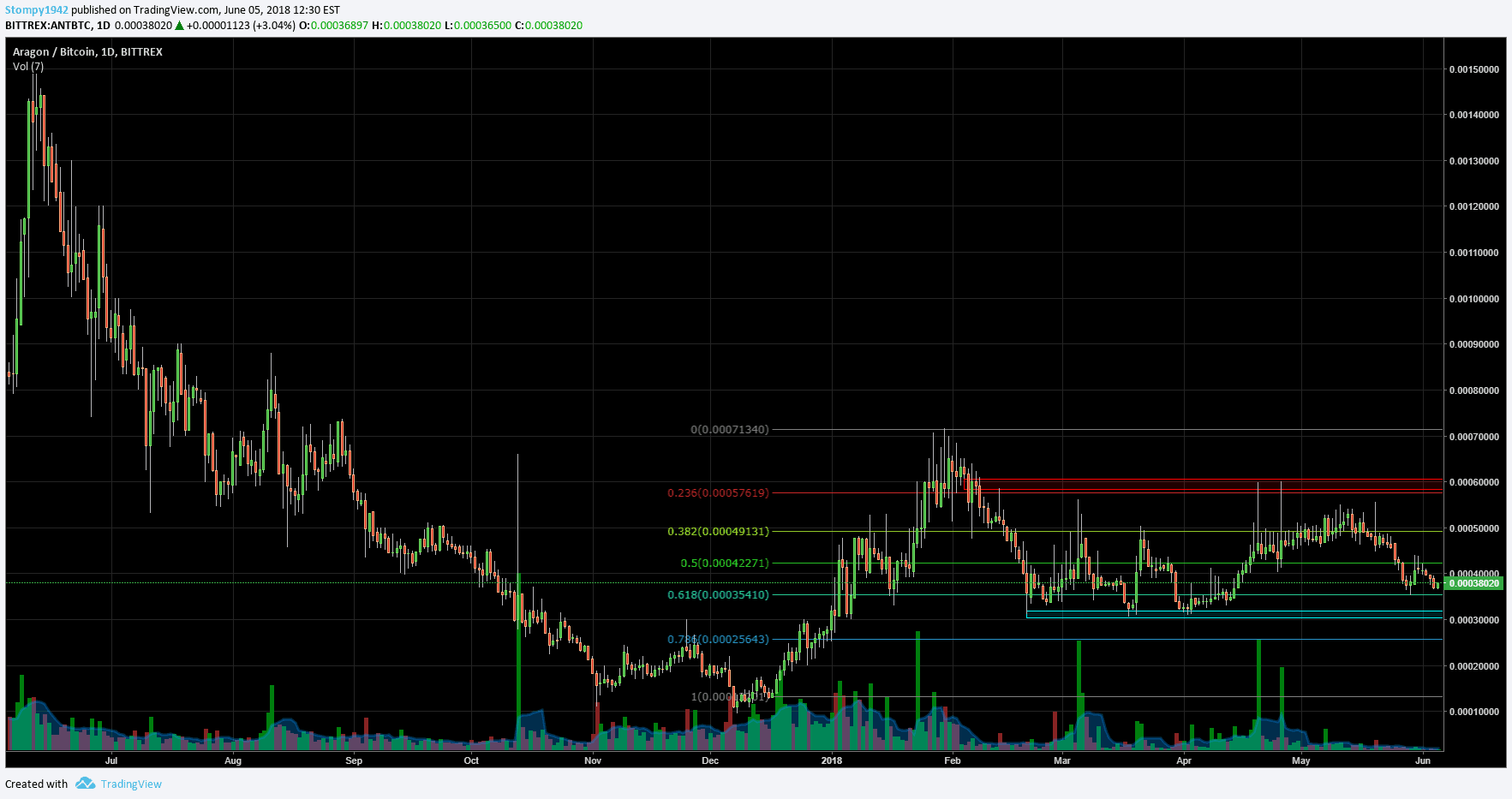 Against the dollar its not trading but can be analyzed with a trading view calculation We seem to have returned to the floor areas at the beginning of trading which is around $0.90 These levels are considered at this time with resistance at $1. 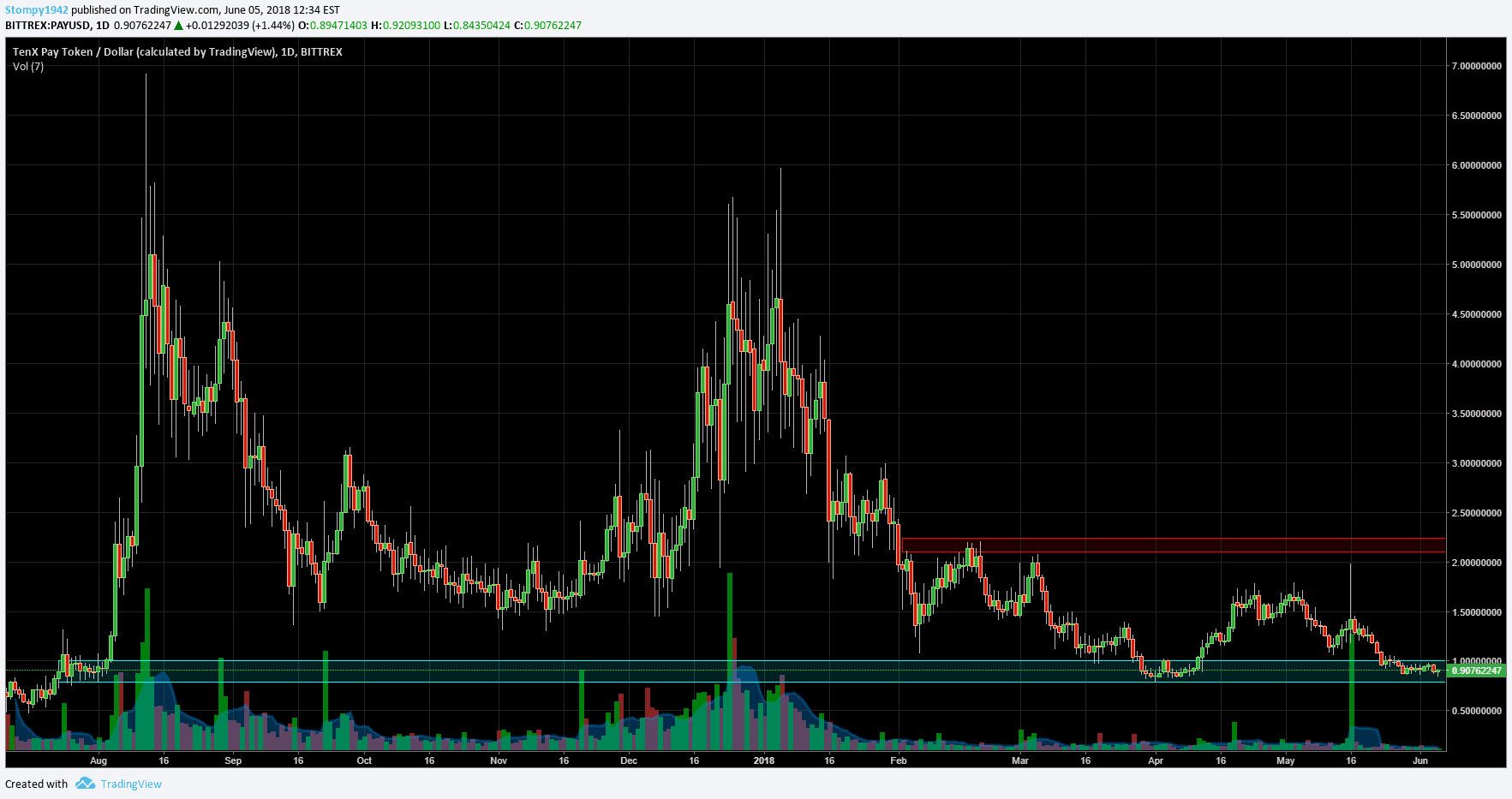 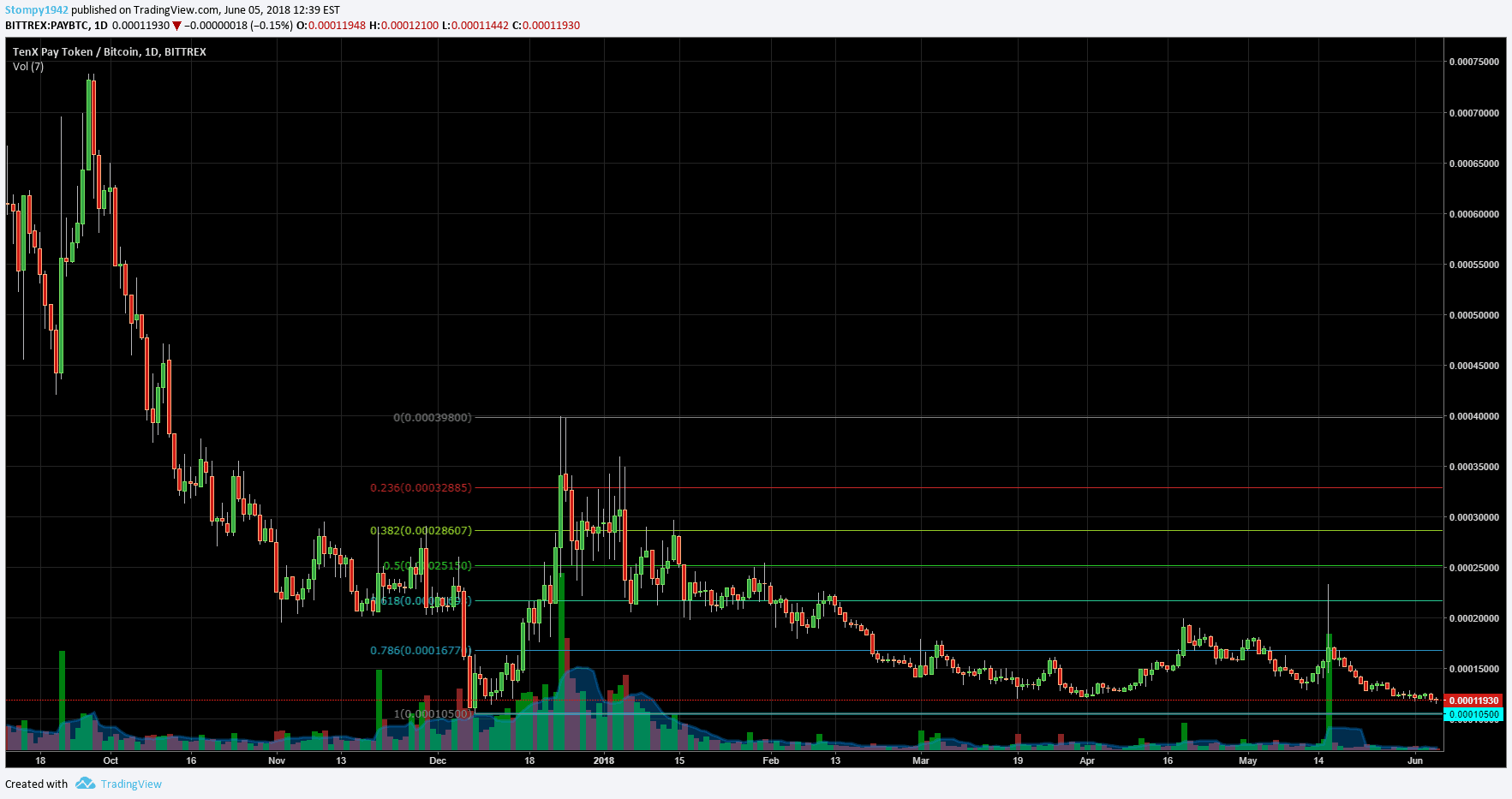 Leaked: Test Interface For China’s Digital Yuan Developed By The Chinese Agricultural Bank
These Are The Only 2 Cryptocurrencies That Beat Bitcoin’s ROI Today
Market Watch Sep.9: Crypto blooding continues
Bitcoin Looks Bullish, But Could This Action Turn Into a False Breakout? BTC Price Analysis
Does Coinbase Represent the Banks of the Future?
Washington DC Lawyers Can Accept Cryptocurrency Payments, The District Of Columbia’s Bar Says
Satoshi Labs announces on a special discount for the Trezor One
Messari: ETH Share On Ethereum’s Blockchain Contentiously Decline, Might Soon Tumble Below 50%