Crypto market’s volatility continues. A week of declines has turned the support level at around $10K to the current resistance level. Even though the market is still in a bit of panic, it’s important to remember that the market is cyclical and continuing to grow, that means we are still seeing the continuous correction that we had since at the beginning of the year. Additionally, the crypto market is still young and small. As a result, it can be easily manipulated (as we saw last week with in the case of Mt.Gox sell off) And it is strongly influenced by geopolitical events. For example, regulatory announcements in China and South Korea have led to a sharp decline in the value of the crypto market. Alongside these, the FUD and the uncertainty and doubt that the media and press brings, combined with the uncertainty coming from banks, also affects the market.

In the Altcoins sector, we saw some mixed signs this week. Although trading is relatively stable against Bitcoin, against the dollar the market appears to be on an incline, it seems to be positively affected by trading against Bitcoin.

In the ICOs sector, there has been a sharp decline in the number of funds raised last month, but it appears that successful projects still have a high chance of raising all of the funds necessary and making good ROI to their investors.

News from around the world

USA – The US Securities and Exchange Commission (SEC) has announced that it will require crypto currencies exchanges to be listed as stock exchanges. This move seems to have led to a decrease in Bitcoin’s price.

China – China’s regulation authority has blocked foreign crypto currencies on the WeChat website. This comes just a month after they blocked access to other crypto related websites and exchanges.

South Korea – According to various reports, it appears that South Korea will cancel the ban on ICO issues.

In Sierra Leone (West Africa), the first national elections took place on the subject of a new Blockchain infrastructure.

Analysts attribute the recent decline and volatility of Bitcoin’s price to the purchase of ~ 36K Bitcoin by Nobuaki Kobayashi, the man in charge of Mt. Gox. Due to legal proceedings, Nobuaki cannot sell the rest of his Bitcoins before September 2018. Many analysts predict this will aid in the market’s recovery.

Wirex has launched a new debit card that supports Bitcoin. The card is now available to English residents, and the company plans to expand and offer the card to customers outside of Europe.

News that BitPay may allow around 100,000 businesses that they work with the ability to receive direct payments in cash. As a result, Microsoft announced that it would also begin receiving Bitcoin and Bcash as payment methods.

A Japanese electronics company is exploring the possibility of using the Lightning Network as payment for electric car charging stations.

The client of “BitcoinCor” 0.16.0 launched with full support for SegWit. This update may cause lower transaction fees and faster transactions process times.

After this past week, we have returned to what we believe was some optimism. Following the price broke the downward trend line (red), we saw a dump that brought the price below the falling trend line, and saw support leaning on a rising trend line (marked in azure). It seems that the graph is at a point of convergence, and it seems that volatility is will not end anytime soon.

It is currently traded around $9,000 with resistance around $9800. From this range, we may be able to reach above $10K. Support at $ 8500. You can check our daily BTC price analysis for more Bitcoin charts. 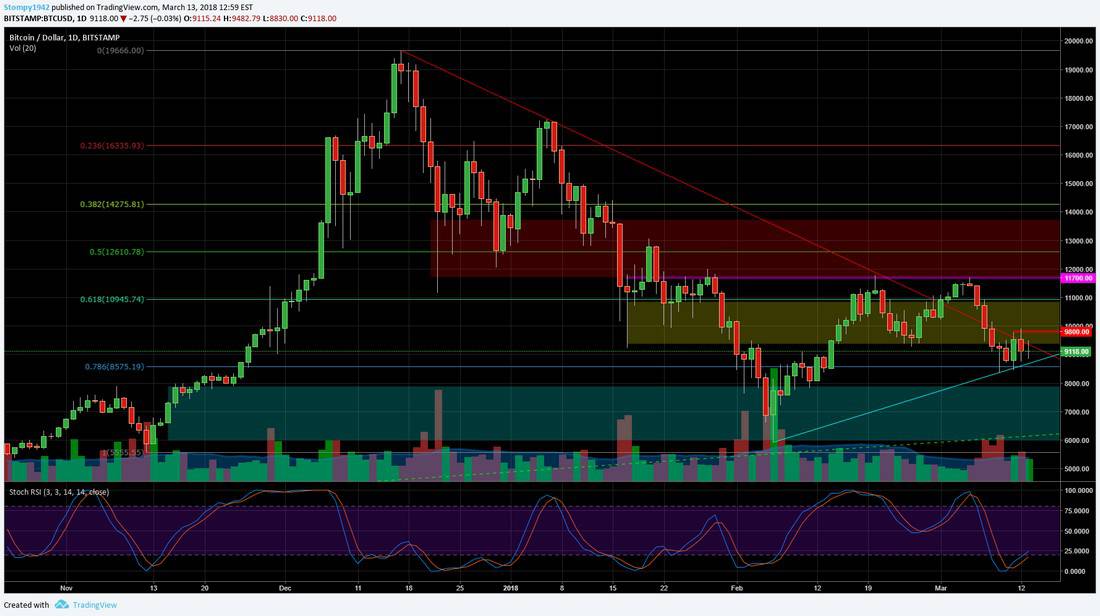 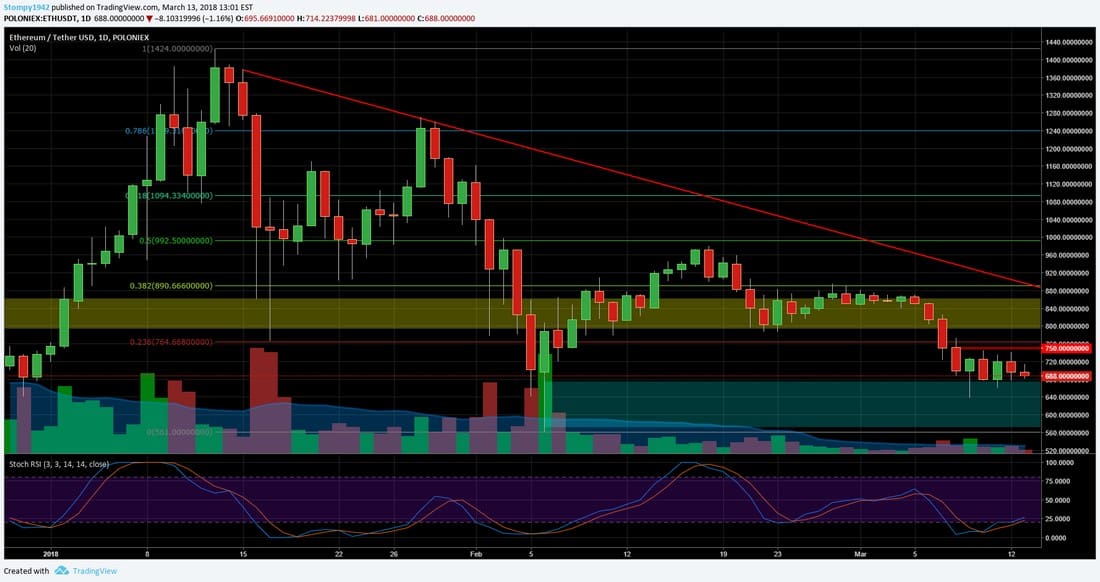 Against Bitcoin – Last week’s price was relatively stable. Traded around 0.075BTC with fragile support being built in 0.073BTC zones and resistance at levels of 0.08BTC. 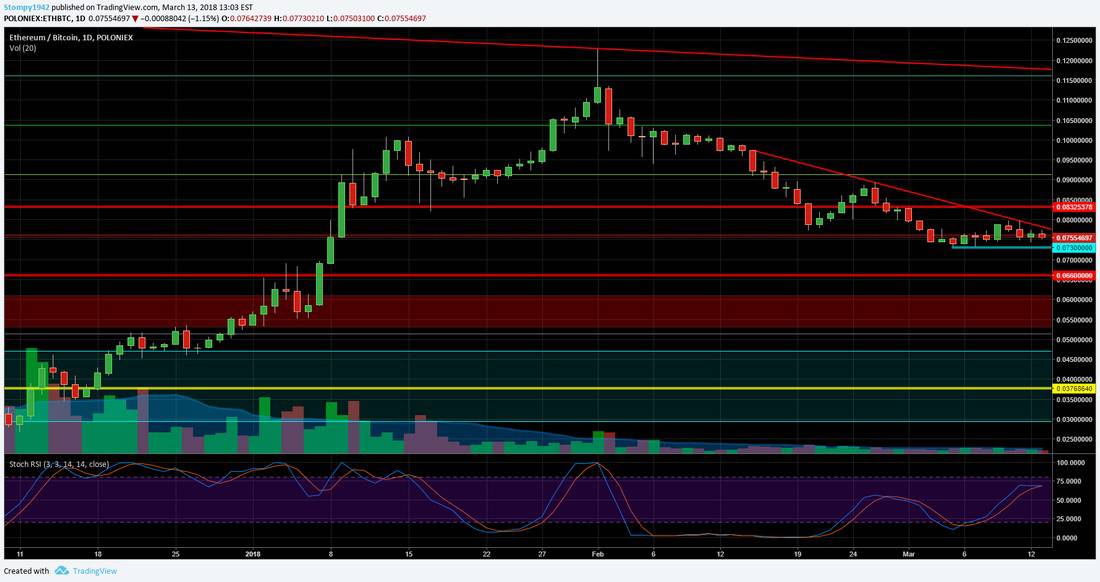 Against the dollar, the price dropped to $950, with current support levels breaking around $1,200. Support this past week was around $950 zones and resistance around $1200. 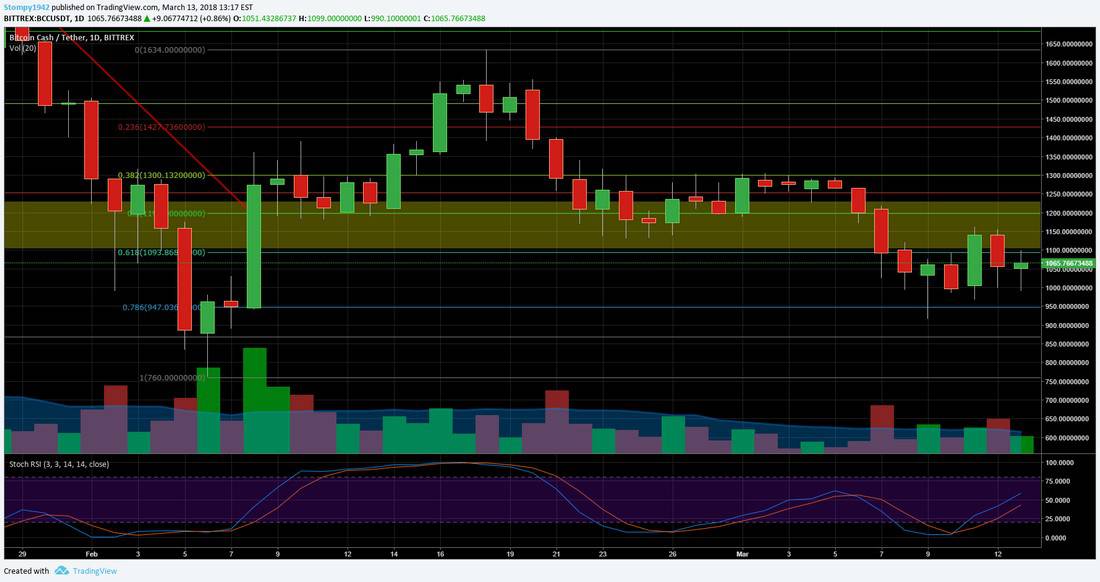 Against Bitcoin – the price is rising. Traded around 0.115BTC with support in the 0.107BTC areas and resistance at 0.12 BTC. 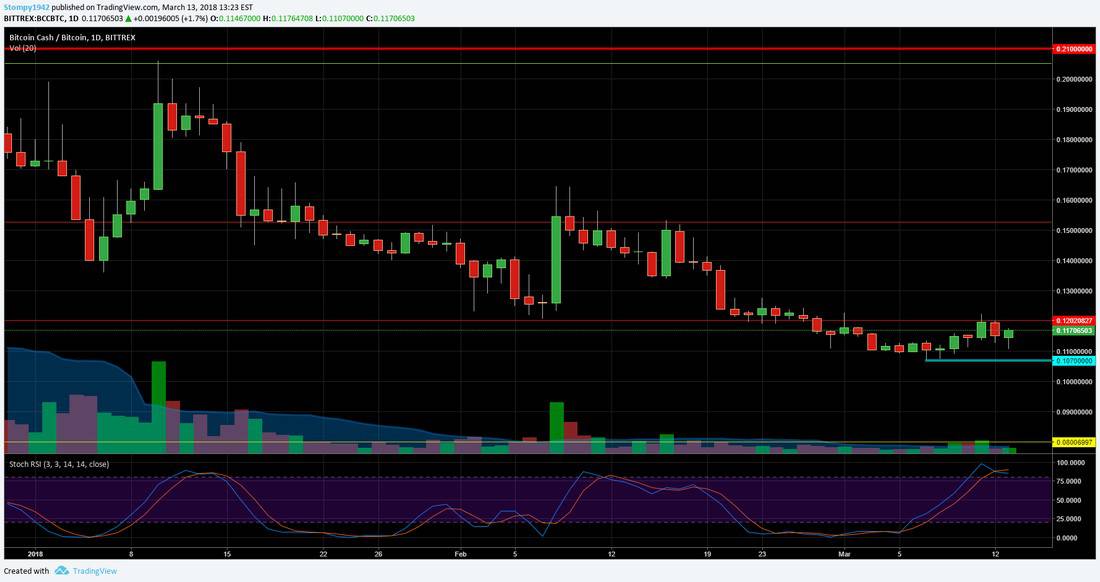 Since the ATH of $ 14 in December, the price is declining. Now, is at an interesting point technically. Against the dollar – traded around $ 3.35 with resistance around $ 4 and support at $3. 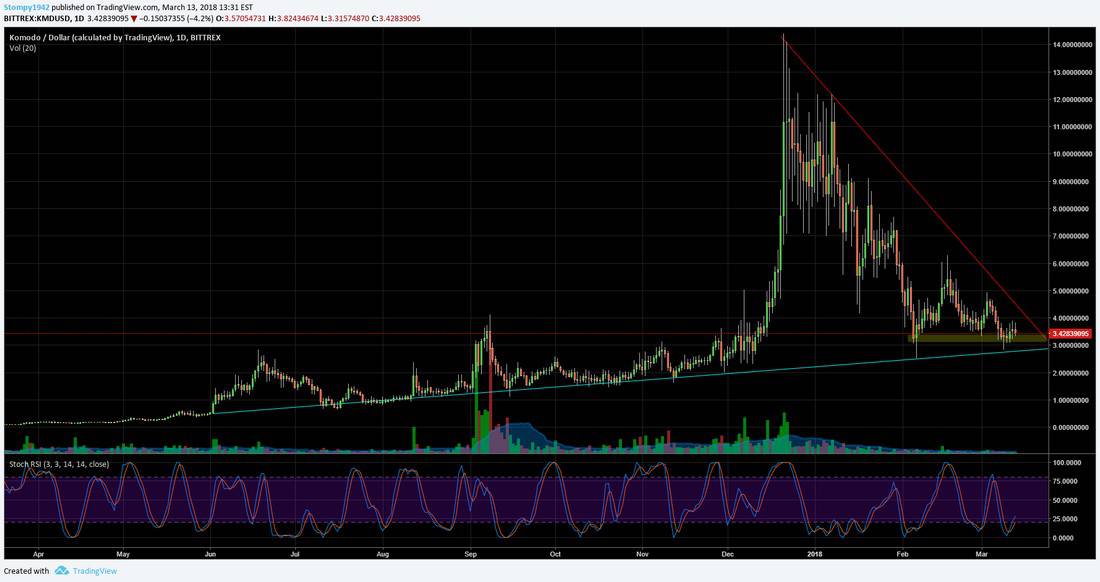 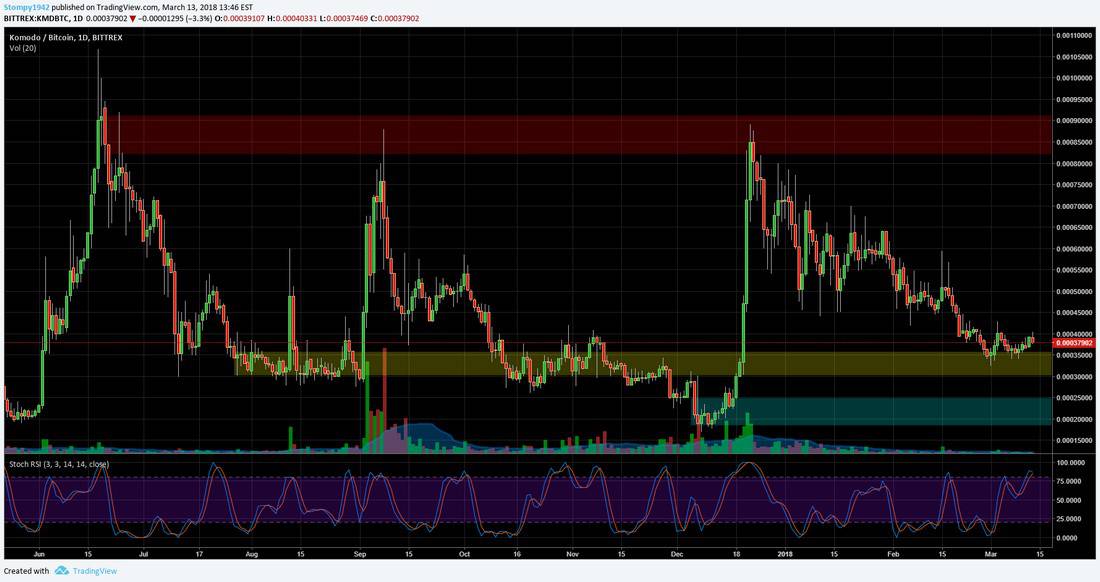 Against the dollar – Since it’s ATH of $19 in December, the price has been slowly dropping. It is currently traded around $5.5 with support being tested around  5 and resistance in the $7 zones. 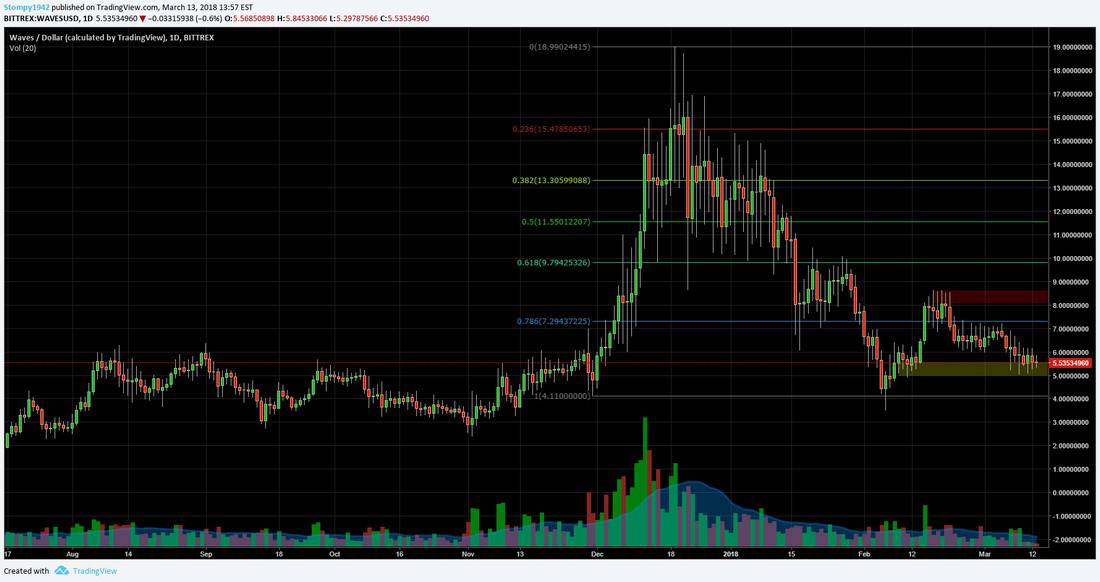 Against Bitcoin – the trend is down telling by the weekly chart, but we noticed a “W” form that is emerging (a bullish sign). Support for the weekly graph is marked in yellow and the resistance is red. Traded around 0.0006BTC with support for these ranges and resistance at 0.0007 BTC 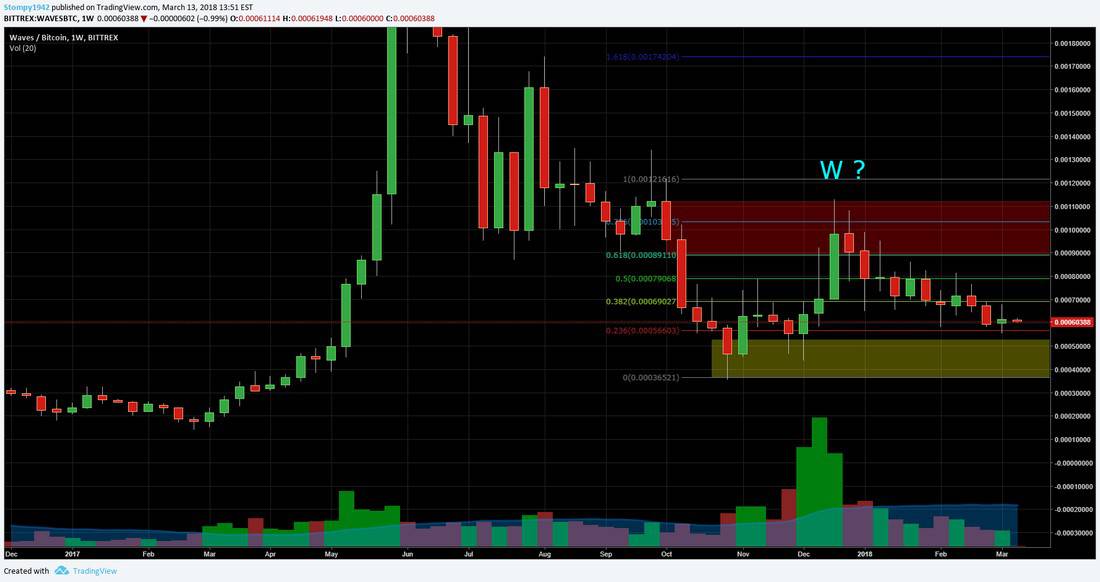 You cannot ignore this altcoin, which rose this week by $50 against Bitcoin and about 30% against the Dollar. Against the dollar – it is trading around $0.44 with support at $0.40. If the support holds, the price will rise. Resistance at $ 0.50. 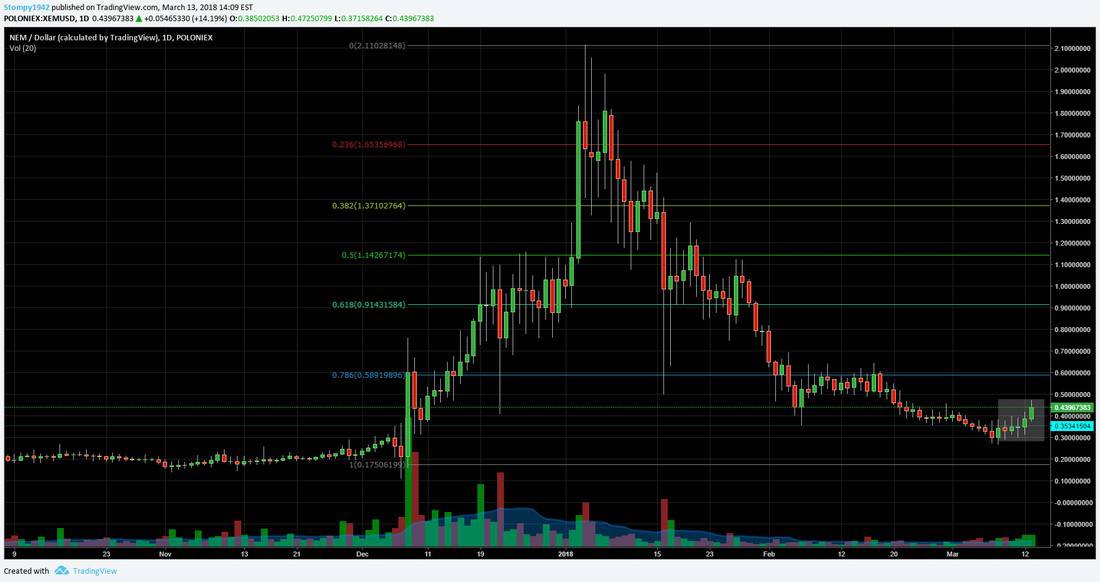 In contrast to Bitcoin, a “W” is forming on a weekly graph. Traded around 0.000048BTC with resistance at the Fibonacci levels, at 0.00005 BTC. At the moment, it’s difficult to determine support, but it appears to be forming within the 0.00004 BTC range. 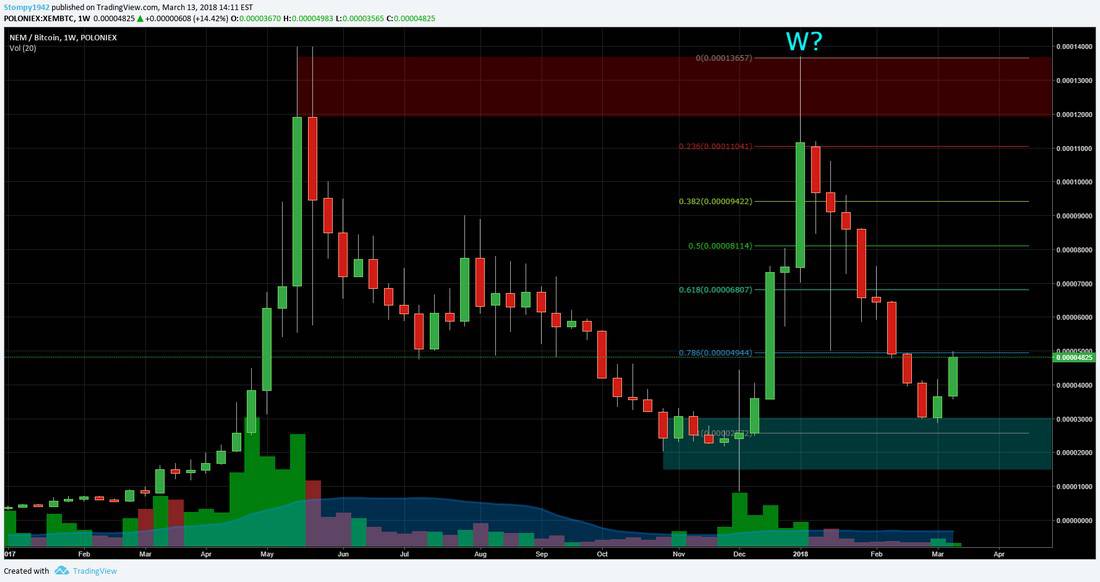 Analysis: How Does USDT Supply on Exchanges Impact Bitcoin’s Price?

Where Are They Now? Binance IEOs ONE, MATIC, CELR And FET Far From Highs: Price Overview & Forecast

Play and monetize your achievements into IQN