After the ups and downs of the past few weeks, the market is stabilizing. Bitcoin’s price continues to climb as the support at $10K remains stable. Anyone remember that around exactly one year ago, Bitcoin’s price was traded around $1000? The dominance of Bitcoin is now at 40% of the whole market value. Unlike Bitcoin, the altcoins are continuing their volatility. Most of them went down. Yet, one Altcoin that stood out to us this week, was Monero, which rose 15% against Bitcoin. The declines are due to the transition from Altcoins to Bitcoin, or in other words, the shifts in market dominance. The overall altcoin’s market value remained stable, around $450 billion.

Regulation News: The inherent risks of the Crypto markets cannot be ignored; ranging from market risks arising from volatility, cyber attacks, security breaches to frauds. Regulation will not necessarily hurt the markets. In fact, proportional regulation may provide security and stability for the long term. As the transparency around the market increases, the more likely institutional money will be invested.

Lighting network is gaining momentum. The chain is expected to enable the process of cross-blockchain transactions, which can be processed immediately and at zero commissions.

Australia – With the work of the local crypto exchange, Bitcoin Australia, and the payment provider, Blueshyft, Bitcoin and Ethereum are now available for purchase in 1,200 newsstands across the country.

Japan –This week the country declared Bitcoin as a legal currency in the country.

Germany – Individuals using Bitcoin as a payment method will be tax free.

USA- The US Commodity Futures Trading Authority (CFTC) has announced that it will allow its employees to trade crypto, but not margin trading.

Maybe due to the rising of Kraken Exchange and Binance, Bitfinex, had reduced its Bitcoin withdrawal fees by 33%. As a result, Bitfinex is ​​now offering the lowest commission among the three largest Bitcoin exchanges.

Tether still poses a risk to the crypto world. Despite the uncertainty surrounding the it, Tether is among the twenty largest cryptos with a market cap of over $2.2 billion. The more the coin is used and its subsequent reliance on the market, the more likely the consequences will be more severe if it were to ever collapse.

Following this, Bittrex exchange announced that it will list the “TrueUSD” ($TUSD), a dollar-backed currency. The company behind the coin, Trust Token, defines the coin as “the world’s first legally-backed stable cryptocurrency.”

IBM believes that blockchain is an important technology that will change the way the world works.

The price is relatively volatile. The descending line (marked in red) at $11K broke up this week. currently It’s traded around $10-11K. in this range, the support levels are being tested around $10K with resistance at the $11,700 levels. 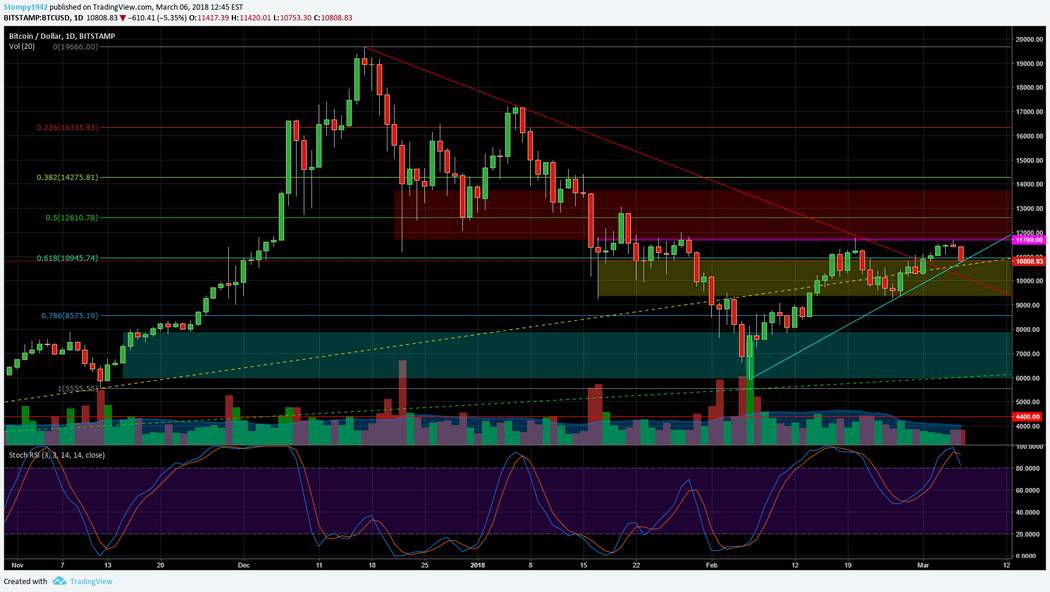 Against the dollar – as long as we stay in the area marked in yellow, trading will be at a stable rate. Support levels of around $800 are being tested and the resistance remains at levels of $900. 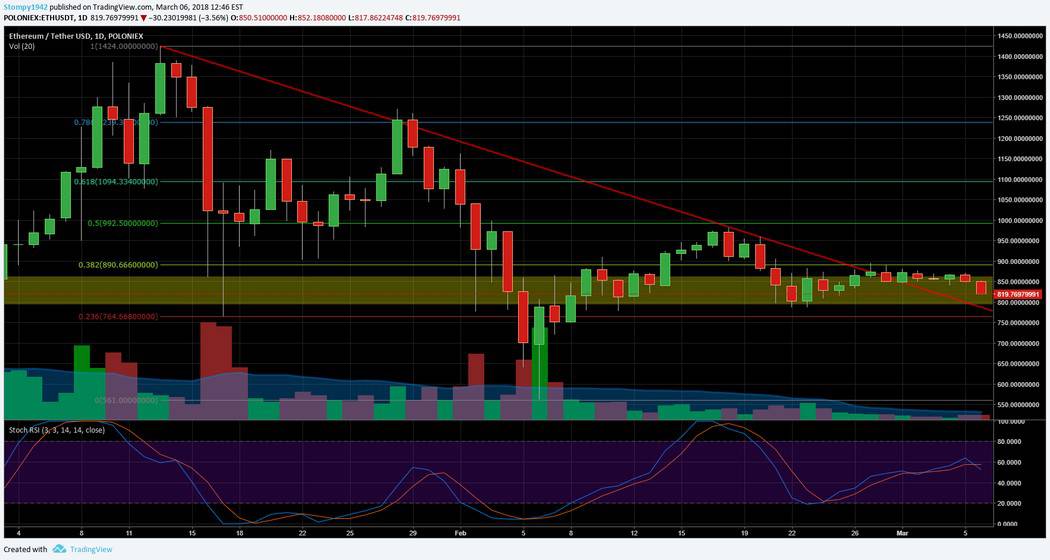 Compared to Bitcoin, we see a Double Top, with support levels breaking down week after week. Traded around 0.075BTC with next support at 0.066BTC and resistance around 0.083BTC. 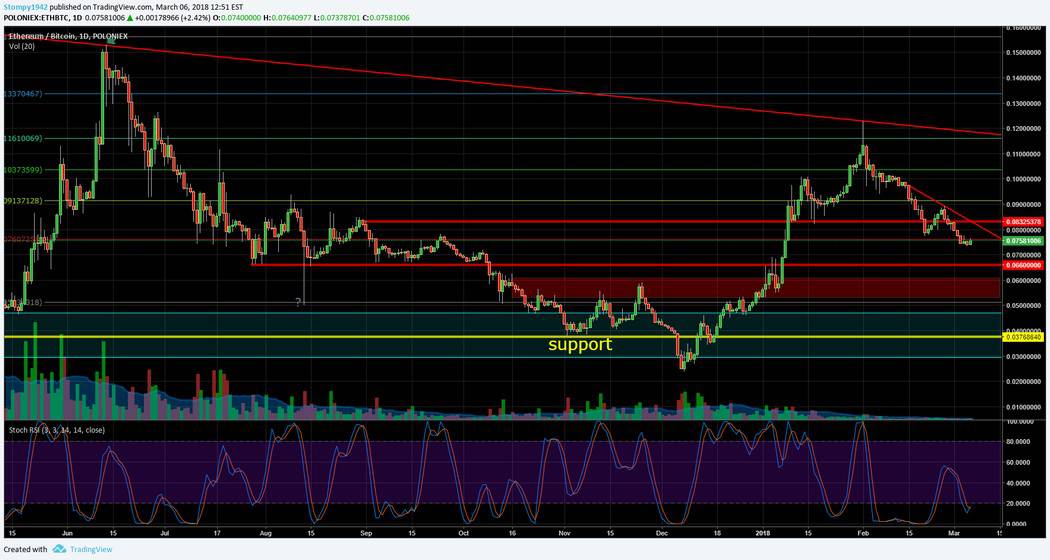 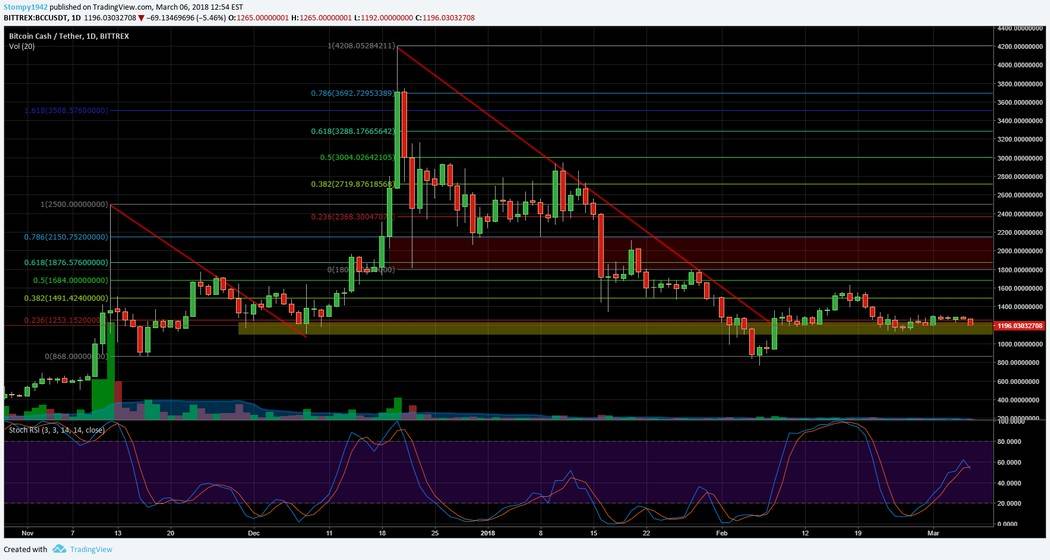 Against Bitcoin, the support around 0.12BTC was breached this week and we seem to have entered a dip trend. Traded around 0.11BTC with resistance at 0.12BTC and support at 0.1 BTC. 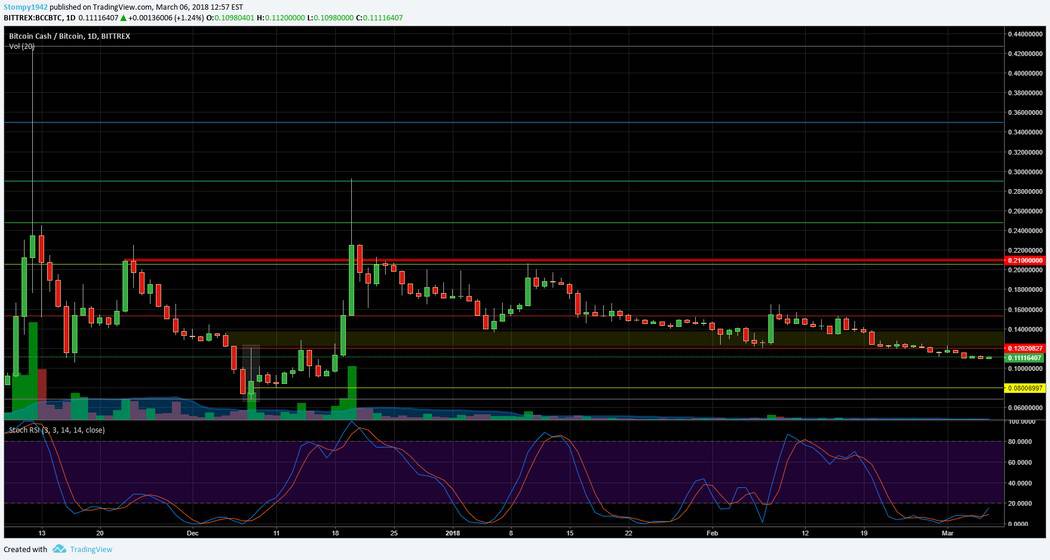 Against the dollar, the red trend line was breached this week. The coin is traded around $340 with resistance around $380 and support in the $320 zones. 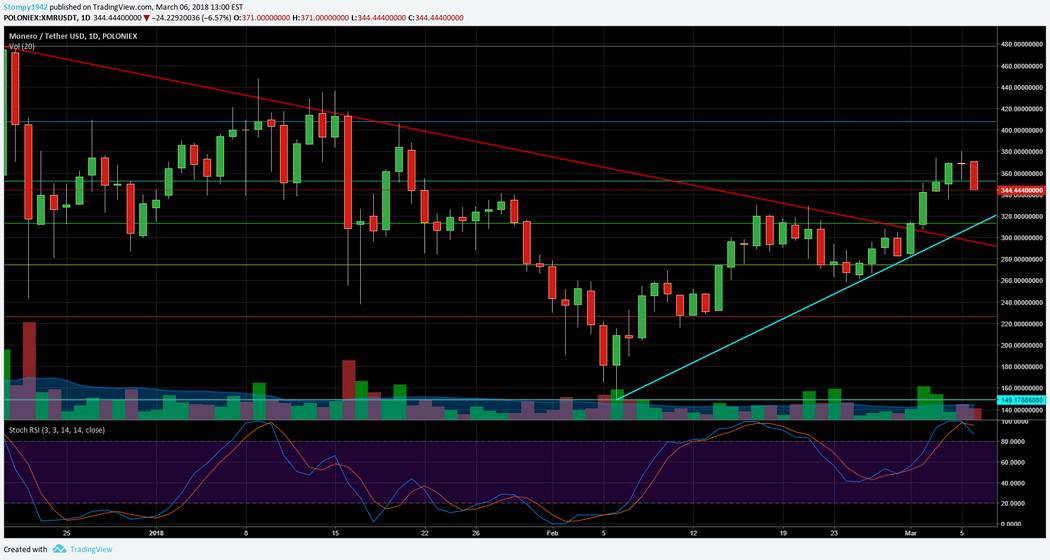 Against Bitcoin – the price traded with resistance levels around 0.032BTC. From this point, we might be able to break up to 0.036BTC levels, very close to the all-time high. Overall, the price appears to be stable and positive compared to the other altcoins at the moment. Additionally trading may be affected by the fork that is expected to take place this month. 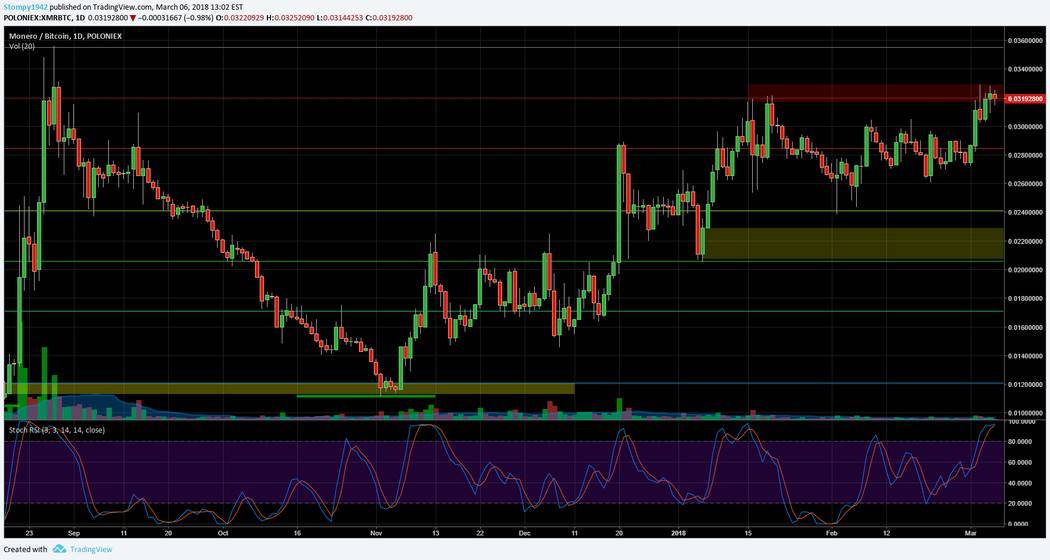 Against the dollar – since its peak in early January, when the coin traded around $1.38, it has started to decline. Recently, it appears that the price is stabilizing in the $0.30 zone. It is currently traded around $0.28 with support in these areas, and resistance in the $ 0.40 zones. 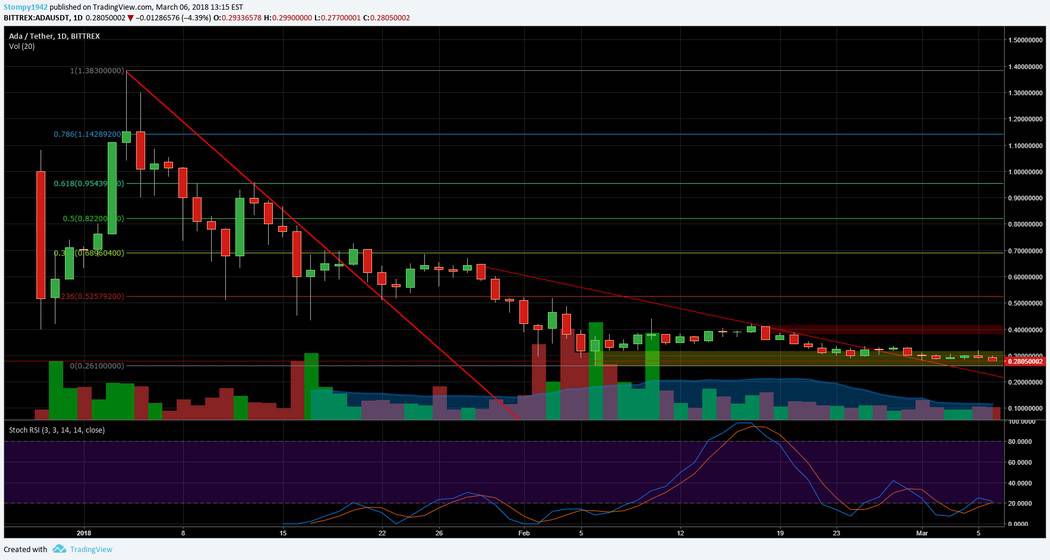 Against Bitcoin, the price is on a downward trend. Traded around 2600 Satoshi, tested at support levels of 2,500 and resistance around 3000 Satoshi. 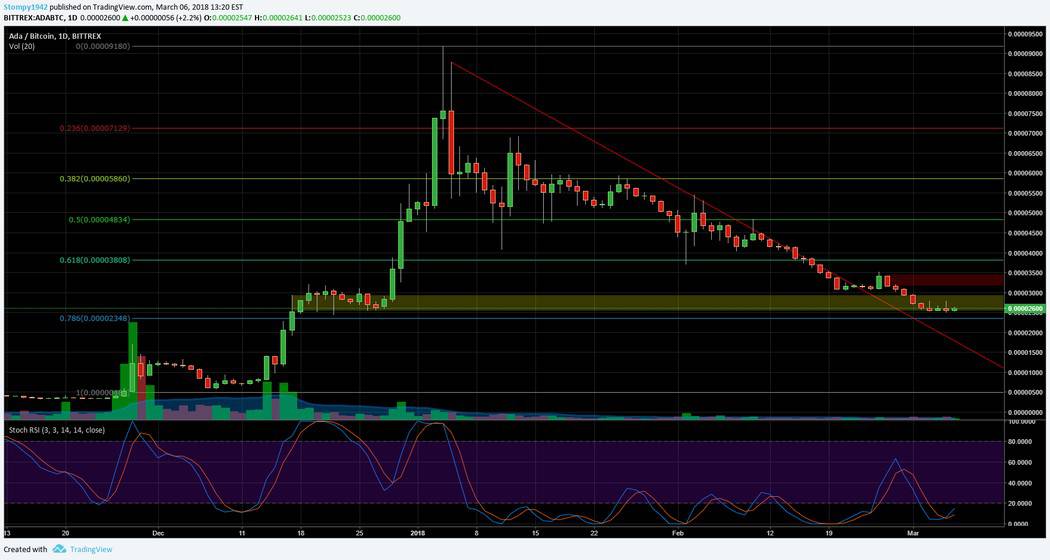 Following The QuadrigaCX Scandal: Canada To Clamp Down On Cryptocurrency Exchanges