When everyone thought that Bitcoin had become a stablecoin and that the Alternative market was beginning to wake up, the trend reversed.

Bitcoin’s price corrected, and declined and the entire market followed. Could this be the effect of a Wall Street correction?

Meanwhile, Tether’s rate has stabilized and is now trading at around $0.993. Although the panic has diminished, there is still a difference between Bitfinex and the other exchanges.

Despite the good news at Ripple, the price has remained relatively stable. It seems that the market is still in pain and is not ready for another Alt’s season.

The October summary appears red. Although there are still two months to the end of the year, it seems as though the entire year will end the same way. Is there any chance of an awakening?

Despite the declines and slanders that returned to the headlines, 2018 brought more recognition than ever as new players entered the field, including various regulators across the world. 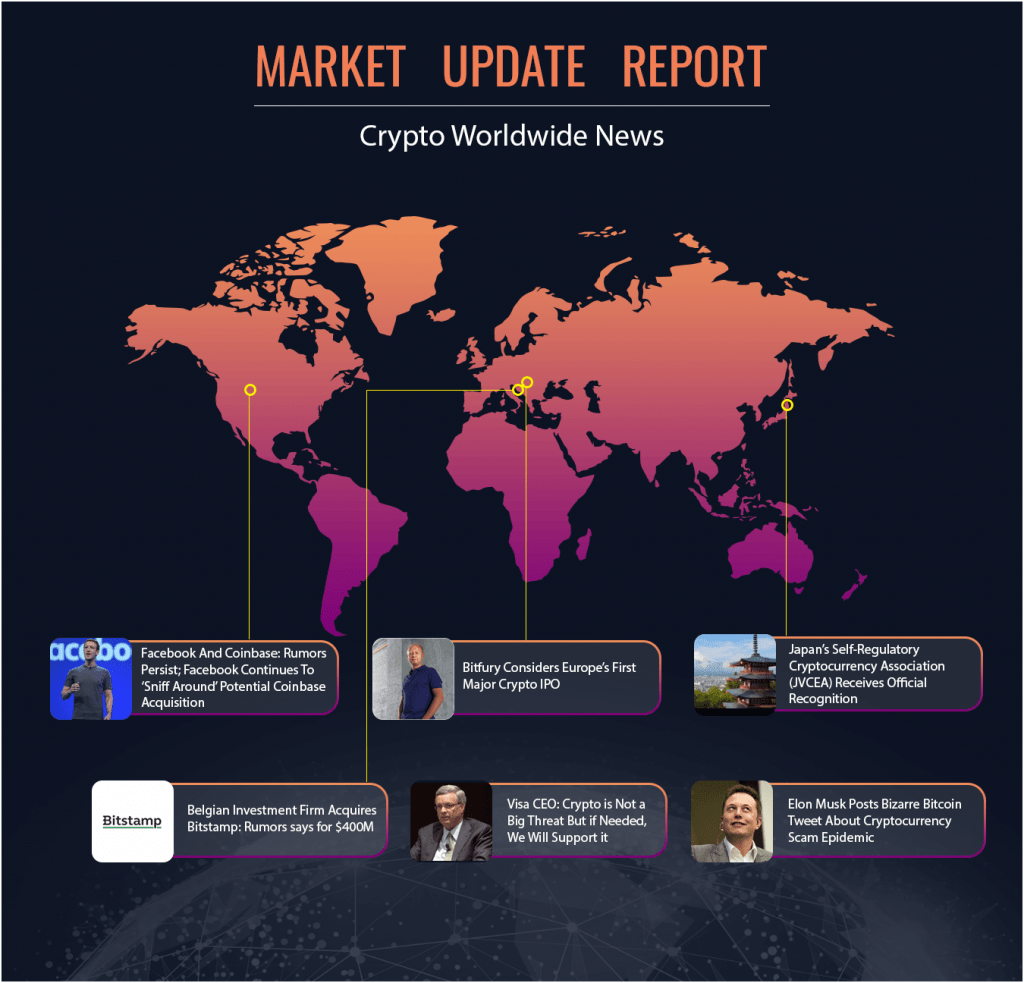 Bitfury Considers Europe’s First Major Crypto IPO. Sources have revealed that the crypto mining startup is eyeing a crypto IPO either in Amsterdam, London or Hong Kong early next year. The estimated funding target will be between $3 billion to $5 billion in two years.

Japan’s Self-Regulatory Cryptocurrency Association (JVCEA) Receives Official Recognition. A body of cryptocurrency exchange owners in Japan has been recognized by the country’s Financial Services Agency. This will allow the body to properly enforce crypto exchange compliance in Japan.

Belgian Investment Firm Acquires Bitstamp: Rumors says for $400 M. In what has become another cryptocurrency exchange buyout, NXMH has reportedly acquired an 80% stake in the Luxembourg-based crypto exchange, Bitstamp. The all-cash deal is believed to be worth a whopping $400 m.

Visa CEO: Crypto is Not a Big Threat, But if Needed, We Will Support it. Al Kelly, the CEO of Visa says they do not see Bitcoin and other cryptocurrencies as a rival to their payment solution but would rather find a way to support the invention if it becomes widespread.

Elon Musk Posts Bizzare Bitcoin Tweet About Cryptocurrency Scam Epidemic. The serial entrepreneur has somehow taken a dig at those who attempt to use his illustrious profile to scam unsuspecting people of their digital assets. He has once again drawn people’s attention to Bitcoin.

FACEBOOK AND COINBASE: Rumors Persist; Facebook Continues To ‘Sniff Around’ Potential Coinbase Acquisition. Even though the San-Francisco cryptocurrency exchange has taken in new capital, rumors about a potential buyout by the social media giant have recently intensified. Some also believe Facebook is planning a new cryptocurrency.

This week we rely on support at $6,100 traded not far around $6,277 and resistance $6,500. We reached the end of the triangle, which seems to have been completed and the market will determine whether we break the triangle or support around $6,000 will hold and will not become resistance.

Against the dollar traded around $198 support and $190 holds resistance standing in this range around $230 and volatility has declined, and trading has stabilized and may be nearing the end of the correction.

Against Bitcoin traded around 0.031BTC Support in this range is around 0.03BTC Resistance at 0.035BTC. We are approaching where it was traded December 2017. Will it hold?

Against the dollar is trading around $420 and it seems that the support for $410 receives additional confirmation that it is the floor. If we break down, we will fall below $400, and the resistance can get stronger there. Resistance lies at $470.

Against Bitcoin trading around 0.066BTC, it is also the support area for this range and appears to be holding resistance at 0.07BTC in this range.

Against the dollar traded around $0.44 resistance in this range at $0.52. After touching the floor around $0.30, there was a sharp rise with high trading volume bringing it up to $0.75. Currently, the rate is still in correction and still holds support.

Against the Bitcoin weekly chart support for 6,000SAT holds resistance range that 7,500SAT. After an ongoing correction from the beginning of the year until September, there comes the first signs of a change in trend.