It has been a bullish weekend in the crypto markets as major coins continue to accumulate new gains in the last trading session.

The total market cap is $239 billion 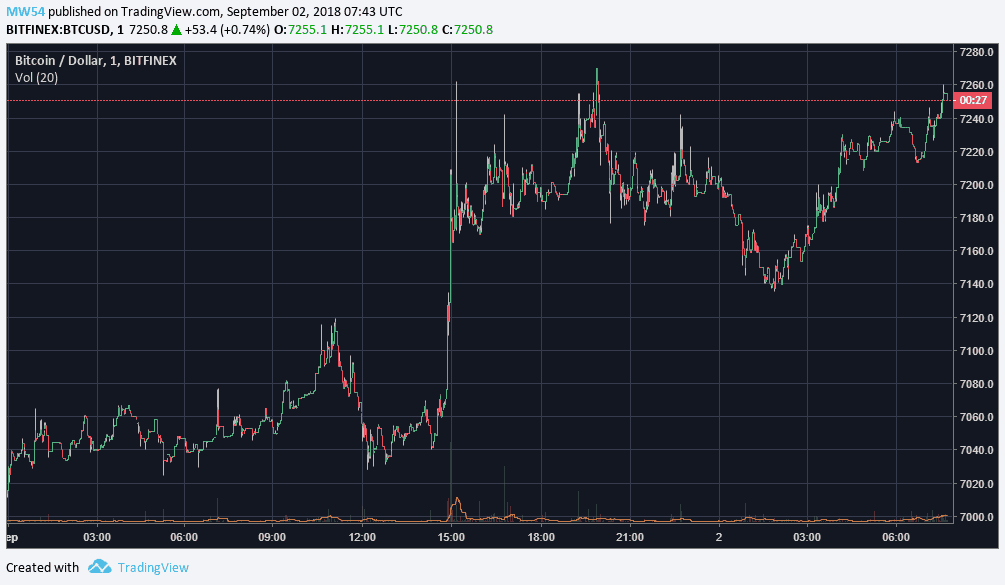 As a majority of the top cryptocurrencies move up to the green side of the market, Dogecoin surged to almost 60% in the last 48 hours. This bullish run came after the news of the launch of a smart contract called Dogethereum. This new protocol, which is a positive development in the crypto industry, will allow individuals to transfer Dogecoins to and from the Ethereum Blockchain, with a trial being scheduled to take place on Sept. 5. At the time of writing, DOGE trades at $0.0054 with a volume of $171,493,816 and a market cap of $665,430,678.

Proxeus (XES) ended the last 24h trading period as the most significant gainers in the green crypto markets. The Proxeus project has been receiving a lot of attention after it was listed as one of the top 15 best new blockchain startups based in Switzerland.  XES, the native currency of the Proxeus blockchain, traded 116.83% higher against the USD in the last 24 hours, and currently selling at $0.035 with a 24h trading volume of $154,777.

OriginSport (ORS) gained over 85% against the USD in the last trading day. At the time of writing, ORS trades at $0.044 with a volume of $4,348,392. ORS could be receiving a lot of attention because new football seasons across the world have resumed. The OriginSport platform allows users to bet on their favorite football teams in some of the most popular leagues in the world, including EPL, Ligue 1, Seria A, La Liga, and Bundesliga. Aside from soccer, OriginSport supports a number of other popular sports.

IGToken (IG) is in the top three of the most significant gainers in the crypto markets over the last 24hrs. IG saw a 79.41% increase against the USD and hovers around a trading price of $0.000591 with a volume of $2,079,746 at the time of writing. This high price valuation came after the project team announced a token burn. According to the news, 473,406,400 IG tokens have been burned and held for promotional purposes and rewards. This has, therefore, reduced the total current supply to 1,267,367,851 IG. There is also news that IG token will be listed on new exchanges for trading activities this week.

AurumCoin (AU) dropped by 97% against the USD in the last trading session. AU currently trades at $31.16 with a volume of $105,996. This drop is a price correction following a pump operation that sent the price shoot to over $1,700, a massive profit for short-term investors.

The Declining Hashrate of Ethereum Increases Chances of 51% Attack, But Is It Possible?

Bitcoin Price Pulls Back, Dragging All Altcoins Down But Binance Coin (BNB)

Anything Besides Bitcoin is ‘Useless’ – Tone Vays and Nouriel Roubini...