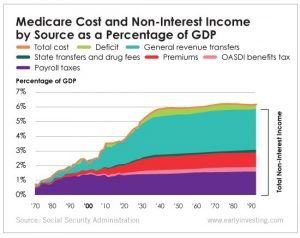 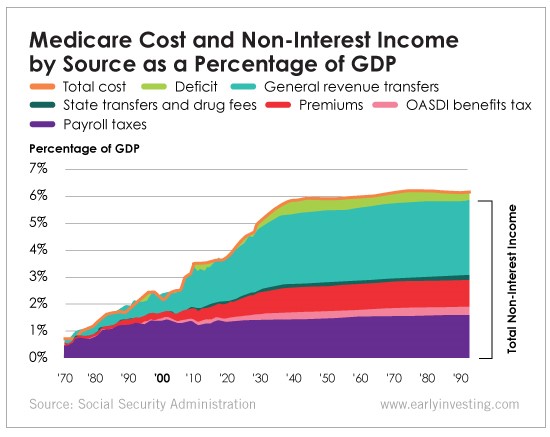 Medicare is limping toward bankruptcy… and it might reach the end of the road sooner than you think.

That’s less than 10 years from now. Once that’s depleted, the Trustees say dedicated revenues will cover 91% of HI costs.

The reason? It’s twofold: Baby boomers are retiring, and the following generations have lower birth rates – and thus a smaller workforce to pay into the system. The growth in expenditures per Medicare user also exceeds growth in per-capita GDP.

In other words, the balance is off. And it’s unsustainable.

We’ve touched often on the topic of the world’s unsustainable debt problem and how the U.S. national debt has reached astounding levels. (It adds up to more than $21 trillion.)

The good news is that cryptocurrency is emerging as a viable alternative to the problems traditional currencies will be facing because of all this debt.

Crypto provides freedom from an inefficient system. It frees you from being tied to irresponsible government spending and the banks and monetary system that finance it. It appreciates in value over the long haul. Its core technology is extremely difficult to hack.

The escalating debt and the threat of total collapse is terrifying… but when the dust clears, crypto will be there to rebuild.

It’s clear that many governments will be forced to print increasing amounts of fiat currency to make up for revenue shortfalls in the near future. Medicare is just one example. The result will almost certainly be major inflation pressure. This is why I believe crypto is truly the future of money. Given a choice, most people will choose a deflationary currency (crypto) to an inflationary one (fiat).

News Fix: Bitcoin Is Back and 12 Governors Are Uniting for Marijuana Reform

Four Assets to Hedge Against Inflation

Naughty and Nice Lists for 2020