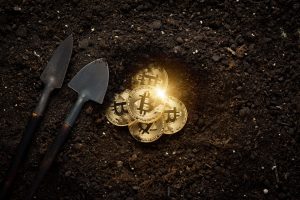 It’s been a wild ride in the cryptocurrency markets this week. From the Department of Justice launching a probe into bitcoin price manipulation… to altcoins being listed and delisted… to bitcoin mining IPOs and new patents, there was a lot to keep up with.

But no matter what you do, make sure you watch this video. It’s the result of artificial intelligence attempting to explain bitcoin. And the key word is attempt. It’s absolutely hilarious.

Now on to the News Fix.

It’s not often that a Department of Justice investigation can be classified as good news. But this might be that rare case. On Thursday, Bloomberg reported that the DOJ, with the cooperation of the Commodity Futures Trading Commission (CFTC), is investigating bitcoin price influencing schemes (Bloomberg).

The CFTC, which regulates bitcoin futures, is involved because it knows more about the trading of bitcoin than any other government agency. It’s also the only government agency that is actively involved in regulating bitcoin trading.

In the grand scheme of things, this is most likely a blip on the radar for bitcoin. The price of bitcoin was barely affected (it was up 0.05% hours after the probe was announced). And more importantly, the crypto markets have been waiting for more regulatory certainty.

Japanese cryptocurrency exchange Coincheck is delisting Zcash, Dash, Augur and Monero (CCN). Investors have until June 18 to get their money out of those coins and into something else. Investors who still have money invested in those coins after June 18 will see their holdings converted into yen.

Coincheck is delisting these altcoins to be in compliance with Japan’s Financial Services Agency (FSA). The FSA has been focused on eliminating anonymous transactions, and Coincheck was worried that offering these coins – which place a premium on protecting the identities of their owners – would violate the new FSA standards.

And if you’re thinking you’ve heard of Coincheck before, you’re right. Hackers stole more than $500 million in coins from Coincheck earlier this year.

It isn’t all bad news for Zcash, however. Gemini, which is licensed in New York, began listing it on its exchange earlier this month.

One More Thing From Japan…

One of the world’s largest banks, Mitsubishi UFJ Financial Group (MUFG), is working with Akamai Technologies to create a blockchain service that can handle 1 million transactions per second (Investopedia). The goal of the service is to handle “traditional” online payments and micropayments. Akamai is based in Cambridge, Massachusetts.

American cryptocurrency exchange Coinbase is at it again. This week, Coinbase acquired Paradex, another crypto trading platform (CNBC). The plan is to integrate Paradex’s offerings into Coinbase’s GDAX platform to create an all-new trading exchange called Coinbase Pro. Coinbase as traders now know it will cease to exist on June 29.

Paradex offers many more coins on its service than Coinbase, which offers just four (bitcoin, Ethereum, Bitcoin Cash and Litecoin). Additionally, Paradex offers direct peer-to-peer trading out of customers’ wallets. Initially, those features will be available only to Coinbase customers outside of the U.S.

The price of bitcoin has been struggling this year. But that’s not stopping Canaan, which claims to be the world’s second-largest hardware supplier for bitcoin mining, from trying to raise $2 billion through an IPO (Reuters via Nasdaq). Canaan’s big focus is on making the powerful computer chips needed to mine bitcoin, according to Reuters.

This will be an interesting IPO to track. You could imagine a $2 billion IPO back in December, when bitcoin was red-hot. But in this environment, that seems like a reach. If Canaan gets anywhere close to that, it will be an amazing show of strength by both Canaan and the larger crypto market.

Permissions aren’t exactly new in the blockchain universe. Hyperledger is a type of blockchain based on the idea that one of the best uses of the technology is giving people “permission” to look at certain parts of the chain – whether it’s medical data, financial records, certification verification or some other use.

But that hasn’t stopped Bank of America from getting a patent on its own version of “permission-based” blockchain technology (Coindesk).

It looks like this patent wants to automate the process of giving users access to view discrete parts of the blockchain.

That’s your News Fix for this week. Have a great weekend!