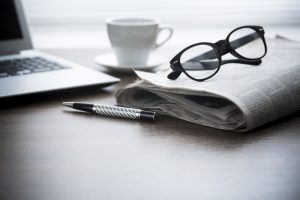 Let’s talk about DARPA (Defense Advanced Research Projects Agency). It’s part of the U.S. Department of Defense. And it’s amazing (in a “holy cow, is it seriously building this stuff?” sort of way).

So what exactly has DARPA built? The internet. GPS. Stealth fighter jets. If this was a holiday party, DARPA would be the guest everyone was envious of.

DARPA is now turning its attention to crypto and blockchain protocols. (FedBizOpps) The key text of the notice is worth reading…

I would love to be a fly on the wall at the DARPA blockchain workshop. DARPA clearly understands the potential of blockchain and consensus protocols. What I want to know is what it’s thinking about doing with that potential…

This is going to be a fun journey. Now on to the News Fix!

The crypto markets are down. But institutional investors are lining up to enter them. The latest entrants? Nasdaq Ventures (Nasdaq’s investment arm), Fidelity, TD Ameritrade, the Chicago Board Options Exchange (CBOE) and Valor Equity Partners.

These heavy hitters have invested in ErisX, a new crypto exchange that will include spot and futures markets for bitcoin, ethereum and litecoin. Nasdaq and Fidelity invested in the most recent round of funding. TD Ameritrade, CBOE and Valor invested in an earlier round. ErisX is slated to launch next year. (Reuters)

ErisX isn’t Fidelity’s only crypto play. Earlier this year, the investment giant spun off a separate company to invest and trade in cryptocurrencies for institutional investors. (Early Investing)

The endowments for Harvard, Stanford, MIT, Dartmouth and the University of North Carolina have reportedly invested in crypto. (The Information) So has Yale. (CNBC)

And Bakkt, a crypto exchange operated by the parent company of the New York Stock Exchange (NYSE), is slated to launch next month.

So why is the big and smart money lining up to invest in crypto during a down market? Because it knows that crypto is here to stay. And it knows that it’s a rare opportunity to get into a market before it matures. That’s where the biggest gains are.

The same thing happened when the dot-com bubble burst. Retail investors fled the market. Institutional investors recognized the internet was here for good and started buying and investing. Now stocks like Amazon and Google (Alphabet) are among the most valuable in the world.

That’s why we look at crypto as a serious long play. Apparently Fidelity, Nasdaq, the NYSE, Harvard, Yale and Stanford (among others) all agree with us.

Coinbase is allowing customers in a handful of countries to link their PayPal accounts to their Coinbase accounts. So far, you can use PayPal only to cash out. (News BTC)

In a nasty piece of work, 415,000 routers have been infected with malware designed to secretly mine crypto. Most of the affected routers are in Brazil. (TNW)

And if you’re booking a hotel using Tripio, you can pay using Binance Coin (BNB). You can make reservations at more than 450,000 hotels worldwide using Tripio. (CCN)

Recreational marijuana is now legal in Michigan. Thursday was the first day you could legally grow and use cannabis for personal use in the state. I updated our First Stage Investor subscribers on those details and on New Jersey’s push to legalize marijuana in a special video update earlier this week. You can subscribe to First Stage Investor by clicking here.

MüV, a medical marijuana company in Florida, recently suffered a data breach. The company’s website is still down. (Florida Politics) This is an important reminder that data breaches don’t happen to just big companies like Starwood. They happen to companies of all sizes and in all sectors. And any company that’s serious about doing business today needs to take data integrity seriously.

I will be breaking down the Utah legislation in its entirety for our First Stage Investor members next week (did I mention that you really should sign up?). But here’s a preview: I’m not a fan of undermining democracy.

Mailbag: Open-Source vs. Private Blockchains, SEC Delays
How Will We Deal With All the Debt?
Bitcoin Mining Is Greener Than You Think
The “Why” of Bitcoin and Cryptocurrency
Q&A: Make Sure You Avoid These Investment Mistakes
2020 Halving Will Bring Bitcoin’s Inflation Rate Down
Why Big Budgets Can Lead to Low Returns
Startup Investors: Watch Out for These Five Red Flags