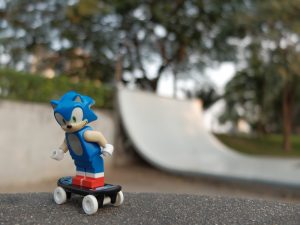 Granted, this week’s good Ethereum news came on the heels of some really bad news affecting the markets. But sometimes, timing is everything. The good news (for a change) is the most recent. And the market is reacting favorably. On CoinMarketCap.com, it’s almost all green numbers. Only three coins (out of 100) are down over the last 24 hours (as of this writing), and those three are barely down.

After the week we’ve had, that’s cause to celebrate. And now let’s get to the News Fix.

Okay. So if you read last week’s News Fix (Early Investing), you get why bitcoin isn’t a security and why Ethereum might have been a security. Even the SEC chief wasn’t ready to go on record and say it wasn’t a security.

So what changed between last week and this week, when a (slightly) lower level SEC official said Ethereum wasn’t a commodity?

Well, the SEC thought about it some more. And its logic makes complete sense.

SEC Director of Corporation Finance William Hinman announced his reasoning in a speech at the Yahoo Finance All Markets Summit: Crypto in San Francisco.

Hinman also suggested that there might be future instances, like Ethereum, where coins that show sufficiently decentralized control don’t need to be regulated by the SEC.

Remind Me Why I Care

You care because it makes it easier and cheaper to trade bitcoin and ethereum if the exchanges don’t have to follow SEC regulations on those trades.

But Wait, Don’t We Want Regulation?

Yes. We do want regulation. We need regulation. That became clear this week when a report by a respected researcher from the University of Texas found Tether was used to shore up and goose bitcoin prices during crypto’s 2017 bull run (CNBC).

The details are technical. But it doesn’t matter. What matters is it looks like the market was manipulated. That’s a bad thing. That’s why we need regulation. And that’s the same conclusion the researchers reached.

“Our findings suggest that market surveillance within a proper regulatory framework may be needed for cryptocurrency markets to be legitimate stores of value and a reliable medium for fair financial transactions,” the researchers wrote (Entrepreneur magazine).

So yes, we want regulation. But we want a light touch. The Commodity Futures Trading Commission (CFTC) seems to have that lighter touch – making its regulatory approach a better one than the SEC’s.

Speaking of the CFTC…

Remember when the Department of Justice launched that probe – in cooperation with the CFTC – into bitcoin price fixing a couple of weeks ago (Early Investing)?

Apparently, the investigation was launched because the Chicago Mercantile Exchange, which offers bitcoin futures, didn’t get the trading information it wanted from the different bitcoin exchanges it works with (Bitcoin.com).

As Andy Gordon notes, the first instinct of most crypto enthusiasts and true believers is to not cooperate with the government (Early Investing). And there can be good reasons for that (like overly broad subpoenas). But at this point, figuring out how to cooperate with regulatory bodies is more important than not cooperating at all. It can mean the difference between a light regulatory touch and a criminal probe.

It’s Not All About Bitcoin

Yes, we know there’s more to investing and life than cryptocurrencies. That’s why this next trend is so interesting. Startups are trying to make banking cool again. And not just any sort of banking. We’re talking checking and savings accounts here (Bloomberg).

SoFI Money has launched a hybrid checking/savings account. And micro-investing portal Stash is launching a bank account with no overdraft fees.

If there’s anyone that can make checking accounts cool again, it’s Silicon Valley.

But no matter how hard Silicon Valley tries, it won’t be able to top the cool factor of the Sonic the Hedgehog toaster. That’s right, Sega is selling a toaster that toasts/burns Sonic onto your bread (Polygon). Sega needs a minimum of 1,000 orders to make the toaster a reality. As of this writing, it has 522. I have no idea how the bread will taste after you run it through this toaster. But the resulting toast looks pretty nifty.

3 Reasons Why Ethereum Is A Better Investment Than Bitcoin, According to Brian...