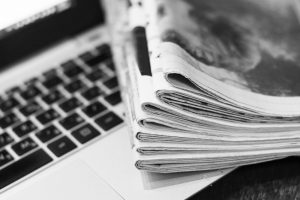 It’s official. You can divide modern history into two eras – pre-Amazon and Amazon.

In the pre-Amazon era, people shopped at Sears or Kmart for everything except food, books, music and cars. They bought books from Barnes & Noble, Borders and independent bookstores. And when someone did something of note (or retired), they were given a Rolex watch.

In the Amazon era, people shop at Amazon for everything except cars. Borders is out of business. So are most independent bookstores. Barnes & Noble is declining. Sears and Kmart, which have now merged, are dying. And when someone does or achieves something of note, their reward isn’t a Rolex. It’s Amazon stock.

If you want proof, look no further than Seattle Seahawks quarterback Russell Wilson. Wilson, who has won one Super Bowl (and would have won a second if they’d just handed the ball off  to Marshawn Lynch) and has helped legitimize “small” quarterbacks in the NFL (Kyler Murray should seriously buy him dinner), just signed a four-year $140 million contract extension. The deal includes an NFL record $65 million signing bonus. And $107 million of his contract is guaranteed (CBS Sports).

Like many smart quarterbacks who have signed big contracts, Wilson decided to share his good fortune with the teammates who protect him from major injury – the offensive line.

But Wilson didn’t treat his offensive line to dinner or buy them Rolexes. That’s pre-Amazon thinking. Instead, he bought them each $12,000 worth of Amazon stock. Total cost: $156,000.

Hemp farmers get intellectual property protection: For years, farmers have been able to “patent” new seeds and plants they create and grow through a special U.S. Department of Agriculture (USDA) program. Now that hemp is legal, the USDA is giving farmers that same ability to protect any new hemp seeds and plants they might create (Marijuana Moment).

This is a huge step forward for hemp farmers. Without intellectual property protections, there is no incentive to create better hemp plants and farming techniques.

This is a big deal for the cannabis industry. A global supply chain could really drive the cost of marijuana down. And it could force many countries to either open their doors to foreign marijuana to comply with existing trade agreements or create new trade deals to address the issue.

Weed stench a growing concern: A new survey shows that even though Americans and Canadians favor marijuana legalization, they aren’t really thrilled about being able to smell weed in public. A new PSB Research and BuzzFeed News survey found that 23% of Americans believe the smell of marijuana in public is a major problem, while 28% believe it’s a minor problem. In Canada, 60% of people think the smell of marijuana is either a major or minor problem (BuzzFeed).

Whenever something new is introduced to society, there are usually growing pains. And inevitably, there’s some sort of backlash as well. We’re not sure where on this continuum weed stench sits, but it’s something to keep an eye on.

Beyond Meat’s valuation may top $1 billion: Uber’s upcoming initial public offering (IPO) is getting all the attention. But there are other companies going public this year. And some of them have valuations you might not be expecting.

Beyond Meat, which creates meat substitutes designed to cook and taste like the real thing, is one of those companies. It had $87.9 million in revenue last year. It had just $16.2 million in revenue in 2016. And it could go public in early May with a $1.2 billion valuation (CNN).

In a weird twist, Tyson Foods used to be a major investor in Beyond Meat. It even had a seat on Beyond Meat’s board. But when Beyond Meat found out Tyson was creating its own meat substitute line to compete with Beyond Meat, tensions started to brew and Tyson eventually sold its stake in the company (CNBC).

Don’t expect startups to catch IPO fever: At Early Investing, we’ve been telling you for a long time that startups are staying private longer than ever before. There’s so much private investor money floating around that they don’t need to go public to raise capital. And most startups don’t want to deal with the compliance issues or public scrutiny that can come with going public. So they stay private as long as they can.

Samsung continues to invest in crypto: Earlier this year, Samsung added a wallet to its Samsung Galaxy S10 phone (Early Investing). This week, Samsung began wading into the deep end of the crypto pool with a $2.9 million investment in Ledger (CoinDesk). Ledger produces some of the most popular hardware wallets in crypto.

It’s also being reported that Samsung is interested in launching its own blockchain and cryptocurrency based on ethereum (CoinDesk). If that comes to fruition, it could potentially mainstream blockchain tech and crypto – especially in Asia.

Bitfinex in trouble: New York’s attorney general is suing Bitfinex for a whole host of shenanigans. The state is alleging that Bitfinex is accepting customers and transactions from New York, which it’s not supposed to. Bitfinex is also accused of draining $700 million from Tether’s reserve funds to cover up the fact that it had lost money (or lost access to money) that was supposed to be sent to customers (The Block).

Tether is a stablecoin pegged to the dollar. And predictably, crypto markets dipped as this news broke.

Coinstar adding bitcoin to the mix: More than 2,000 Coinstar machines in 19 states are being outfitted to allow customers to buy bitcoin. Coinstar says the service has been popular and its customer base is growing as a result (CoinDesk).

And finally, the Fix is hearing great things about the new Avengers movie. Unfortunately, the Fix won’t be watching it until next Friday. Undoubtedly, many of you know people in similar predicaments. So for the sake of your friendships, no spoilers until next weekend, please. Your thoughtfulness will be appreciated.

How to Cope With a Lack of Startup Updates

Just the Tip of the Wall Street Iceberg