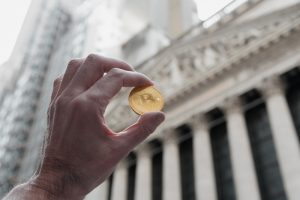 When that happens (and it’s when, not if), billions of dollars will flow into crypto. And that’s just the floor. We showed you why on Monday and on Wednesday. And if you’re a loyal reader of the News Fix, you’ve been seeing signs of this every weekend.

Okay, on to the News Fix!

Institutional Money Gets a New Option

Institutional investors have a lot of money. So when they invest, they tend to do it in a big way. Buying $1 million in stock is fairly straightforward now because the infrastructure has been put in place to make it happen seamlessly. Buying large volumes of crypto isn’t as easy – yet.

That’s why a startup named SFOX is so important. SFOX has figured out a way for institutional investors to buy large amounts of crypto virtually in secret. SFOX focuses on making over-the-counter trading (which is fairly analogous to peer-to-peer trading) as efficient and pain-free as possible (Forbes).

So why are some of the richest, smartest investors in the market backing SFOX? It’s simple. They see the same things we see – that institutional investors are ready to move into the crypto markets in a big way. They just lack the infrastructure to do so.

With the price of bitcoin dropping this year, many people assumed that bitcoin miners would struggle to churn out a profit. That was a bad assumption.

Even as bitcoin prices have fallen, mining activity (as measured by the hash rate) has increased. That means mining is still profitable. It also means the big bitcoin miners have become really good at it. The more efficient they are in mining, the lower their costs – making it profitable for them to mine bitcoin at lower prices (Bloomberg).

So how did bitcoin miners become so efficient? Part of the story is large mining firms invested heavily in top-notch hardware, including NVIDIA chips. These powerful chips helped miners scale up last year – and helped NVIDIA’s bottom line.

But NVIDIA has seen a decline in the sale of chips to miners this year (MarketWatch). Why? Probably because the miners have all the chips they need to handle today’s volume. When demand spikes again, so will NVIDIA’s sales.

The Daily: Husbands Blackmailed for Bitcoin, Blockchain This and That