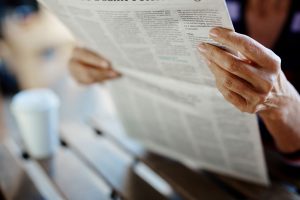 In the era of Amazon and Uber, we hear a lot about companies that never seem to stop growing. More users, more market share, more investor dollars…

But what happens when a company ends up with more dead users than living ones?

That’s what Facebook will eventually have to deal with. The social media giant currently has more than 2 billion users worldwide. But an estimated 8,000 users die every day. University of Oxford academics predict dead Facebook users will outnumber living Facebook users by 2069.

In addition to conjuring images of an army of wights, this poses interesting questions for Facebook and other social media sites. What happens to a user’s content when they die? What about their data? Will their profile be memorialized? Deleted? Or will it just linger on, never to be updated again?

It also raises questions for users. Should we be creating digital wills? Do we even want our digital profiles to exist in perpetuity?

The Fix doesn’t have the answers to all these questions. We just know that in an era when we share so much of ourselves online, we have to change how we deal with death. Because we don’t just leave behind material possessions, but our entire digital selves.

Pax initially planned to raise around $150 million, but strong demand from investors pushed the raise higher. It’s yet another indicator that the floodgates are opening in the cannabis market. And institutional investors want in.

“The lack of basic science research enables people to make claims in a vacuum that are either anecdotal or based on old science,” Broderick told The Boston Globe. “For generations we haven’t been able to study this thing for various sorts of societal reasons. That should end now, as well as the prohibitions that are falling around the world.”

Oregon freezes legal marijuana supply: Oregon lawmakers have voted to freeze cannabis production at current levels for the next two years. The state won’t issue production licenses to new growers, but current growers will be able to renew theirs (Leafly).

The reason? Sen. Michael Dembrow said the state produces so much marijuana, it has enough to last it for the next 6.5 years. And the oversupply has caused prices to plummet.

While the Fix appreciates the fact that a 6.5-year supply of marijuana feels like a bit much, the markets – not the government – should be settling this issue.

Beyond Meat soars on its initial public offering: Beyond Meat, the plant-based meat substitute producer, had a massive IPO on Thursday. Its shares rocketed 163% by the end of its first trading day. It was the biggest one-day pop for a company with a market cap of at least $200 million since 2000.

Tesla is raising $1 billion-plus through convertible note and share sale: Tesla is selling up to $1.5 billion in convertible senior notes. The company expects to receive between $1.3 billion and $1.5 billion from the sale, depending on whether investors choose to purchase additional shares in a $202.5 million over-allotment option (TechCrunch).

The sale comes a week after Tesla reported $702 million in losses in the first quarter, more than analysts expected. But the first quarter losses follow two consecutive profitable quarters.

The raise comes about a month after a16z transitioned from a venture capital firm to a registered investment advisor. The change frees the company up to explore a variety of investments.

Adam Sharp has written extensively about a16z’s firm crypto belief. We know it’s a smart firm that invests for the long term. So we’ll definitely be watching where it goes from here.

Of those with exposure, most made their digital asset investments within the last three years. This is exciting news. It’s further evidence that the institutional investor floodgates are beginning to open… and it’s a great time to be an early crypto investor.

It is challenging work, and we welcome other central banks to join us in this global collaboration, to bring benefit to consumers, businesses and the broader financial industry.

It’s a big moment for blockchain… but perhaps a bigger moment for central banks. If more banks embrace blockchain technology the way MAS and BoC have, it could have a major impact on the financial world. Then again, we’re talking about entrenched mega-institutions trying to harness the power of a brand-new and agile technology. So the jury’s out on how that will end up…

Facebook recruiting firms for its crypto-based payment system: Remember Facebook’s super-secret crypto project? The company is now recruiting dozens of financial firms and online merchants to help launch a crypto-based payment system (The Wall Street Journal). The project aims to create a digital coin that Facebook users can send to each other and use to buy things on Facebook and elsewhere on the internet.

It’s an enormous undertaking… and it could upend the e-commerce payments infrastructure.

Let’s just hope that if the project succeeds, Facebook creates a solid infrastructure – including a way for users to posthumously transfer their coins to loved ones.

Accredited Investors Have the Advantage — For Now