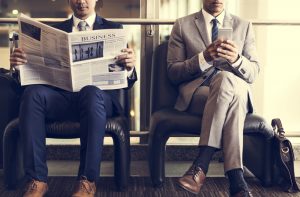 Happy Saturday! The only people who hate Robinhood more than the Sheriff of Nottingham are the financial establishment. Robinhood started with no-fee stock trading. It later added crypto. Now it’s expanding into no-fee banking. No overdraft fees. No minimum deposits. None of the stuff people hate. But what’s really driving the banks nuts is that Robinhood is offering a 3% interest rate on deposits. That’s more than three times the average rate offered by banks. (Reuters)

The News Fix missed the original sign-up window. We won’t make that mistake twice. Now on to the Fix!

Looks like 2019 is going to be a big year for tech initial public offerings. Slack (Fortune), Uber (Recode) and Lyft (CNBC) plan on going public next year. There’s talk that Pinterest and Airbnb will join them (Crunchbase).

According to Crunchbase, Uber, Lyft, Airbnb and Pinterest have a combined valuation of more than $130 billion as of right now. That number will likely rise after they go public.

Cigarette maker Altria (Marlboro, Virginia Slims, Parliament, etc.) has increased its minority stake in Canadian marijuana company Cronos. Altria paid $1.8 billion to get a 45% stake in Cronos. Altria has the option to increase its ownership share to 55% in the next five years.

Altria’s investment in Cronos isn’t surprising. The tobacco company has been looking to diversify its holdings as the number of people smoking worldwide continues to decline. Altria’s move is also similar to Constellation Brands’ investment in Canopy Growth, another large Canadian cannabis company (Seeking Alpha). Constellation makes Corona and Modelo beers, among other things.

Altria may not be done with its acquisition in cannabis – or cannabis-adjacent markets. It’s reportedly in talks to acquire a stake in Juul, which produces an extremely popular vaping system (CNBC).

Usually, when Andreessen Horowitz, Lightspeed Venture Partners, GV (the venture capital arm of Alphabet) and Bain Capital invest in something, you can take it to the bank. The key word in that sentence is “usually.”

This illustrious group invested in Basis, which had the makings of a cool stablecoin. Then Basis started to receive word from regulators that its original plans (and revised plans) wouldn’t meet regulatory muster. So Basis pulled the plug on the project.

Basis is returning the unused portion of the $133 million it raised back to investors (Fortune).

While we’re sad to see this project go, there are other good ones on the horizon. We’ll report the latest developments as we see them.

Government Regulations Are Creating Investment Opportunities
A Surprising Silver Lining for Investors
Buy Pot Stocks While Prices Are Low
Mailbag: To Short or Not to Short
Silver Linings
Massachusetts Vape Sales Plummet in Light of Health Concerns
Rhode Island Fears Missing Out, Ethereum Classic Gets Some Money Back
Startups Can Help Fight the Coronavirus