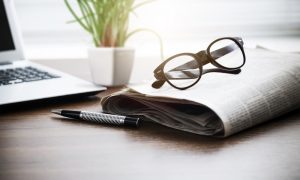 On Friday, the Food and Drug Administration (FDA) held its first public hearing on regulating cannabis. The hearing was intended “to obtain scientific data and information about the safety, manufacturing, product quality, marketing, labeling and sale of products containing cannabis or cannabis-derived compounds.”

A wide variety of industry reps presented their cases to the FDA, including professionals in healthcare, agriculture, manufacturing, public safety and retail. Patients and government officials also had a say.

One speaker was Andy Snyder, founder of Manward Press. Andy is a good friend of ours. We have a lot of respect for him and all the work he’s done to build his company. And we share an interest in cannabis.

So we were thrilled to hear that Andy was taking his pro-cannabis case to the FDA. Here’s an excerpt from his testimony:

While the evidence supporting both the safety and efficacy of CBD continues to pile up, response at the federal level has been slow at best and nonexistent at worst… We’re talking about a safe, natural compound with seemingly endless benefits for users. One with very little, if any risk of significant downside. For my money, CBD may be one of God’s greatest gifts to mankind and the pursuit of health. It’s outrageous that corporate greed and red tape have forced most Americans to spend the last eight decades in the dark.

A number of other speakers echoed Andy’s sentiments. Others argued that marijuana is dangerous and addictive.

At the end of the day, it’s a good sign that the FDA is opening up the cannabis conversation. The government moves slowly, but sometimes change has to happen one step at a time.

The bill will allow adults 21 and older to consume, possess and purchase certain amounts of cannabis for personal use. It also aims to create a legally regulated system of marijuana production and sales. The bill also contains several provisions aimed at promoting social equity in the legal industry, including expunging the records of people with convictions for marijuana possession of 30 grams or less.

Stripe’s investment shows an expanding interest in the publishing industry. The company publishes an engineering magazine and has formed Stripe Press, which produces books on startups and engineering.

Talkspace is one of many mental health-focused startups that have been emerging over the years. Calm, a meditation startup, raised $88 million in February at a $1 billion valuation. And it was named Apple’s iPhone App of the Year in 2017.

The regulator specified that if a crypto asset is a financial product, then the issuer and the firms dealing with it are required to hold an Australian financial services license. The report also notes that miners will be considered part of the clearing and settlement process in some cases.

Kik launches crowdfunding campaign for SEC fight: Kik, a Canada-based messaging app, has launched a crowdfunding campaign to fund a court battle with the Securities and Exchange Commission (SEC) over its 2017 ICO (CoinDesk). The battle comes after the SEC said Kik’s kin token might be a security, not a currency as Kik claims.

But its fight is bigger than that. Kik’s “Defend Crypto” website explains that the case will impact the entire industry, setting a precedent for cryptocurrency regulation in the U.S. And it could serve as a new Howey Test (a test to determine whether certain transactions qualify as investment contracts).

Kik has raised more than $5 million so far and is accepting donations in the form of 19 different cryptocurrencies.

Another copyright claim for bitcoin white paper appears: We’ve all heard about Craig Wright, who has claimed to be the creator of bitcoin and who has faced his share of skeptics. But another contender has entered the legal fight over Satoshi Nakamoto’s white paper. A copyright registration for the bitcoin white paper was filed on May 24. The registration lists Wei Liu as the author of the pseudonymous paper (CoinDesk).

It’s not clear who Wei Liu is or why the registration was filed. But one thing is clear to the Fix. Wright has made legal threats against those who dispute his claim to the Satoshi name. And he still hasn’t been able to provide indisputable proof for his case. So if Wei Liu (or someone else) wants to throw in a counterpunch, it could be illuminating at best… and entertaining at worst.

The post News Fix: The FDA Opens Up the Cannabis Conversation appeared first on Early Investing.

What Cannabis Businesses Need to Learn From Curaleaf and Icarus

A Surprising Silver Lining for Investors