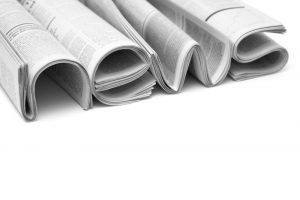 In case you’ve missed the thousands of TV, radio and newspaper stories about it, Monday is the deadline for filing your federal tax returns.

In theory, the IRS should have a TurboTax-like service to help all Americans file (and pay) their taxes. But it doesn’t, because TurboTax (and other tax preparers) don’t want us to have nice things (ProPublica).

The tax preparation industry is worth at least $11 billion. And it doesn’t want the IRS undercutting its business model with a good, reliable and inexpensive (or free) way to file taxes online.

For years, there has been temporary legislation that prevents the IRS from creating a TurboTax-like product for the masses. Now Congress is considering permanent legislation prohibiting the IRS from ever releasing a product that could compete with tax preparation software. That will give the tax preparation industry complete control of the market.

There’s something a bit perverse about forcing Americans to pay for the right to pay taxes.

People in Congress weren’t elected to create a monopoly for TurboTax and H&R Block. They were elected to fix our tax system – including how we file and pay for taxes. Congress needs to stand up and protect the rights of its taxpaying citizens before it’s too late.

Home delivery heads to court in California: In California, it’s legal to buy weed online (from a California company) and have it shipped to your (California) home. But local communities have the right to bar the sale of marijuana in their towns. And cities and towns want to ban pot home delivery based on the theory that home delivery implies the sale is happening in their community, which they have a right to regulate. So 25 local governments are suing the state to prevent home delivery. The state maintains that pot is legal in California, and there’s no difference between driving to the next town to buy it and getting it through home delivery. This battle has the potential to shape California’s (potentially) massive marijuana market (WTHR).

Arizona cannabis company makes an acquisition: Harvest Health & Recreation has bought CannaPharmacy. The deal terms have not been disclosed. Harvest Health is a vertically integrated cannabis company (which means it grows pot, processes/manufactures it for consumption and sells it in dispensaries) based in Arizona. CannaPharmacy has grow operations in Pennsylvania and dispensary operations in New Jersey (Philadelphia Business Journal via NBC 10).

Colleges beginning to offer cannabis degrees and courses: You can’t run or grow a marijuana business without skilled and talented workers. But workers with experience in growing, manufacturing and selling pot are hard to find these days. The first states to legalize pot snapped up most of the talent. So as new states legalize marijuana, they’re finding there aren’t enough experienced or qualified workers to fill the jobs created. So colleges and universities are hustling to fill the void with cannabis courses and degrees (Chicago Tribune).

Deadline looming: Michigan is trying to close down unlicensed marijuana operations by June 1 (Detroit Free Press). Some of the temporary (and unlicensed) operations still running are trying to avoid regulatory and compliance costs. But a good chunk of these temporary operations say they have either been denied licenses improperly or faced delays (by the state) in the licensing process.

Tennessee stays on the sideline: A medical marijuana proposal in Tennessee has been shelved because it doesn’t have enough support to get through the Legislature (Nashville Public Radio).

Uber prospectus filled with juicy details: Uber is getting ready to go public. And its initial public offering (IPO) prospectus has some interesting tidbits. Uber reported $11.27 billion in revenue in 2018 (up 42% from 2017) with an adjusted EBITDA (earnings before interest, tax, depreciation and amortization) loss of $1.85 billion. Two of its bigger shareholders are The Public Investment Fund (Saudi Arabia’s sovereign wealth fund) and Alphabet (Google). And it had $11.48 billion in gross bookings in the fourth quarter of last year (CNBC).

Pinterest going public with a down round: The high end of Pinterest’s IPO range values the company at $11.3 billion. That’s down from its $12 billion valuation at the end of 2017 (The Washington Post).

Dental startups showing promise: Investors look like they’re still interested in straight teeth – or at the least the companies that make them happen. Candid, which uses 3D printers to make its aligners, just raised $63.4 million in a Series B round. Candid has raised $90 million to date. Candid’s competitor, SmileDirectClub, is eyeing an IPO. SmileDirectClub’s valuation as of last October was $3.2 billion (TechCrunch).

Token sales find a new home in the U.S.: Blockstack is planning on offering an SEC-approved token sale. The decentralized computing project is taking advantage of private equity crowdfunding regulations with a Regulation A+ raise. Blockstack hopes to raise $50 million through the offering (CoinDesk).

Institutional demand rising: Harvard’s endowment has invested between $5 million and $10 million in Blockstack’s token sale (CCN). Harvard’s endowment is one of the biggest and best-managed funds of its kind. And it’s proof that the (really) smart money is moving into crypto.

Coinbase debuts Visa debit card: Coinbase customers in the U.K. can now fund a prepaid Visa card using their Coinbase account. The new Coinbase Card can be used to make purchases worldwide. And a mobile phone app for the card tracks purchases and provides access to receipts (Cointelegraph).

Equity Crowdfunding’s Role Could Expand During the COVID-19 Crisis

The Convergence of Stocks and Cryptocurrency

Bitcoin Price Analysis April 13: Bitcoin Seems Steady Above $5000. But, What’s... Bitcoin and the Crypto Market Has Bottomed Out: Binance Research
Scroll to top