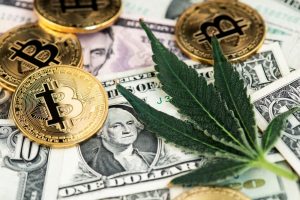 Startups. Cryptocurrencies. Cannabis. That’s what we do here at Early Investing. Our goal is to teach you how to invest like venture capitalists in these three sectors. Early Investing Co-Founder Adam Sharp explains why in a terrific and very personal piece published yesterday. And today, the News Fix begins with something we rarely see – two companies sitting at the intersection of bitcoin, cannabis and startups.

Arizona has given startup Alta the green light to begin working on its crypto payment service for the marijuana industry. Alta is developing a stablecoin that marijuana consumers can use to buy legal marijuana. The company is building a complete financial services ecosystem so people can buy Alta without having to use their bank account (CoinDesk via Yahoo Finance).

This could be a major development in the cannabis industry. Because marijuana remains illegal at the federal level, the industry has difficulties accessing the banking services (processing marijuana transactions violates the federal charter of most financial institutions). As a result, marijuana is mostly a cash industry.

There are a lot of fintech companies out there trying to solve this problem. And if one of them can do it before Congress either legalizes pot (that’s a few years away) or gives the cannabis industry access to banking services (that’s much closer), it could transform the industry.

Startups, crypto and cannabis. We hit the Early Investing trifecta this week. Now to the News Fix!

Cresco Labs looks to refresh and rebrand. Many marijuana dispensaries look more like industrial spaces than retail spaces. That’s because as the cannabis industry slowly gained legal status in the U.S., marijuana dispensaries tended to open up first in industrial and warehouse areas. With legal recreational marijuana sales set to begin in Illinois next year, Cresco Labs is looking to change that. Cresco, which is headquartered in Chicago, is redesigning and rebranding its stores to fit into Chicago retail corridors. And they will all operate under a single brand – Sunnyside (Chicago Tribune).

Top universities beginning to offer cannabis degrees and courses. One of the biggest problems facing the marijuana industry is a shortage of qualified employees. Actually, that’s a problem for a lot of different sectors of the economy. But the problem in the nascent cannabis sector is particularly acute. Because pot has been illegal for so long, most colleges and universities don’t have programs that provide students the cannabis knowledge and expertise needed to succeed. And because the industry is growing so quickly, the shallow pool of top talent gets snapped up quickly. But that’s beginning to change.

Tennessee accidentally invests in marijuana industry. Marijuana isn’t legal in Tennessee. But that didn’t stop the state’s pension fund from investing in the cannabis industry. Even funnier than the actual investment was the response to it. The state treasurer didn’t know about the passive investment until the media contacted him about it. And he ordered the pension managers to sell the stock immediately. But a member of the Tennessee Legislature questioned the decision to sell the stock because the stock price was still going up (WATE)!

Eighty-five percent of the total supply of bitcoin has already been mined. There are only 21 million bitcoin. And as of this week, more than 85% of that supply is in circulation. But don’t worry, we’re not running out of new bitcoin. Because the new supply of bitcoin coming onto the market gets cut in half every four years, we won’t see 21 million bitcoin in circulation until 2140 (TNW).

U.S. senator recognizes banning crypto won’t work. The Senate took another stab at trying to figure out how to regulate cryptocurrencies in the U.S. This week’s hearing didn’t have any of the drama of the Libra congressional hearings. But it did yield some news. Sen. Mike Crapo, who chairs the Senate Banking Committee, acknowledged that even if they wanted to, lawmakers probably couldn’t ban bitcoin and other cryptocurrencies.

“If the United States decided we didn’t want cryptocurrency to happen in the United States, and tried to ban it, I’m pretty confident we couldn’t succeed in doing that because this is a global tech, a global innovation” (CCN).

Rep. Patrick McHenry acknowledged this last month as well. Washington politicians are starting to understand that crypto is here for good – and that they can’t kill it. That’s a good thing for the future of the sector.

Beyond Meat surprises market with secondary offering. Okay. Technically, this isn’t startup news. But it is early investing news. Beyond Meat is currently trading at around $176. When it went public earlier this year, it priced at $25. That’s a nice 151% gain. The gains for early investors are even bigger, which brings us to this week’s big news.

Beyond Meat has decided to sell shares of the company in a secondary offering (these shares are already owned by other people – and the company). The shares will be priced at $160 per share (Reuters). The company says the goal of the secondary offering is to raise capital for marketing and more manufacturing capacity. But Early Investing Co-Founder Andy Gordon suspects something else is in play here. And he’ll explain in a terrific Mailbag item tomorrow.

The post News Fix: Two Companies at the Intersection of Startups, Crypto and Cannabis appeared first on Early Investing.

Financial Rebellions: Investors Are Pushing Back

How to Think About Bitcoin Prices and the IPO “Wealth Effect”

How To Invest in Complex Concepts

Lessons Learned from More Than 100 Investments